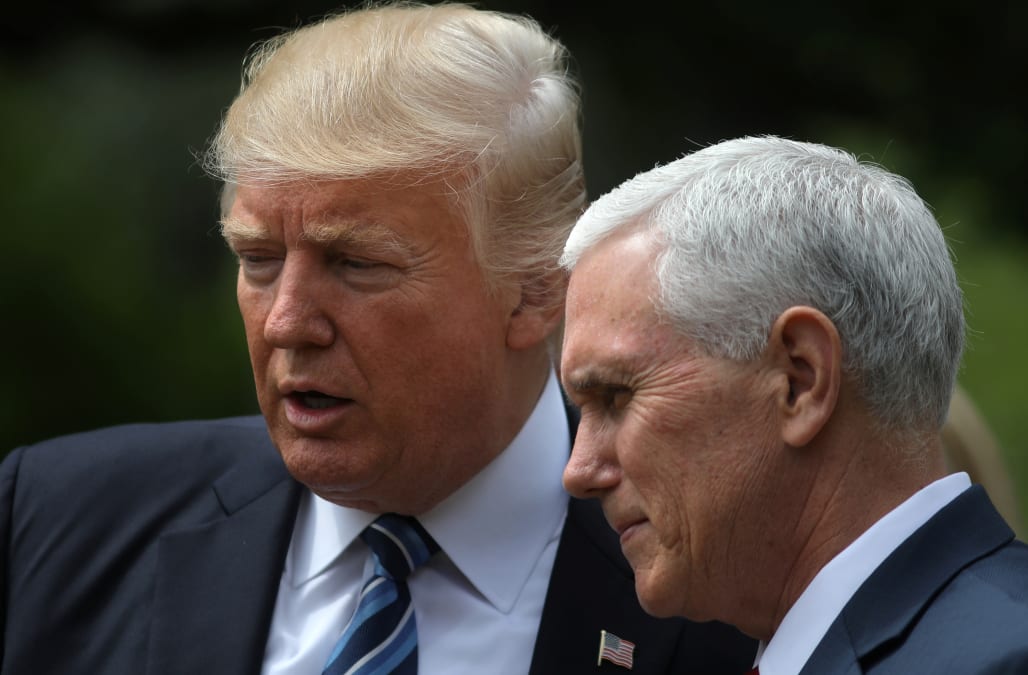 WASHINGTON, Aug 4 (Reuters) - When President Donald Trump scolded U.S. lawmakers on Thursday for clamping down on Moscow with new sanctions, his message clashed with the one that Vice President Mike Pence pushed during a four-day trip this week to Eastern Europe.

As he toured Estonia, Georgia and Montenegro, Pence said the sanctions passed overwhelmingly by Congress would send a unified message to Russia that it must change its behavior.

Trump, by contrast, took to Twitter to complain that the sanctions legislation, which he grudgingly signed, would send U.S.-Russia relations to "an all-time & very dangerous low."

While some Republicans played down the divergence, critics said it exemplified an incoherent policy that would unsettle allies and fail to placate Moscow.

"There are some policies where a good cop/bad approach can work," said Michael McFaul, a U.S. ambassador to Russia under former Democratic President Barack Obama.

But McFaul added that in the case of the Trump administration's policy toward Russia, Moscow was likely to view the mixed signals as a sign of policy disarray.

If the Republican president continues to want improved relations with Russia, "he's not achieving his goal," McFaul said.

The White House's two-track approach is mirrored in Moscow.

After Trump signed the new sanctions into law on Wednesday, Russian Prime Minister Dmitry Medvedev, the No. 2 in the Russian ruling hierarchy, launched a blistering attack on the White House.

Yet Russian President Vladimir Putin -- who has tried to cultivate a personal rapport with Trump in phone conversations and face-to-face meetings at a summit in Germany -- has not uttered a word in public about the sanctions since Trump approved them.

Trump has repeatedly said he wants better ties with Russia. But the country has loomed large over the first six months of his administration as a special counsel and U.S. congressional panels investigate allegations Moscow meddled in the 2016 U.S. election to help Trump and also examine any potential role by Trump aides.

Moscow denies any meddling and Trump denies any collusion by his campaign.

After Congress passed the sanctions legislation with a large enough margin to override a presidential veto, Trump signed it on Wednesday but criticized it as infringing on his authority and said he could make "far better deals" with governments than Congress could.

As a countermeasure to the sanctions, Putin called for reducing the staff of the U.S. diplomatic mission by 755 people and for the seizure of two properties near Moscow used by American diplomats.

Jarrod Agen, deputy chief of staff to Pence, insisted that Trump and Pence were "completely aligned" on Russia.

He added that Pence and Trump spoke every day during his trip and sometimes multiple times a day.

The disconnect between Pence and Trump on Russia is an anomaly. Pence usually goes to lengths to emphasize his loyalty to his boss and to downplay any differences.

Their different tone on Russia dates back to the U.S. presidential campaign. While Trump often praised Putin, Pence called the Russian president a "small and bullying leader" during a vice presidential debate last October.

During his trip this week, Pence condemned Russia for its "occupation of Georgia's soil" as he spoke to U.S. and Georgian troops engaged in joint exercises only 40 miles (64 km) away from Russian troops in South Ossetia.

In Montenegro, Pence accused Russia of trying to "destabilize" the western Balkans - a message criticized by Moscow.

Russia's Foreign Ministry said it was "regrettable to note that Washington is sliding ever deeper into the primitive ideology of the Cold War era, which is completely detached from reality."

Traditional Republican conservatives - who favor a hard line on Moscow - have taken some comfort in Pence's message, as have foreign leaders concerned about the impact of a rapprochement between Trump and Putin.

"What he (Pence) is saying is good and helpful and should be the policy of the Trump administration – and so for those of us who want it to be that way, we're happy to embrace it," said Danielle Pletka, senior vice president for foreign and defense policy studies at the American Enterprise Institute.

"None of us know what Donald Trump thinks in his heart of hearts about Russia," Pletka said. But she added: "If (Trump) were not comfortable with Pence making this trip, Pence would not be making this trip."

Republican Bob Corker, chairman of the Senate Foreign Relations Committee, said he would not "read a lot" into the different tones struck by Pence and Trump, although he welcomed Pence's trip to the European countries.

A former U.S. official, who spoke on condition of anonymity, was at pains to explain the disconnect between Pence and Trump on Russia.

"We are dealing with a major, open split between the president and basically the rest of his administration with the possible exception of Tillerson," the former official said. (Additional reporting by Patricia Zengerle, Arshad Mohammed and Christian Lowe; Editing by Caren Bohan, Peter Cooney and Alister Doyle)