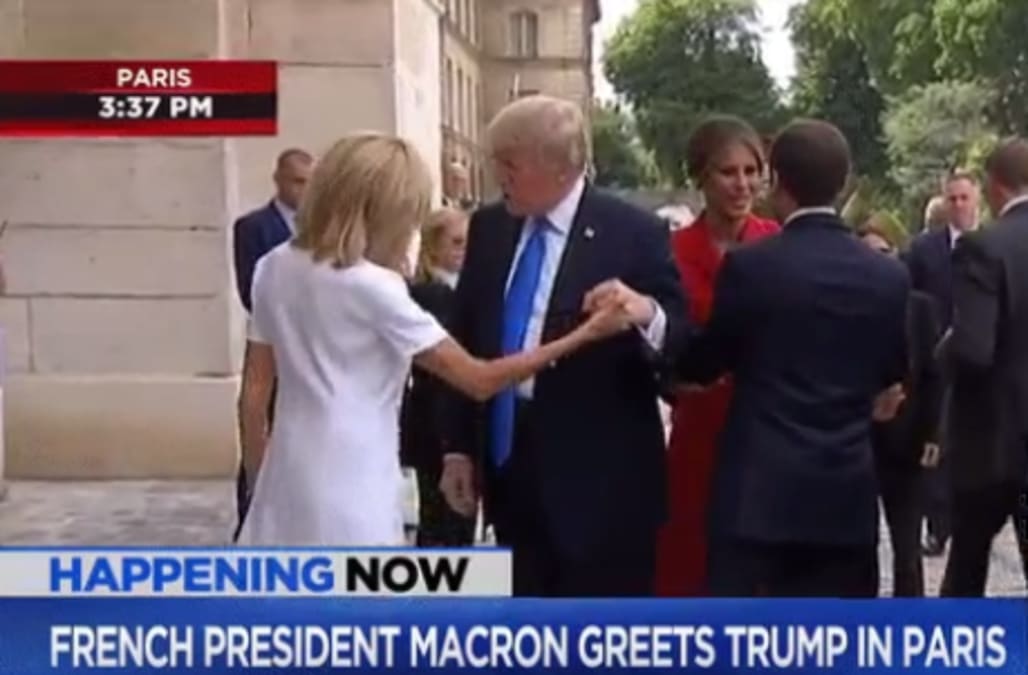 President Trump drew international headlines last week for a botched handshake attempt with the Polish first lady after misreading that her extended hand was for him, when in fact it was for his wife Melania.

And now less than a week after that awkward moment, Trump has suffered yet another bizarre handshake with another first lady -- this time with the wife of French President Emmanuel Macron, Brigitte Marie-Claude Macron.

Trump and first lady Melania Trump were welcomed by their French counterparts on Thursday morning to kick off his second European trip in two weeks. The visit was set in motion by a call Macron made to discuss international relations, during which, he invited the U.S. leader to Bastille Day celebrations on July 14.

But when the time came for a photo opportunity between the two couples the Trumps, who have had previous physical interactions abroad dominate headlines, things appeared to start off a little shaky.

President Trump and President Macron shook hands, reinforcing U.S.-France relations on a world stage, following the pair's disagreement over Trump's decision to pull the U.S. out of the Paris climate accord, but when Trump reached to shake hands with the French first lady he gave the internet another unusual sight.

The awkward handshakes continue. This time with the First Lady of France. pic.twitter.com/ac0kNbvyqM

Footage of the moment shows Trump pulling his signature "yank and pull" handshake with the French first lady -- only this time, with a clasped hand.

A clip of the moment is going viral, with many Twitter users condemning the president for his handshake with the French first lady.

"What is wrong with him? He needs handshake etiquette classes. That was nearly assault," one user tweeted, while another wrote: "This may be the weirdest one yet. He's mauling her."

What is wrong with him? He needs handshake etiquette classes. That was nearly assault.

This may be the weirdest one yet. He's mauling her.

See more reactions to the handshake:

But it's hardly the first time Trump has made headlines for interactions with other world leaders.

One can't forget when French President Emmanuel Macron described their first encounter as a "moment of truth" following the infamous white-knuckle handshake shared between the two leaders. Or the time Macron appeared to swerve Trump's open hand to hug German Chancellor Angela Merkel instead.