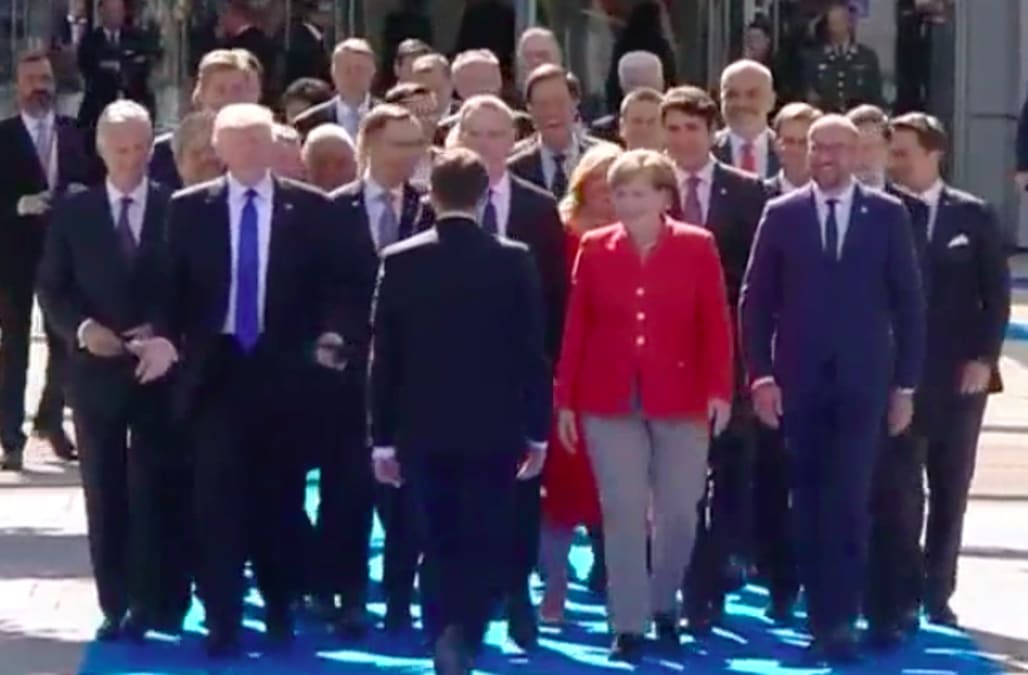 Social media was abuzz on Thursday after another video emerged of an awkward moment surrounding President Trump's body language at a NATO summit in Brussels.

After a video of Trump appearing to push past another European leader to get a prominent position at the NATO gathering went viral, another clip surfaced that seemed to show France's newly elected president, Emmanuel Macron, dodging his U.S. counterpart's handshake attempt.

SEE ALSO: Video seems to show Trump shoving NATO leader to get in front of him

In the 1-minute clip, Macron is seen walking up a blue carpet to a group of world leaders, including Chancellor Angela Merkel of Germany. At first, the French leader appears to be making a move for Trump, whose hands are outstretched in a way that suggests a warm welcome.

But, at the last moment, Macron makes a beeline for Merkel instead, then shaking hands with a few other world leaders before partaking in another socially scrutinized handshake-off with the U.S. president.

Though it is unclear as to whether or not Macron's swerve was deliberate, the moment arrives after another buzzed-about, rather fierce handshake between the two earlier this week.

Macron's post has since gone viral, with many of his followers seeming to appreciate his apparent snub towards Trump:

Twitter reacts to Macron's swerve
OH. MY. GOD. TRUMP'S FACE French PM @EmmanuelMacron swerves out of Trump's way to meet Angela Merkel first https://t.co/ctR6Q4M4YB
Fabulous shade thrown by Macron here. The swerve, the handshake order, the alpha arm pat (which Trump tries to equa… https://t.co/06iZs7TBSv
@Surf_Photo The Macron swerve was priceless
@Ex_Dubliner_APJ See Macron play a swerve blinder? Pure joy
To my absolute surprise I felt a milisecond of empathy for Trump at the moment of swerve But then he tried his hand… https://t.co/xjBFp9oISi
Macron makes a tease, a last-sec swerve away from Trump toward Merkel, and then successfully braces for Trump's psy… https://t.co/mvUJGxUzxb
The fact that Trump has both hands palms out to greet Macron makes the last minute body swerve to Merkel even sweet… https://t.co/SOlM84chZu
I'd like to see other world leaders follow Macron's example - walk towards Trump, body-swerve , greet someone else. He'd hate it.
@RationalPanic - cool dude M. Macron. That swerve to avoid the clutches of Trump & shake Merkel's hand first was quite a manoeuvre ... 😁
Up Next