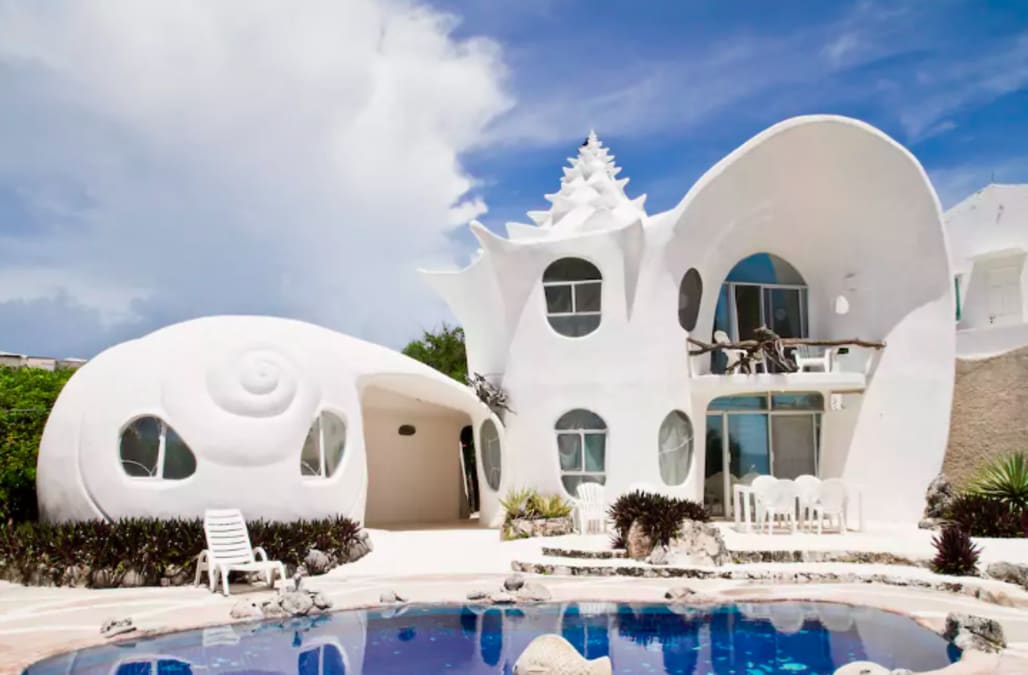 Maybe you remember that old tongue twister from when you were younger — she sells seashells by the seashore (still trips us up every time, to be honest.)

But here's a new one for you: She sleeps in a seashell by the seashore.

Living in seashell could be your reality if you head down to Casa Caracol in Isla Mujeres, Mexico.

The residence, which resembles two adjoined shells, sits on a private cliffside facing the ocean, with the best beaches on the island a short golf cart ride away.

The main shell is two stories, with a downstairs sitting area and half bath on the first floor. A spiral staircase leads to a second floor master bedroom with a second private bathroom and balcony that overlooks the custom pool and outward onto the Caribbean Sea.

The smaller shell is a one bedroom, one bathroom bungalow, featuring a shower decorated with tile and real seashells -- even the shower head is a giant conch shell!

The history of the home is almost as unique and precious as the property itself.

"In 1994 architect Eduardo Ocampo arrived in Isla Mujeres and built a house for himself (and later met his wife Maria Raquel) His brother Octavio Ocampo visited frequently, Eduardo had two pieces of land in a quaint residential area with Caribbean sea views....and wished to build on his lot for his brother.

Of course, this could not be any house. Octavio, a famous painter and needed something unique. Eduardo at first wanted a palala...but this was not allowed...having been very influenced by the "mountains" of seashells all around, he was inspired to actually construct a seashell."

The pad sleeps four total but be prepared to welcome a few unexpected house guests — The owner warns of little geckos known to be found running around inside, but hey, that's island life for you!

No word on whether or not you can heart he ocean if you press your ear to the inside of the shell house but we'll get back to you.

More on AOL.com:
'Hobbit Hut' listed on Airbnb inside of animal sanctuary
Airbnb is testing a new, long-awaited feature
4 ethereal Swiss cottages you can rent this summer for under $300