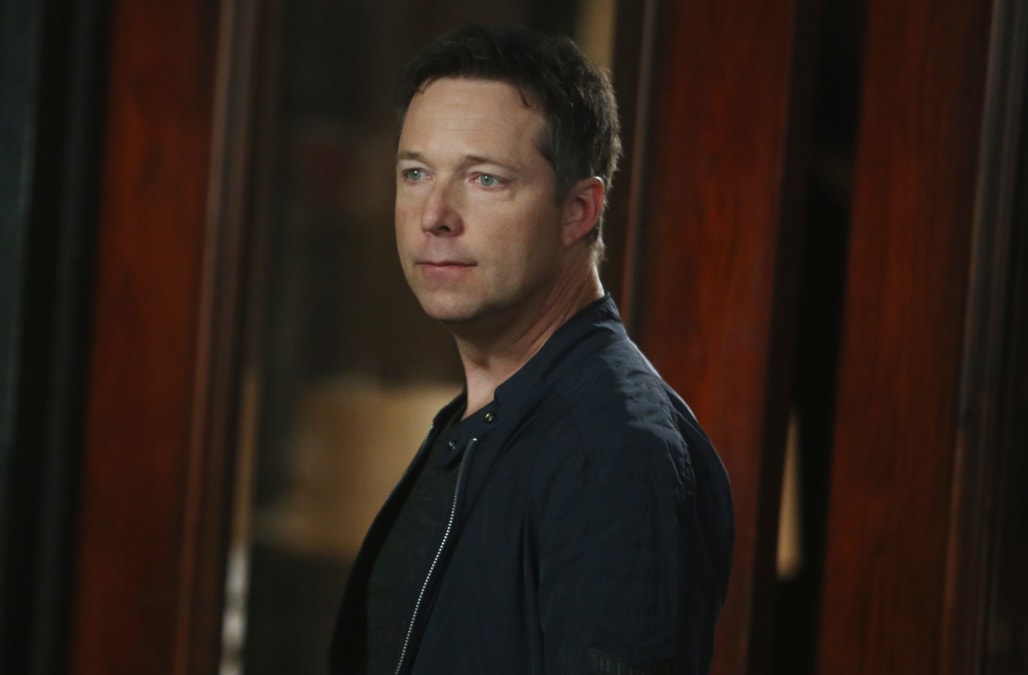 George Newbern is undergoing somewhat of a career renaissance.

25 years after starring in "Father of the Bride" as Kim Williams' future husband, Newbern is entrenched in the hottest pocket of the broadcast television schedule as Charlie on Shonda Rhimes' "Scandal."

SEE ALSO: Julianne Hough on planning a tour with brother Derek: 'It's the most stressful thing I've ever done'

Now in its sixth season, "Scandal" has garnered near constant buzz online throughout its run, and Newbern considers himself "lucky" to be part of that. Initially brought on as a hired assassin that would pop in and out of the show, his character is now a constant presence on the show as both Quinn's love interest and a de facto employee of O.P.A.

I recently caught up with George Newbern on the phone to discuss his time on "Scandal," why he considers himself a "prude" when it comes to sex scenes and what it was like going out to lunch with the star-studded cast of "Father of the Bride."

Check out my full conversation with George Newbern below:

This season has seen a sort of return to form for "Scandal." It's been really great so far!

Yeah, I agree with you! I'm not a writer, but they've done an amazing job of being able to go away and come back so many times, you know what I mean? They seem to retain a good chunk of that enthusiasm, and I think that's a feat after six seasons.

And your character, Charlie's, role has changed quite a bit, too. You've gone from being just a hired assassin that would come in and out to more of a regular character on every episode.

I know! I like the sound of that. [Laughs]

What was that evolution like for you? Was there one moment where that change was decided?

Well, I don't really know. They don't consult me about that, but I think it evolved that way because the character can do a lot of different things in a lot of different storylines. Now that I'm romantically linked to Quinn -- which doesn't mean that he's still not a sociopath, by the way -- I think that further entrenches him in their lives. The other thing is that I think the character allows for a bit of humor and lightness to the shenanigans. I think he serves a dual purpose: He can get things done, but he's also a kind of pickup of lighter breath for the show.

And his relationship with Quinn has given a new level of humanity to the character.

Right, but they still do some terrible things [together]! [Laughs]

In your mind, what has been the most shocking kill that Charlie has had?

"Shocking"? I don't know if any of them have been shocking. I'll be honest with you, I think at the core of this guy's character, he loves it. Maybe Quinn and Huck get a little irritated with him because he doesn't think much about it. I think he's more practical about [killing], so I don't necessarily think that he's "shocked." It's interesting, because when he's in O.P.A. working with Quinn and Olivia, he's doing this for two reasons: Maybe because of his feelings for Quinn, but also because it ingratiates him a little bit into their machine. Ultimately, he wants to work and be necessary. I think he's a lonely guy, so this is a way for him to have some sort of family.

It's also interesting that, when he kills people, we don't exactly see how he tortures them first. As an actor, do you fill those moments in?

Yeah, I actually think that the best scenes are when they don't show all of that stuff. I think the gorier they get, the less effective they are. It's the same with sex scenes. The less you show, the better -- maybe I'm a prude! I think the brain fills in a lot more detail than you explicitly show on television.

Talk to me a bit about the evolution of Charlie's relationship with Quinn. Where do you see things going with them in the future?

It was interesting, because there was an earlier episode where I basically tudor Huck in B613 -- I mentored him, essentially -- and he was sort of like a little brother, but then we became estranged. Then, he had this relationship with Quinn, so now it's kind of like Charlie's dating his little brother's ex-girlfriend, which can get awkward.

Right?! It's a little twisted, but it can be worked out. I think there's an interesting dynamic there that they will hopefully mine.

You've been in this business for a long time. What new things did you learn as an actor on the set of "Scandal"?

I try to learn something new with every job that I do. I think that I've learned with this job -- and it also comes with being able to relaxing a little bit, knowing that I have future episodes coming up -- to trust the writing and the material and to have more fun with it. I think a lot of the time you're acting out of, like, "I've got to make sure I nail this!" You don't always know if it's a one-shot deal or something. I've done so many series that have been 18 or 20 episodes and then it's over -- you don't always get a long run at it -- so this has been a treat as an actor to have a show have legs and a character that stays and develops. That's just so rare, especially on television. People's attention spans are so short now that everything gets cancelled quickly.

And there's been near-constant buzz around "Scandal" during its entire run.

I know, it's amazing! It comes and goes, but it still attracts attention. People can go away and come back and still be into it. It's such a lucky thing to get to be a part of.

Before I let you go, I need to ask about "Father of the Bride." What's a memory that sticks out to you from that time, either during the filming of the original or the sequel?

I really do just have such great memories of that. Mostly, just as an actor being in Los Angeles 20+ years ago, I felt like up to that point I had done a lot of things. But, when we started work and I got to set with Steve Martin, Diane Keaton and Martin Short, and we would go out to lunch that first week during shooting, I just had an out of body experience. I was like, "What the hell just happened to me?" So, as a person and as an actor, my favorite memory from "Father of the Bride" is just going out to lunch with huge movie stars and not understanding what I was doing there. That was my biggest takeaway.

[Laughs] You know what I mean, though? It was super fun, but more than anything I just was a little overwhelmed. It was so fun, and to this day, Kim Williams and I are still great, great friends. She's a good person. That movie is perennial! It's weird, but so many generations of little girls that have gotten married have come up to me and said that they've watched the movie.

That must be pretty special.

Oh, man, it's amazing! If an actor ever gets to have one of those jobs in his life, you can just quit.

More from AOL.com:
'Summer House' star Cristina Gibson: 'Lindsay and I are really not on great terms'
Star Jones talks open heart surgery, being 'morbidly obese' and the importance of the Affordable Care Act
Connie Britton on standing up for women, 'Nashville' and her brand-new mission