Commissioner's wife dumps soda on reporter's head in shocking video: 'She deserved that' 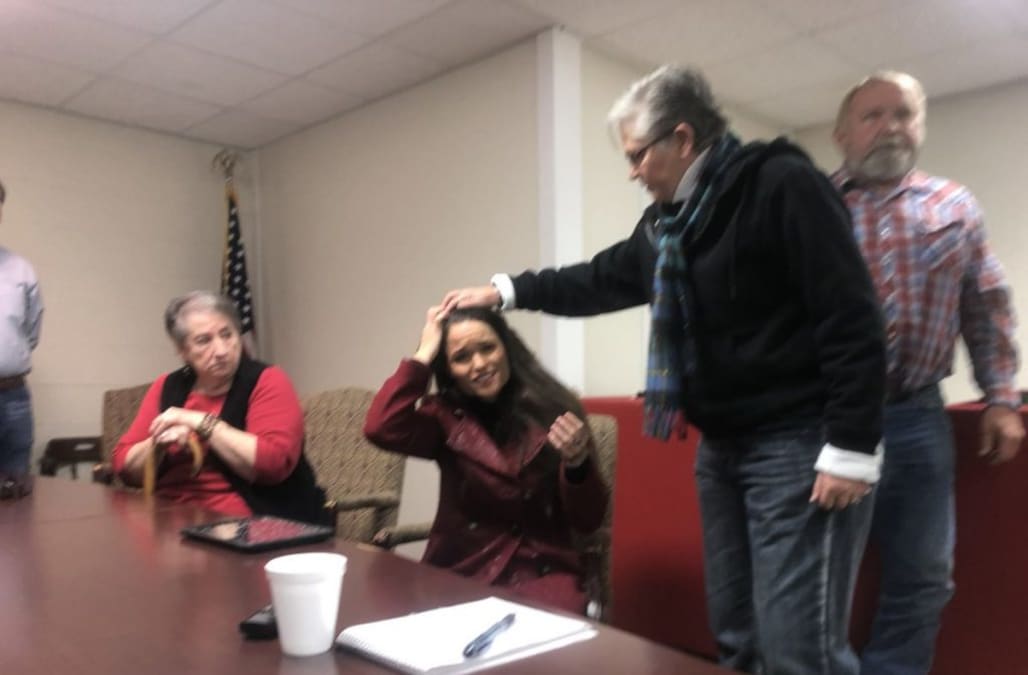 A county budget meeting in Chattooga County, Ga., took a turn on Friday when the wife of a commissioner stormed in and dumped a soda on a reporter’s head.

Abbey Winters, the wife of Chattooga County Sole Commissioner Jason Winters, was arrested and charged with simple battery and disorderly conduct for dumping soda on AllOnGeorgia reporter Casie Bryant, according to the Washington Post.

The shocking moment was caught partially on video.

In the clip, Jason Winters's jaw drops as the sound of spilling liquid echoes throughout the room.

"There you go. I’m sick of it," Abbey Winters can be heard saying.

"No, every bit of this has been brought on," Jason Winters responds.

Others can be heard saying that the 39-year-old reporter did nothing to deserve having soda poured on her.

Witnesses told police that the attack appeared to be completely unprovoked, the Washington Post reported.

"(Bryant) just sat there — in fact, we all were shocked," Paula Arden, a high school teacher who attended the budget meeting, told WTVC. "Mrs. Winters started to say, ‘She deserved that! She deserved that and more!’"

Bryant reportedly left the room, dripping with soda, without saying a word.

The wife of Chattooga County's sole commissioner poured a soda on a reporter's head this morning. The Summerville PD is charging Abbey Winters with simple battery and disorderly conduct. The reporter is Casie Bryant of All On Georgia. Photos courtesy of the Summerville News pic.twitter.com/V3pz6UbWY8

Abbey Winters told Summerville, Ga., police that she had "accidentally" poured the drink on Bryant’s head "after stumbling/tripping near her," according to the police report. Jason Winters backed up his wife's claim that it was just an accident but maintained that Bryant "deserved what happened to her," according to WZQZ.

"I’m disappointed to see not only the behavior of those involved but the excuses made for the behavior after the fact," Dutton said in a statement. "The media plays an integral role in ensuring transparency, and these types of antics are dangerous to open government and a disservice to the people it serves."

This attack on a Georgia reporter isn't even the first this month. Last week, a reporter was slapped and grabbed by a runner while covering a race in Savannah, Ga. The participant in question has since been arrested on a misdemeanor charge of sexual battery.

More from Aol.com:
Peloton actress on viral ad: 'Honestly, I think it was just my face'
All the brand new Yahoo Mail 6 features were revealed at this cool pop-up
This YouTube comedian doesn't edit anything out