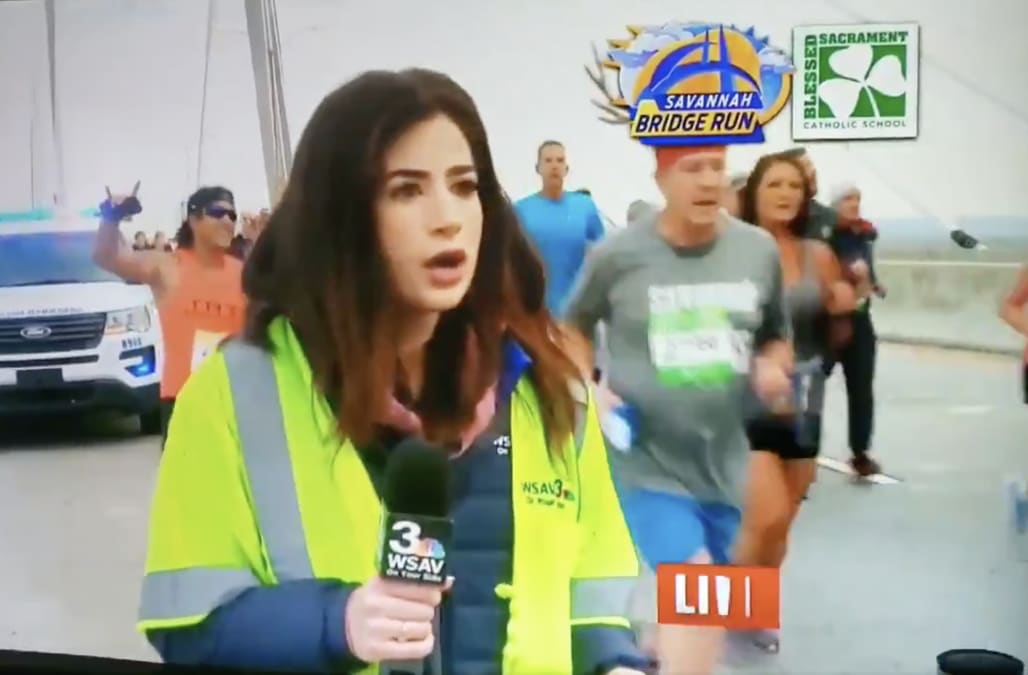 A Georgia reporter was left "violated, objectified, and embarrassed" after a man groped her on live television.

Alexandrea Bozarjian, a reporter for WSAV in Savannah, Ga., was covering the annual Enmarket Savannah Bridge Run live on-air when a participant slapped her butt while jogging past her.

A clip of the incident was posted on Twitter, where it has been viewed over 10 million times as of Monday morning.

In the video, runners are seen coming close to the camera to wave, seemingly startling the reporter.

"Woah! Not expecting that," she said as a runner nearly ran into her.

She continued reporting until a man with sunglasses ran past her and appeared to slap her on her butt. Bozarjian froze and looked stunned. She took a few seconds to regain her composure before continuing her live shot.

Bozarjian responded to the clip, blasting the unidentified man who groped her.

"To the man who smacked my butt on live TV this morning: You violated, objectified, and embarrassed me," she said. "No woman should EVER have to put up with this at work or anywhere!! Do better."

The Savannah Police Department told NBC News that they have been in touch with Bozarjian about the incident and are working with her to handle it.

"All I can say is we have made contact with Alexandrea and we are definitely going to be working with her in any capacity on how she'd like to move forward with this incident," Keturah Greene, public information coordinator for the department told NBC News.

Robert Wells, director of the Savannah Sports Council, said on Twitter that this type of behavior "will not be tolerated" at their events.

The organization was able to identify the man and said he has been banned from registering for all Savannah Sports Council-owned races.