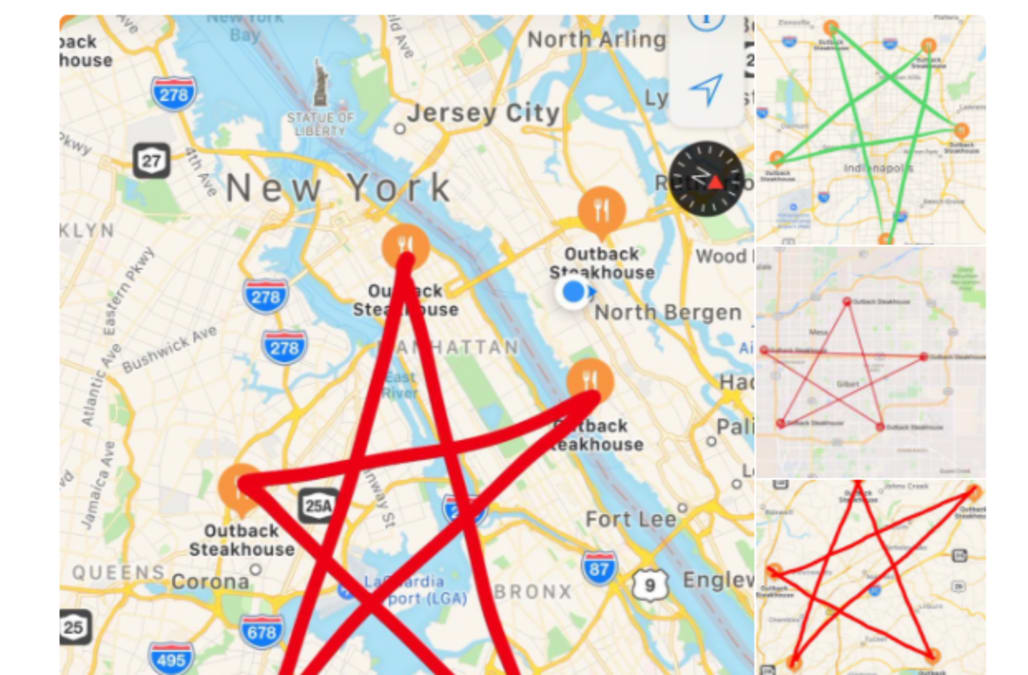 Google just about anything and there's sure to be a conspiracy theory about it, and The Illuminati is often at the forefront.

From mainstream celebrities to world leaders, the potential existence of The Illuminati is much-discussed online -- and it seems even restaurant chains aren't immune to the speculation.

Conspiratory explanations are so far-fetched that they're mostly taken as jokes -- but a recent analysis of Outback Steakhouse locations is sending chills down people's spines.

Twitter user @EatMyAesthetic did God's Work for all of us by unveiling that in several cities, the home of the Bloomin' Onion has several locations that form a pentagram -- the five-pointed star that is often associated with organizations who worship or follow that guy you may have heard of ... You know, the one who goes by SATAN!

Here's the photographic evidence we're talking about via Twitter:

So is Outback Steakhouse involved in some sort of Satanic ritualization and/or attempting to destroy the free world one restaurant location at a time?

Naturally, Outback had to respond to the buzz.

In a witty, yet suspiciously cryptic, response, the chain tweeted:

And by long we mean until the end of the work day because now we literally can't stop thinking about eating one — Maybe this is an attempt to lure us in?

Well, if we're going to be hunted down by Satanic worshippers, we should at least still get to eat the sacrificial Bloomin' Onion beforehand -- and dip us in that special sauce 'cause that's the way we want to go.