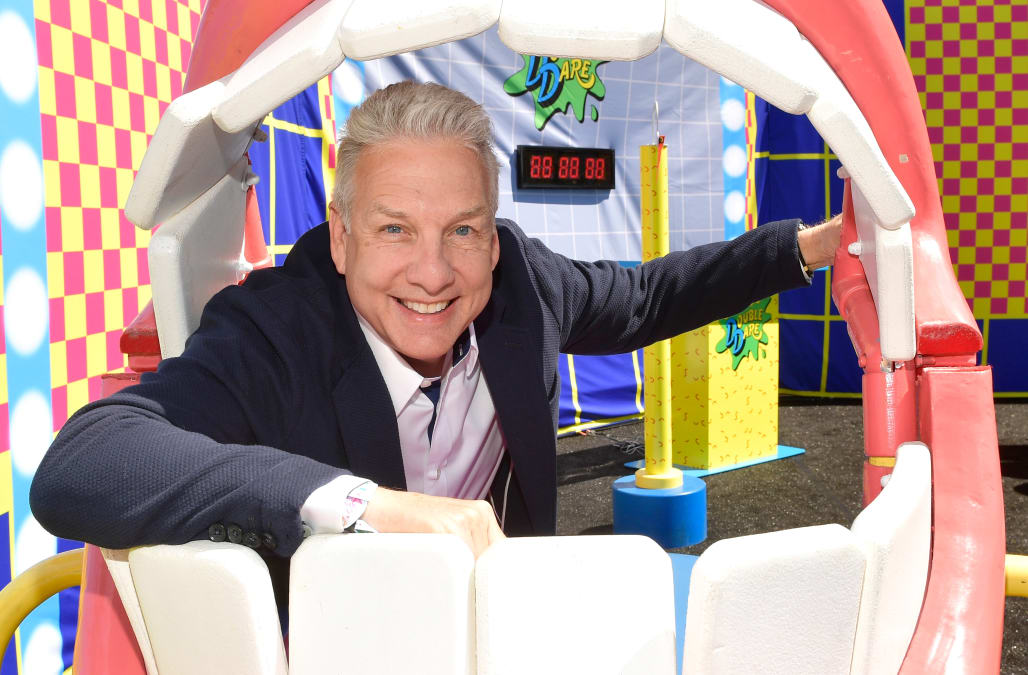 After a decade of wanting to bring "Double Dare" back to Nickelodeon, original host Marc Summers has finally gotten his wish: The network's longest-running game show, which originally aired from 1986 through 1993, will return to Nickelodeon for 40 new episodes on Monday, June 25.

"I've been after Nickelodeon for 10 years to do this," he exclusively told AOL at the the show's New York press day.

But it wasn't until Nickelodeon announced that it was bringing back universally-beloved hits like "Blue's Clues" and "Clarissa Explains It All" that Summers truly took matters into his own hands to get the network to give "Double Dare" the same fate.

"When I read that they were bringing back 'Blue's Clues' and 'Clarissa,' I sent an email to executives that said simply, 'Am I getting the next phone call?'" he told us. "Two weeks later, I did. I've always been aggressive about promoting stuff. I'm an executive producer, so I'm involved with everything: New obstacles, questions, contestants, hosts."

Yes, when "Double Dare" returns later this month, Summers will not be returning as its host. In an effort to reach a large young audience, YouTube sensation Liza Koshy has been brought on to host the show's reboot. Koshy boasts over 15 million YouTube subscribers and a passionate, loyal fanbase that garners her tens of millions views on the clips that she uploads. It's that social clout that Summers thinks will help ensure that the "Double Dare" reboot will be successful.

"When we started this show in 1986, the biggest prize was an Apple computer and there was no internet," Summers recalled. "Now, the person who’s hosting the show gets 19 million views when she posts something on the web. Nobody even knew what that was back then. It’s cool and different and what we’re merging is the audience that has followed me throughout my career and the people who have no idea who the hell I am, but they know her."

For her part, Koshy described her high-profile new gig as "reliving [her] childhood" -- and noted that she "babysat for a few years," so she has experience being around kids.

"I'm already like a big kid myself, so slap 'Double Dare' and Nickelodeon into it, and I'm a baby all over again," she told AOL with a laugh. "This is literally my childhood dream. I'm excited to be part of this."

Though "Double Dare" will have a new host, most other elements of the iconic show will remain intact. During the New York press day, we partook in a mock episode of the game, complete with trivia, physical challenges, slime and more -- and it felt like the same competition we all remembered watching on Nickelodeon growing up. The physical obstacles -- like the nose! -- were all there, and that's something that Summers made sure of.

"Let’s not reinvent the wheel, because it’s really not broken," he said. "Let’s not fix something that doesn’t need fixing!"

As for advice that Summers gave Koshy about her filling his shoes in her upcoming hosting gig, he said that's one major rule that he learned from Bob Barker back in the day: It's about the contestants.

"Listening to contestants [is so important]," Summers said. "If you make the contestants stars, you will shine."

More from AOL.com:
Jordyn Woods reveals the story behind her most epic Instagram posts: Watch! (Exclusive)
'Queer Eye' star Karamo Brown reveals 'mommy and daddy' of the Fab Five
Nate Berkus and Jeremiah Brent on the 'responsibility' they feel as a gay couple in the public eye