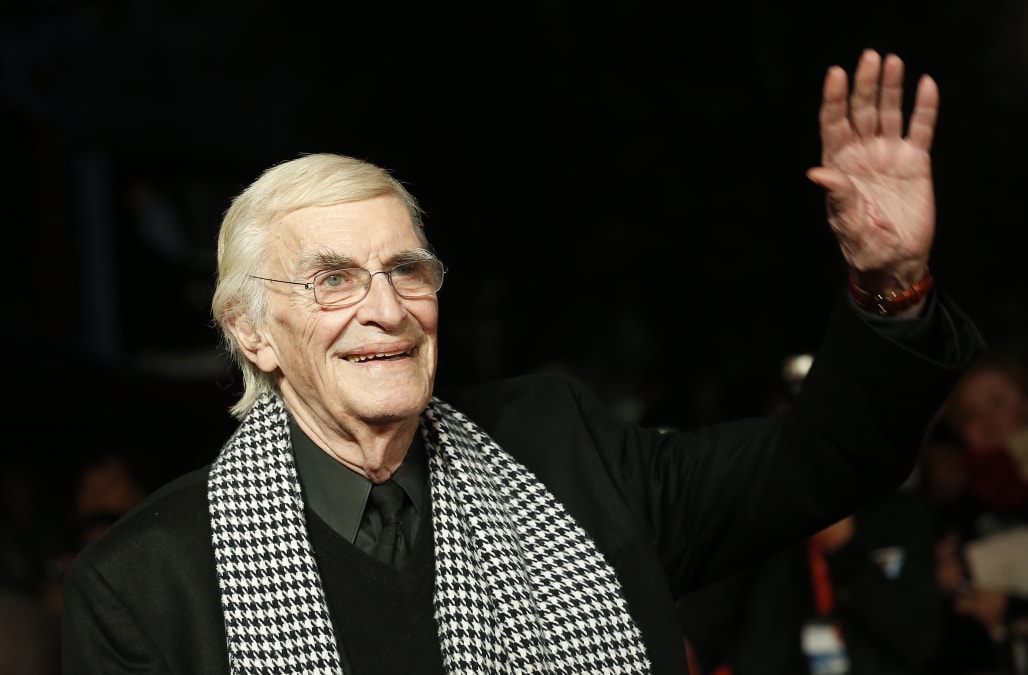 Martin Landau, the all-purpose actor who showcased his versatility as a master of disguise on the Mission: ImpossibleTV series and as a broken-down Bela Lugosi in his Oscar-winning performance in Ed Wood, has died. He was 89.

Landau, who shot to fame by playing a homosexual henchman in Alfred Hitchcock's 1959 classic North by Northwest, died Saturday of "unexpected complications" after a brief stay at UCLA Medical Center, his rep confirmed to The Hollywood Reporter.

After he quit CBS' Mission: Impossible after three seasons in 1969 because of a contract dispute, Landau's career was on the rocks until he was picked by Francis Ford Coppola to play Abe Karatz, the business partner of visionary automaker Preston Tucker (Jeff Bridges), in Tucker: The Man and His Dream (1988).

See Also: George A. Romero, father of the zombie film, dies at 77

Landau received a best supporting actor nomination for that performance, then backed it up the following year with another nom for starring as Judah Rosenthal, an ophthalmologist who has his mistress (Angelica Huston) killed, in Woody Allen's Crimes and Misdemeanors (1989).

Landau lost out on Oscar night to Kevin Kline and Denzel Washington, respectively, in those years but finally prevailed for his larger-than-life portrayal of horror-movie legend Lugosi in the biopic Ed Wood (1994), directed by Tim Burton.

Landau also starred as Commander John Koenig on the 1970s science-fiction series Space: 1999 opposite his Mission: Impossible co-star Barbara Bain, his wife from 1957 until their divorce in 1993.

Remembering Martin Landau
Actor Martin Landau displays the Oscar he won for Best Supporting Actor at the 67th Annual Academy Awards in Los Angeles ,March 27. The heavily favored Landau won for his role of Bela Lugosi in the film "Ed Wood
From L-R: Actress Lisa Marie, American director Tim Burton, actor and rock star Johnny Depp, and actor Martin Landau seen during a photo call for their film "Ed Wood" which is in competition at the 48th Cannes Film Festival, May 26
Actor Martin Landau arrives for the European premiere of the film "Frankenweenie" at the Odeon Leicester Square in central London October 10, 2012. REUTERS/Suzanne Plunkett (BRITAIN - Tags: ENTERTAINMENT SOCIETY)
Actor Martin Landau holds the Screen Actors Guild Award he won for outstanding performance by a male actor in a supporting role for his role in the film "Ed Wood" at the first-ever televised awards show for the organization in Los Angeles, February 25
Actor Martin Landau announces the nominations for the 52nd annual Golden Globe Awards January 21, 1995
The winners of Best Supporting Actor/Actress and Best Actor/Actress pose for photographers March 27 with their awards backstage at the 67th Annual Academy Awards in Los Angeles. From left are Martin Landau (Best Supporting Actor), Dianne Weist (Best Supporting Actress), Jessica Lange (Best Actress) and Tom Hanks (Best Actor
Academy award winning actor Martin Landau poses with his daughters actress Juliet Landau (L), and producer Susie Landau Finch during ceremonies to honor him with a star on the Hollywood Walk of Fame, in Hollywood, December 17, 2001. Landau is currently co-starring with Jim Carrey in the upcoming film "The Majestic." In spite of his long career in both television and film, he may be best known for his work on the television series " Mission Impossible". REUTERS/Rose Prouser RMP/ME
Cast members (from L-R) Martin Landau, Catherine O'Hara, Winona Ryder, Charlie Tahan and Martin Short pose at the premiere of "Frankenweenie" at El Capitan theatre in Hollywood, California September 24, 2012. The movie opens in the U.S. on October 5. REUTERS/Mario Anzuoni (UNITED STATES - Tags: ENTERTAINMENT)
Academy Award winning actors Mickey Rooney (L) Red Buttons and Martin Landau (R) pose with a giant film clapper at a press conference October 29, 2002 announcing plans for The Motion Picture Hall of Fame in Hollywood. The new attraction will feature exhibits and multimedia attrractions about the world of Hollywood films and is expected to open in early 2004. REUTERS/Fred Prouser FSP
Up Next

A former newspaper cartoonist, Landau turned down the role of Mr. Spock in the NBC series Star Trek, which went to Leonard Nimoy (who later effectively replaced Landau on Mission: Impossible after Trek was canceled).

Landau also was an admired acting teacher who taught the craft to the likes of Jack Nicholson. And in the 1950s, he was best friends with James Dean and, for several months, the boyfriend of Marilyn Monroe. "She could be wonderful, but she was incredibly insecure, to the point she could drive you crazy," he told The New York Times in 1988.

Landau was born in Brooklyn on June 20, 1928. At age 17, he landed a job as a cartoonist for the New York Daily News, but he turned down a promotion and quit five years later to pursue acting.

"It was an impulsive move on my part to do that," Landau told The Jewish Journal in 2013. "To become an actor was a dream I must've had so deeply and so strongly because I left a lucrative, well-paying job that I could do well to become an unemployed actor. It's crazy if you think about it. To this day, I can still hear my mother's voice saying, 'You did what?!' "

In 1955, he auditioned for Lee Strasberg at the Actors Studio (choosing a scene from Clifford Odets' Clash by Night against the advice of friends), and he and Steve McQueen were the only new students accepted that year out of the 2,000-plus aspirants who had applied.

With his dark hair and penetrating blue eyes, Landau found success on New York stages in Goat Song, Stalag 17 and First Love. Hitchcock caught his performance on opening night opposite Edward G. Robinson in a road production of Middle of the Night, the first Broadway play written by Paddy Chayefsky, and cast him as the killer Leonard in North by Northwest.

In Middle of the Night, "I played a very macho guy, 180 degrees from Leonard, who I chose to play as a homosexual — very subtly — because he wanted to get rid of Eva Marie Saint with such a vengeance," he recalled in a 2012 interview.

As the ally of James Mason and nemesis of Saint and Cary Grant, Landau plummets to his death off Mount Rushmore in the movie's climactic scene. With his slick, sinister gleam and calculating demeanor, he attracted the notice of producers and directors.

See Also: 'Doctor Who': Some Excited, Others Angry as First Female Doctor Is Unveiled

He went on to perform for such top directors as Joseph L. Mankiewicz in Cleopatra (1963) — though he said most of his best work on that film was sent to the cutting-room floor — George Stevens in The Greatest Story Ever Told (1965), John Sturges in The Hallelujah Trail (1965) and Henry Hathaway in Nevada Smith (1966).

Landau met Bruce Geller, the eventual creator of Mission: Impossible, when he invited the writer to an acting class. Bain was in the class as well, and Geller wrote for them the parts of spies Rollin Hand and Cinnamon Carter. Landau earned an Emmy nomination for each of his three seasons on the series.

He could have starred in another series.

"I turned down Star Trek. It would've been torturous," he said during a 2011 edition of the PBS documentary series Pioneers of Television. "I would've probably died playing that role. I mean, even the thought of it now upsets me. It was the antithesis of why I became an actor. I mean, to play a character that Lenny (Nimoy) was better suited for, frankly, a guy who speaks in a monotone who never gets excited, never has any guilt, never has any fear or was affected on a visceral level. Who wants to do that?"

Landau found a kindred spirit in Burton, who also cast him in Sleepy Hollow (1999) and as the voice of a Vincent Price-like science teacher in the horror-movie homage, Frankenweenie (2012).

"Tim and I don't finish a sentence," Landau told the Los Angeles Times in 2012. "There's something oddly kinesthetic about it. We kind of understand each other."

On television, he starred in the Twilight Zone episodes "Mr. Denton on Doomsday" and and "The Jeopardy Room," played the title role in the 1999 Showtime telefilm Bonnano: A Godfather's Story and could be found on The Untouchables, Bonanza, Gunsmoke, Maverick, Wanted: Dead or Alive, Wagon Train, I Spy and The Man From U.N.C.L.E.

More recently, Landau earned Emmy noms for playing the father of Anthony LaPaglia's character on CBS' Without a Trace and guest-starring as an out-of-touch movie producer on HBO's Entourage. He portrayed billionaire J. Howard Marshall, the 90-year-old husband of Anna Nicole Smith, in a 2013 Lifetime biopic about the sex symbol, and starred for Atom Egoyan opposite Christopher Plummer in Remember (2015).

Landau worked as director, teacher and executive director at the Actors Studio West. He has been credited with helping to guide the talents of such actors as Nicholson, Huston, Warren Oates and Harry Dean Stanton.

Survivors include his daughters Susan (a casting director) and Juliet (an actress-dancer) from his marriage to Bain.