George A. Romero, father of the zombie film, dies at 77 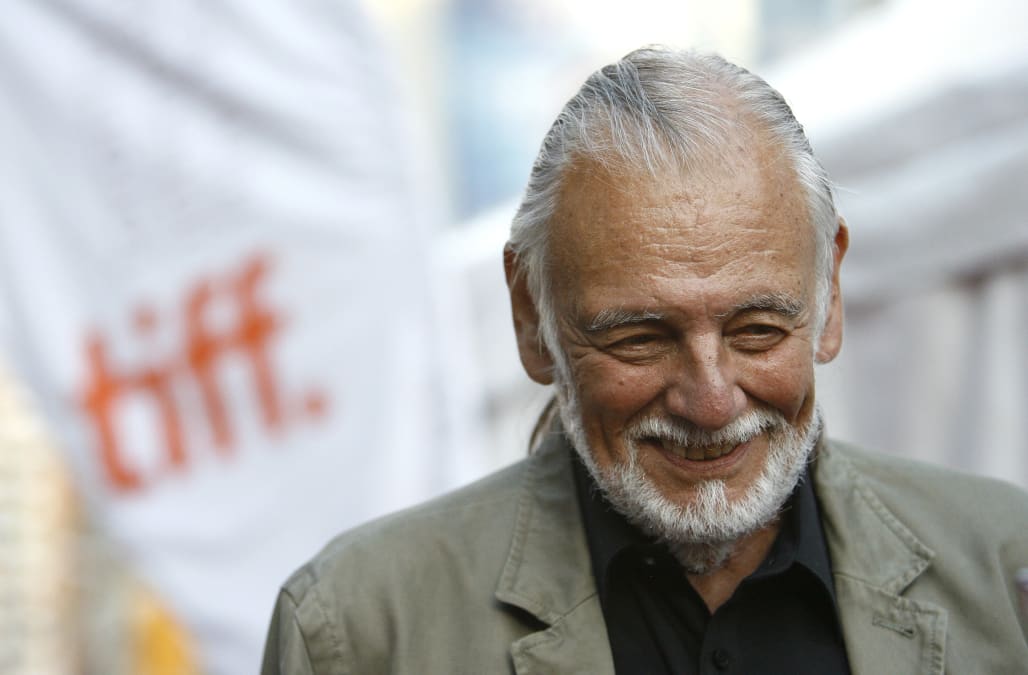 George A. Romero, the legendary writer-director from Pittsburgh who made the 1968 cult classic "Night of the Living Dead" for $114,000, thus spawning an unrelenting parade of zombie movies and TV shows, has died. He was 77.

Romero, who put out five other zombie movies after a copyright blunder cost him millions of dollars in profits on his wildly popular first one, died Sunday in his sleep after a battle with lung cancer according to a statement from Romero's producing partner Peter Grunwald to the L.A. Times. Romero's family confirmed his death to the Times as well.

See photos of George A. Romero:

14 PHOTOS
George A. Romero through the years
See Gallery

Romero also penned a new version of "Night of the Living Dead," released in 1990, that was directed by Tom Savini, his longtime collaborator and horror effects guru. (And "Dawn of the Dead" was remade by Zack Snyder in 2004.)

Some film scholars and horror enthusiasts contend that social commentary — specifically salvos against the military and materialism — lurked within Romero's films. Most of his work was shot in Pittsburgh, where Romero attended Carnegie Mellon University.

"Night of the Living Dead," the story of seven strangers trapped in a farmhouse besieged by a lynch-mob posse of staggering zombies, devastated/delighted audiences at the time of its release, its stark and grainy black-and-white cinematography imbuing it with a documentary realism.

Romero and his nine other investors, including co-writer John A. Russo, had cobbled together $6,000 to start production on the film, then titled "Night of the Flesh Eaters." It premiered at the Fulton Theater in Pittsburgh on Oct. 1, 1968, and quickly caught on as a staple of midnight screenings around the country. But most of the profits eluded the investors because of a mistake by the distributor.

"When they changed the title, the copyright bug came off, so it went into public domain [and] we no longer had a piece of the action. Everybody had a copy of 'Night of the Living Dead' because they were able to sell it without having to worry about royalties going to us."

"Night of the Living Dead" was rare for its time in that it featured an African-American actor (Duane Jones) as a hero in a mainstream movie.

He returned to the zombie milieu with "Dawn of the Dead" (this time with copyright intact), which was filmed at the Monroeville Mall outside Pittsburgh. "This was the first indoor mall we had ever seen," he said in the "Timeline" documentary. "I said, 'Wow, this is a temple to consumerism. There's my topic.' "

Once, during an AFI screening of "Night of the Living Dead," he was asked what terrified him. "I don't have any supernatural hobgoblins that I worry about," he said. "What scares me is life."

George Andrew Romero was born Feb. 4, 1940, in the Bronx. As a teen, he was crazy about movies, especially the Michael Powell-Emeric Pressburger opera fantasy "The Tales of Hoffmann" (1951). To watch it, he had to rent a movie projector and a print of the film from a movie house in Manhattan.

Romero studied art and design at Carnegie Mellon, graduated in 1960 and started a commercial production company, Image Ten Prods. He made a Calgon detergent ad that lampooned the 1966 film Fantastic Voyage and did a segment for the kids show "Mister Rogers' Neighborhood" that showed the host preparing to have a tonsillectomy.

All that helped pay for the camera his team used to shoot Night of the Living Dead. Money was tight, so the basement of his company's office on Fort Pitt Boulevard in Pittsburgh doubled as the farmhouse basement in the movie.

Romero's other work included "Knightriders" (1981), a mayhem movie with combatants jousting on motorcycles; "Creepshow" (1982), modeled after horror comics and scripted by Stephen King; "Monkey Shines" (1988), a psychological thriller revolving around a killer simian; "The Dark Half" (1993), where a writer's alter ego aims to take over; and Bruiser (2000), about a man who finds his face transformed into a blank mask.

Romero also dabbled in the world of comic books with the limited Marvel series "Empire of the Dead."

Glimpses of the man himself can be seen in many of his films, and he had a cameo as an FBI agent in Jonathan Demme's "The Silence of the Lambs" (1991).

Thanks to Romero, Pittsburgh has been called the "Zombie Capital of the World" and each year hosts an event called Zombie Fest, complete with a brain-eating contest.

"I used to be the only guy in the playground, I was the only guy doing zombies," he said in the "Timeline" doc. "Then all of a sudden 'The Walking Dead' happened and it became mainstream. And now they're all over the place."

Duane Byrge contributed to this report.