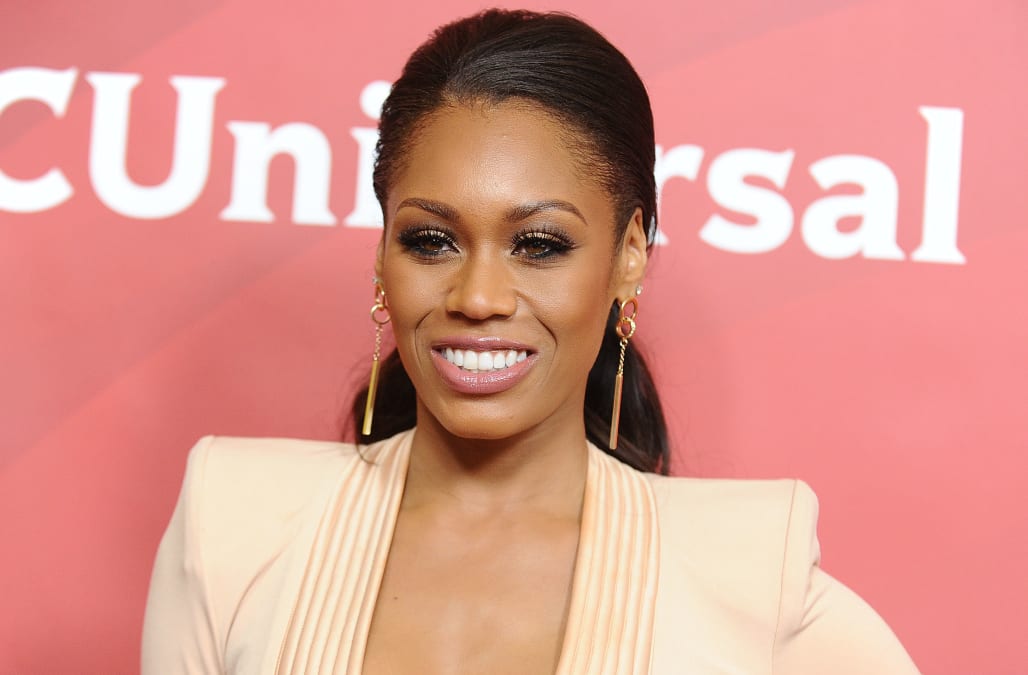 Monique Samuels didn't join Season 2 of "Real Housewives of Potomac" to do anything other than just be herself.

The mother-of-two, who's married to former Washington Redskins star Chris Samuels, joined the highly-rated franchise of the Bravo hit this year, and she has made quite the splash. From sparring with head honcho Gizelle Bryant to putting the spotlight on her contentious relationship with her mother-in-law, Monique has had already solidified her place as one of the show's most entertaining Housewives.

We recently had Monique into our office to talk about her first season as a Real Housewife, and she was -- as promised! -- a completely open book. Clad in a stunning green dress and nursing a cold, the 33-year-old opened up about dealing with the pressures of social media, how her family has reacted to being on TV and establishing her relationships with each of her cast mates.

Check out my full conversation with Monique Samuels below!

How are you holding up as your first season as a Housewife winds down?

I'm good! The thing I love about this is that I'm being me -- I'm being who I am, which makes it so I don't have to put too much energy into it. I'm just living my life, so it's been pretty easy. It's been a fun ride, and I'm enjoying it. I come from a family that loves to laugh and make light of everything. So, you're paying me to clown people and be shady and all of that? This is right up my alley!

Was there anything that you were anxious about heading into the season, though?

Initially, I was concerned with whatever perception viewers would get of me, and [I was] hoping they'd consider me in a more positive light and see me for who I really am. I've seen other reality shows where they take things and spin them, so that was the one thing I was concerned about. But I spoke with my husband [former Washington Redskins star, Chris Samuels] and he said, "Listen, don't worry about things that are outside of your grasp. Just do whatever you can do and take it from here and own whatever you need to own."

What about Chris and the kids? How are they handling being on the show?

It's been really good! My kids, man, you would've thought that they'd come out of the womb with cameras on them. [Laughs] They act like the cameras aren't even there! My daughter smiles at them and waves, and my son is like, "Can I go back downstairs with the dudes?" My husband has obviously been on camera before, and he's enjoying it. The same way that I think it's fun, he thinks it's fun.

Talk to me about the tense scene with Chris' mother, during which you had a heated war of words. What do you think of how that played off on TV?

No, my mother-in-law and I normally don't exchange words like that. That particular time, for whatever reason -- because the cameras were there -- she got really exited and was like, "I'm going to show her up!" She kept coming back to everything I said with something competitive. I was like, "Really?" She does this to all of her daughter-in-laws, but she took it to another level [that time]. I tried my best to remain calm and handle the situation.

It was very ugly, and one day my kids will see their grandmother calling their mother a "heffer." I'm not really concerned about it, but the concern I do have is that they're not going to have the relationship that they should have [with her] because of her. It was definitely disappointing, but we live, we learn and we move forward.

Has she seen the episode?

Oh, she loved it! I haven't talked to her, but Chris called her and chewed her out. I haven't received an apology or spoken to her since. I'm just not going to let it bother me. She was being 100 percent who she is. She has to deal with that when judgement day comes. [Laughs]

You and Gizelle Bryant have had quite the rocky start. Do you think she came into the season not wanting to like you?

I definitely think because I was a newcomer, that was an issue, and because I was Charrisse's friend, that was an issue. But, then, it seems like the more that she learned about the things I have and who I was married to, she [became more] focused on that, I think that's because that's what she wants and what she's been looking for. What shocked me was when she started mentioning my houses and my cars -- I didn't even know how she knew about what cars we had! I was like, "Wow, this girl is really taking notice of our bank account, our cars, our houses ... and I realized it wasn't me who had the issues. It was her deflecting them onto me. I've resolved in my mind that it's not a Monique thing -- it's her.

Karen got you both on that boat together during your trip, and it appeared as though you had a genuine moment together. Did you actually feel the tide turning with her in the moment?

Before that -- when we were on the bus and she made the comment that I would not be here if it weren't for my husband and his bank account -- it clicked right there, and I basically decided that I would give her the same relationship that I have with my mother-in-law, which is that I'm going to deal with you only because I have to. I'm not going to feel any type of way about anything you say, because I know where those words are coming from. I was like, "I'm not going to even argue with her anymore." Because, for what? I want peace! I'm grateful and I'm blessed and I'm thankful that I was graced with a great husband.

My guard was down on that boat, so for me that was probably the best situation I could possibly be in to be more open to her. For me, once I start off on a bad foot with you, it's hard for me to turn that around.

Meanwhile, you and Charrisse have really seemed to hit it off. What makes your friendship work so well?

We are both very loyal Jersey girls, and we just have this connection. We get each other. When we talk it's not about the show; we talk about everything and marriage and being moms. She does a lot of work in the community and is a very philanthropic person, which I admire. She has taken me up under her wing, and she's like a big sister to me. We're both the type of people where if you get on our bad side, you don't want to cross us...

One of the major storylines throughout this season has been Karen's living situation. What do you make about that and how the other women were speculating about it?

Oh, my God! First of all, when I watched that scene, I was oblivious! I was in the kitchen talking to the designer, and I could not believe how they were like, "I'm going to dethrone you!" I'm the kind of person who doesn't want a title, because that makes an expectation for people. I felt bad for Karen, because I felt she was literally being attacked. Me and my husband traveled back and forth between Alabama for four years, so I know how moving can really affect you. Take Karen, who has lived in Potomac for 20 years! She's been accustomed to that for so long, and I thought they could be more compassionate, but she could've also been more forthcoming with more of the details. But let her keep her title -- I don't want it! I was definitely disappointed in how they were treating her.

Part of being on these Bravo reality shows is dealing with the social media side of fame. Are there any things you've been surprised about that people have picked apart on social media?

Two things that stick out in my mind right now. Very early on in the season, I said that the order of my household is God, my husband and then the kids. They looked at that as if I was speaking about my children's needs versus my husband's needs, when I was speaking specifically about marriage. In our house, our marriage is grounded on God, and then our marriage comes before our kids, because it was established before our kids. And, if our marriage is intact, my kids are going to be happy and grow up feeling full of love.

Next, just recently, I was so sick of hearing about this rumor that Charrisse [was dating] this fireman. So, before we got to a break [on "Watch What Happens Live"], I said that Charrisse isn't dating a fireman. Some people took it for what it was, which was that I was sick of the fireman rumor. Other people took it as me putting the occupation down! When Andy was like, "People are buzzing about this comment on the fireman, do you think that's below Charrisse?" I was like, "Whoa!" First of all, my great uncle was the chief fireman. He ran the show. That is a huge responsibility, and I would never put a person's occupation down, especially service men and women. I could care less what a person does, as long as you have a job!

On the flip side, you must hear from new fans on social media all the time now. What's that been like?

It's been really fun. I'm so overwhelmed and grateful for the support that I've been getting. Because I've opened up my home on the show, they're like, "I feel like I know you!" And I'm like, "You do!" Even with with the negative comments, I learn something from them -- as long as you're respectful.

Would you do the show again?

I would definitely do it again! As long as it doesn't interfere with my marriage or my kids.

"The Real Housewives of Potomac" airs on Bravo on Sundays at 8 p.m. EST

More from AOL.com:
Laverne Cox: 'I feel more included than I ever have as a trans woman of color in the LGBTQ community'
'Black-ish' star Anthony Anderson gushes about Yara Shahidi, says he feels no pressure to be political
Ed Sheeran says he had 'no idea' 'Love Yourself' by Justin Bieber would be a hit when he wrote it