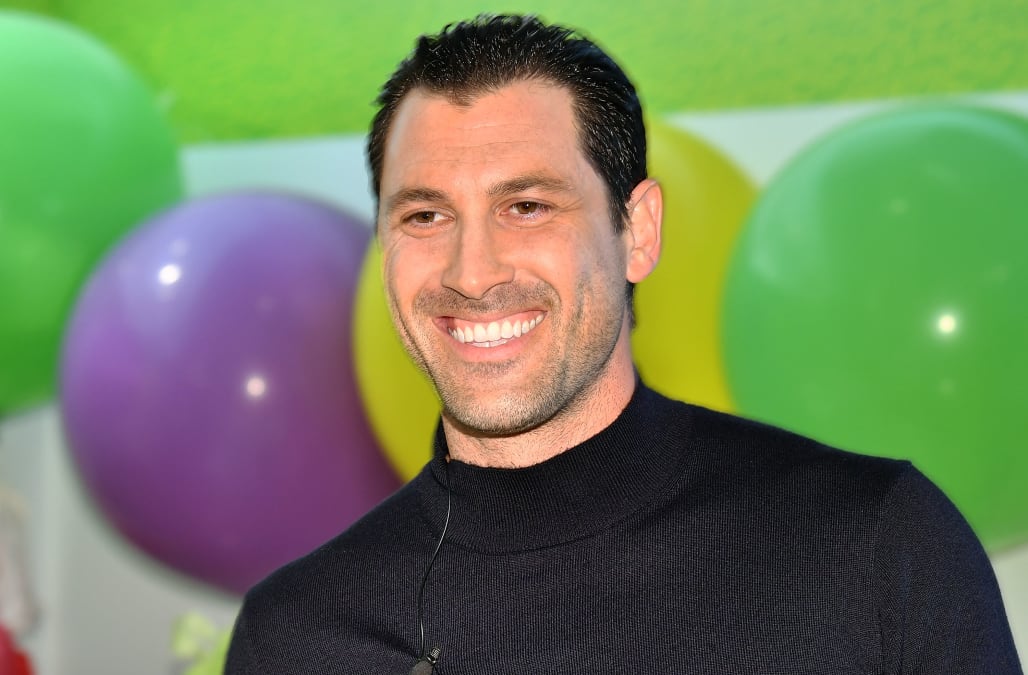 Maksim Chmerkovskiy is "not worried" about the backlash against his "Dancing With the Stars" partner, former professional dancer and "Glee" actress Heather Morris, affecting the pair's chances at winning season 24 of the ABC hit.

Not only that, but the 37-year-old also has more important things to worry about. Namely, his newborn son, Shai, who he shares with fellow "DWTS" returning pro, Peta Murgatroyd.

SEE ALSO: Ice-T and Coco on baby Chanel: What they're going to 'steer her away from' as she gets older

When I sat down with him recently at Swiffer's 18th birthday celebration, Chmerkovskiy told me that "with love and no second thoughts" he has found himself taking extra good care of Peta and Shai, especially when it comes to cleaning and making sure they're comfortable. He also attributed the couple's seamless transition to parenthood to the "invaluable" help of their baby nurse, who has made the balance of parenting and rehearing for "DWTS" easier to manage.

Check out my full conversation below with Maksim Chmerkovskiy, where we talked about fatherhood, supporting his wife, partnering with Swiffer and who his biggest competition on the upcoming season of "Dancing With the Stars" is.

24 PHOTOS
Maksim Chmerkovskiy out and about
See Gallery

How did this partnership with Swiffer come about?

It's something that I actually use! We get a lot of requests to partner with brands, but I can't lie because I'm a straight-shooter. If you're going to have me promote something that I don't use, it's going to come across very unnatural. I always will recommend Swiffer, because it's simple. Nowadays, my phone has 47 different things it connects to via bluetooth and the last thing I want is for Swiffer to come out with some kind of complicated thing. No, I don't need that. I want it to be exactly as it is -- simple and designed to do what it does.

They're celebrating their 18th birthday, which is adulthood, if you will. I thought I was an adult for many years, and then I had a baby and realized that I was still a baby myself. [Laughs] So, with all of these new changes in my life, this partnership made sense. For me, Swiffer makes me look good and that I know what I'm doing. But, in reality, it just does the whole job [of cleaning] for me.

Have you been picking up the slack around the house since Shai was born?

I have! And with love and no second thoughts. I had a traditional upbringing, which wasn't to say that it was [a] "wife cleans, man provides" [mentality], but I'm a millennial. I want Peta to be happy with her career first and foremost, and I wanted to provide her with an environment in which she doesn't need to worry about the little things. So, that's where I pick up the slack in terms of cleaning and just providing things.

So, you want her to feel supported.

Yeah, but not supportive with just a pat on the back to tell her she's doing a good job. No, supportive in that she gets up and knows that the fridge will be stocked and the place will be clean and anything else will be taken care of. She doesn't need to worry about those things. Just think about the baby and, you know, slowly get herself back out there. Now, she's back on "Dancing With the Stars" two months after having a baby! To me, that's amazing.

I was going to say, it must be quite the balancing act to both be back on "Dancing With the Stars" while also taking care of your two-month-old.

We have a phenomenal baby nurse. It wasn't something that I planned on; it was something that just happened. All of our friends were telling us, "Don't be that couple that just says, 'Oh my mom will take care of the baby!'" No, don't do that. We wanted mom to enjoy the baby and then be able to go home. [The baby nurse] is also trained in nursing. Her overall experience is basically that of a professional mother, so that's priceless for us as new parents. It's invaluable for Peta to know that this isn't a problem -- he's not crying because something is wrong, he's crying because he just wants to be put to bed, and he doesn't go to bed just like we do. You have to put him to bed. Those things were nerve-wracking at the beginning, and [the baby nurse] has made them so much easier for us.

Getting back to "Dancing With the Stars," a lot has been made of your partner, Heather Morris', background as a professional dancer. What do you make of that reaction?

I'm having a blast just being in her company and dancing with her and not being limited by her inabilities. We've had professional dancers in the past who had previously crossed over to become an actor or a singer or entertainer. So, I'm not worried about what people are going to say. I just want everybody to understand that the show is not what I thought it was back when I was talking back to the judges and saying "this is not fair" or "why is this person here?" It's not that I've changed and have now become a hypocrite now that the shoe is on the other foot. You've known me for 15 years now and, if you watch the show, you'll know I'm not that person.

The way I look at this now is that, Heather comes from a dance background, which is our world. It's not ballroom, but it's our world, anyway. There has never been a dancer invited to be on "Dancing With the Stars" and given the opportunity to further her career the way that this show has done for hundreds of other careers. To deny her because she's "better," well, first of all, we've yet to see that and secondly, she also just had two kids and took a hiatus. You know, I'm just happy for her. If I wasn't her partner and had nothing to do with "Dancing With the Stars," then, yeah I would probably say "How is that even...?" But, halfway through the sentence I would realize it's happened before. So, you know what, congrats to Heather Morris, and this is a huge step for everybody in the dance community.

Who do you see as your biggest competition going into the season?

I'm not calling anything or saying anything, but I think [my brother] Val and Normani [Kordei] are going to do amazing. I think that I gotta keep it in the family: I think Peta and Nick are going to do great, given where he comes from. He also looks mighty similar to Nyle [DiMarco], if I do say so myself, in some of his movement, and her partnership with Nyle ended up with the trophy against, by the way, some of the people who were also dancers in the past. You never know! Nothing is a given. So far, every time we rehearse, we just smash our knees into one another. I've never had this in my entire career -- I've never hit knees with someone that much. Let's wait and see what happens.

More from AOL.com:
Andy Cohen reveals how he kept Jill Zarin's surprise cameo on 'Real Housewives of New York' a secret
'Scandal' star George Newbern on filming those torture scenes and his favorite memory from the 'Father of the Bride' set
Julianne Hough on planning a tour with brother Derek: 'It's the most stressful thing I've ever done'