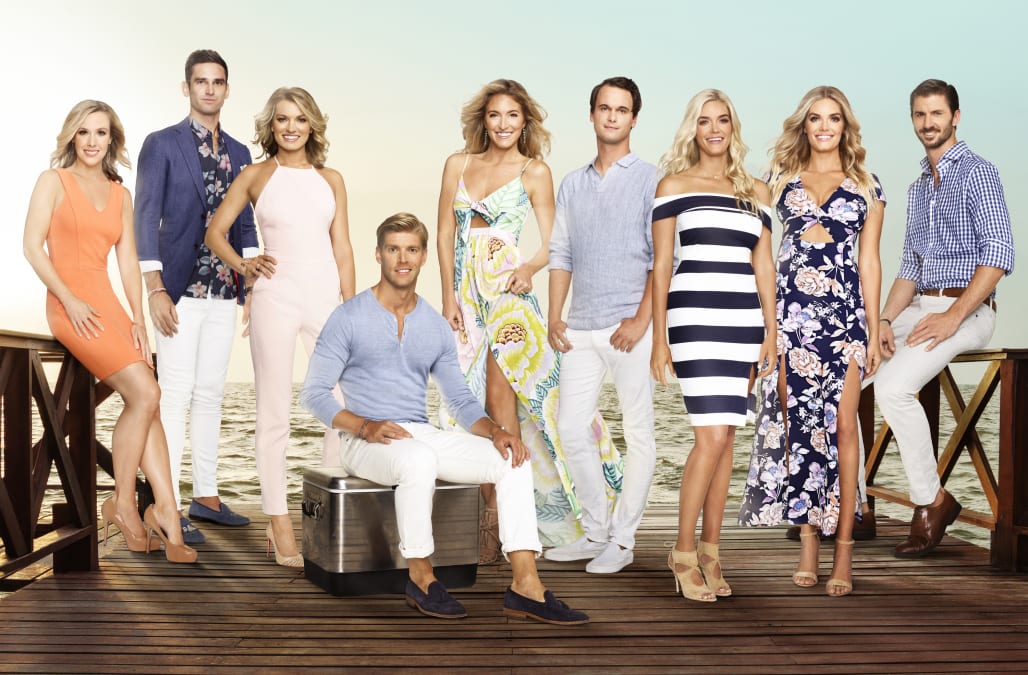 When Bravo decided to merge an episode of "Vanderpump Rules" with the first episode of its new series, "Summer House," many fans of the former show were skeptical. Was the network trying to trick them into watching something they weren't going to like?

But, if the other diehard "Pump Rules" fans are anything like myself, then it quickly became clear that the cast "Summer House" was going to act just as spontaneously in their alcohol-fueled antics as our favorite West Hollywood-based wait staff has been for five seasons now. In other words, we're in for months more of addictive reality TV.

SEE ALSO: Lisa Edelstein on 'Girlfriends' Guide To Divorce': 'It's been a wonderful experience'

"Summer House" follows a group of nine friends and acquaintances alike during their summer at a share house in Montauk. The picturesque group of New Yorkers trek out every weekend from the big city to party and swim and eat in one of the country's chicest beach towns at the "end of the world" (Long Island). Oh, and they have more than their fair share of "hot make-outs," as cast member Carl Radke put it.

I recently caught up with Carl, Lauren Wirkus and Kyle Cooke, three of the stars of "Summer House," at AOL's HQ to talk about their first season on Bravo, the worst things they've heard on social media since their show premiered and why that hot tub incident with "Vanderpump Rules" star Stassi Schroeder had Kyle Cooke ready for anything.

Check out my full conversation with the "Summer House" cast below:

How do you feel going into this first season of "Summer House"? Are you nervous? Excited? A little bit of both?

Kyle Cooke: Very excited. We had quite a bit exposure the previous Monday with the "Vanderpump" crossover, and I don't know if you've happened to see it...

Kyle: Well, with that hot tub scene [with Stassi Schroeder] out of the way, I'm ready for anything!

Carl Radke: It was a ton of fun and, in my opinion, it was probably the best summer of our lives.

Lauren Wirkus: We can say that we live life with no regrets normally, but definitely in the summertime that rings true. It's not that we're nervous -- it's just that we're excited that people are finally getting to see what we do.

Are there things that you think about that you did on camera that have you kind of going, like, "Oh sh-t, people are going to see that"?

Carl: We obviously did a lot of stuff, but you've got to be okay with that being shown. Maybe you had a few too many drinks or maybe you were a little aggressive, but I'll take that over a lot of other things.

Lauren: I mean, I think there will definitely be some moments where you want to cringe a little, but we're not going to be hiding under a rock [after watching these episodes], don't worry.

Kyle: And it really flew by -- like any summer does -- so when you think back, it's going to be amazing to watch. There's going to be a lot that we probably don't even recall -- and that might be booze related -- but it's also just matter of fact. It's been a while. [Laughs]

Tell me how the show originally came to be. How did the group come together?

Kyle: We've been doing this for years, and we're an existing group of friends.

Lauren: We met in Montauk -- on the train, actually!

Kyle: I think that almost everybody - -other than Carl and I, who met at a party in New York and reacquainted with in Montauk -- we all go back, especially some of the girls in the house, seven or eight years. Bravo was looking for an existing group of friends, and they found us through pretty serendipitous means.

Lauren: They had met Kyle, and then they met my sister and I, and they were like, "Do you know Kyle Cooke?" And I was like, "Well, yeah, we've been in a house together." So we had a little crew, and from there Kyle and I introduced them to a bunch of our friends, and we curated our summer house.

Kyle: What's nice is that, not everyone knows each other as well as others do, so there are some interesting dynamics from a friendship perspective.

What was it like when that "Vanderpump" crew rolled in last summer for the crossover episode?

Kyle: I hadn't watched much TV, and I knew that they have their own show, but I told Lauren and Ashley that I didn't want to know anything about them. I didn't want to judge them, and clearly I wasn't going to remember their names anyway...

Carl: They were fun! Stassi was great, but I think the other girls were a little bit fish out of water, though. They weren't ready to handle the East Coast.

Kyle: What's nice is that that day, most of us were getting to knew each other for the first time. But, since then, we've had multiple chances to hang out and get to know them at this point. I've pretty much met the entire "Vanderpump Rules" cast. It's been fun, and I actually just did Stassi's podcast. Here she was interviewing me about dating app advice, and six months prior I had been using the worst pickup lines of all time on her.

What's also interesting about this show is that, the trek out to the beach every weekend during the summer is something that a lot of New Yorkers are familiar with, but the general audience isn't.

Lauren: That's one of the reasons why doing this show was appealing to us. Living in New York, it's part of the culture to be at Penn Station at 3 o' clock on a Friday. It's packed. For us, it's something that we get to experience, but the rest of the world doesn't. So, yeah, that's one of the reasons why I wanted to put myself out there. It's an interesting story to tell, and they should get to experience it.

Kyle: Obviously, New York's reputation is that we work a lot, right? And we also go out a lot. What better way to show the "work hard, play hard" lifestyle [than this show]? In the summer, you are almost living two lives. That's the only way I can really put it.

Lauren: We're pounding pavement in this concrete jungle, so who doesn't want to go to the beach? We're willing to make that trek, just so we can get out of the city and the sweat and the grime. It's so worth it!

That being said, are we going to see any of the things that go down during the work week?

Carl: You get a little taste. Enough that you know that we don't just hang out at the beach all summer.

Lauren: All of us worked our full-time jobs during filming.

Carl: I think that's what makes it fun, though, because you don't just stay the whole summer. You go back to the city, you work really hard, you make money and then you go and spend it all in Montauk. [Laughs]

Kyle: We'll see it unfold as everyone else does, but it's a tough balance, and everyone can relate to that in New York. And, now, people that don't understand that struggle will get a nice glimpse into that.

I read that there were some places in Montauk and around the Hamptons that didn't want you to film there. Did you have trouble getting people to allow you to film in some locations?

Lauren: No matter where you go, if you're filming a reality TV show, there are going to be people that push back, but we had really great experiences at all of the venues we filmed at. We definitely filmed in Montauk -- and there are definitely places that we didn't film at in Montauk -- but we enjoyed Montauk for a good part of the summer, and other parts of the Hamptons, as well.

Carl: When you say "The Hamptons," that could mean 30 different parts of Long Island. Everywhere we filmed was super fun and supportive, and we really didn't have any problems. We were good energy, we said "please" and "thank you"...

What can you tease for us going into the rest of the season?

Carl: There are going to be some hot make-outs.

Lauren: All of us are at a certain point in our lives where we have changing careers, changing relationships, exes, summer flings ... so you're gonna see a lot.

Kyle: And we spent a lot of time together. We were nine people with big personalities, changing jobs, some of us starting their own companies or in long distance relationships...

Yeah, what was it like working with your sister? Well, "working."

Lauren: It's the easiest thing. Nobody knows what it's like being an identical twin unless you are one, right? We've been together for 29 years and 9 months...

Kyle: Their longest time away from one another was during Ashley's honeymoon.

Lauren: And that was three weeks! So, now, she's on the West Coast, and it's very weird not being with her, and summer was definitely a transition point for me.

Something that comes along with being on these shows is the social media of it all. Have you guys been experiencing the feedback on Twitter?

Carl: Listen, I was told that I have a speech impediment, and I'd never heard that before. I was a little upset, I'm not going to lie.

Lauren: We actually had this discussion last night. My sister and I have now been compared to the "White Chicks" many times. And, like, it's funny, but really? You're going to compare us to African-American males dressed up like white women with terrible contacts and terrible wigs? I can take it -- I can laugh at myself -- and I think we all have thick skin. There's been a lot of haters, but there's a lot of love too.

Kyle: I made quite the splash, but my whole thing is that, generally speaking, if people are enjoying watching it, I'm okay with it. I love making people laugh, even if it's at my own expense, and I've got a thick enough skin, where something like that hot tub scene with Stassi has me cringing, but also laughing. Even my mom thought it was funny.

Lauren: At the end of the day, none of us takes ourselves too seriously, and when we go out during the weekend, there are a lot of laughs. We're all light-hearted, fun people so we can take it.

Would you do it again?