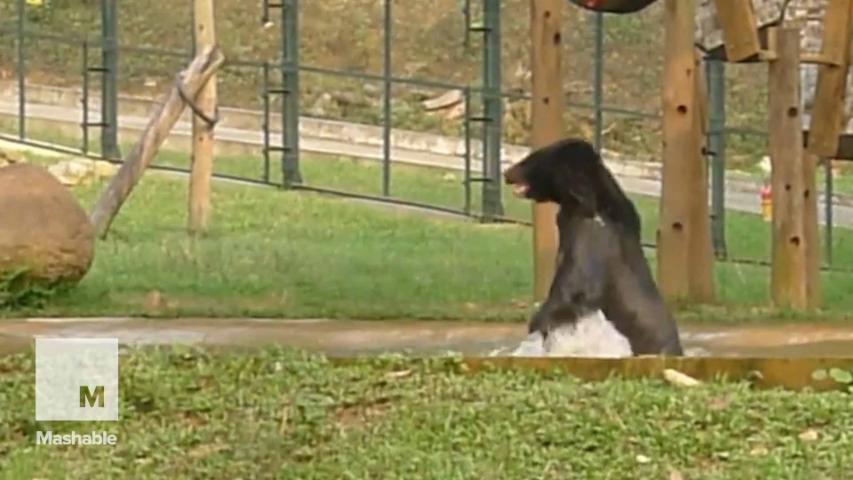 A video of a bear happily splashing in the water -- and his rescue story -- are capturing hearts across the internet.

Meet Tuffy, the cuddly cub that was captured on video jumping for joy and frolicking in the water at a Vietnam sanctuary. He leaps up and down at gets so into it he even falls backward in the cutest way possible.

But the story behind the adorable moment reveals a dark reality.

Tuffy was one of six bears to be rescued from bile farms in China last year, and came to the sanctuary with gall bladder damage, cracked paws and fractured teeth, according to Animals Asia, a Hong Kong-based charity group wild and endangered animals. Tuffy's injuries and numerous gallstones indicated he had been kept in a small cage and was likely in pain for years.

See more photos of bears from around the world:

"The cracked paws are common to bile farm bears as they only walk on bars, not grass. Dehydration is likely to have contributed to this too. So for his carers to see him take to the pool so quickly after he first became ready to face the outdoors was an amazing moment," Animals Asia Bear Manager Louise Ellis said.

"Coming from years of little or no water, for Tuffy this must feel like a true oasis after being parched and in pain for so long. It must have felt like such a relief to have the freedom to splash around in the water after only being able to stand on the hard metal bars of the bile farm cage," she said.

The group says it has rescued 600 bears, but there are thousands more in bile farms across Vietnam and China.

But the good news is Tuffy's viral video may end up helping other bears in the future.