The best 15 Super Bowl commercials of all time 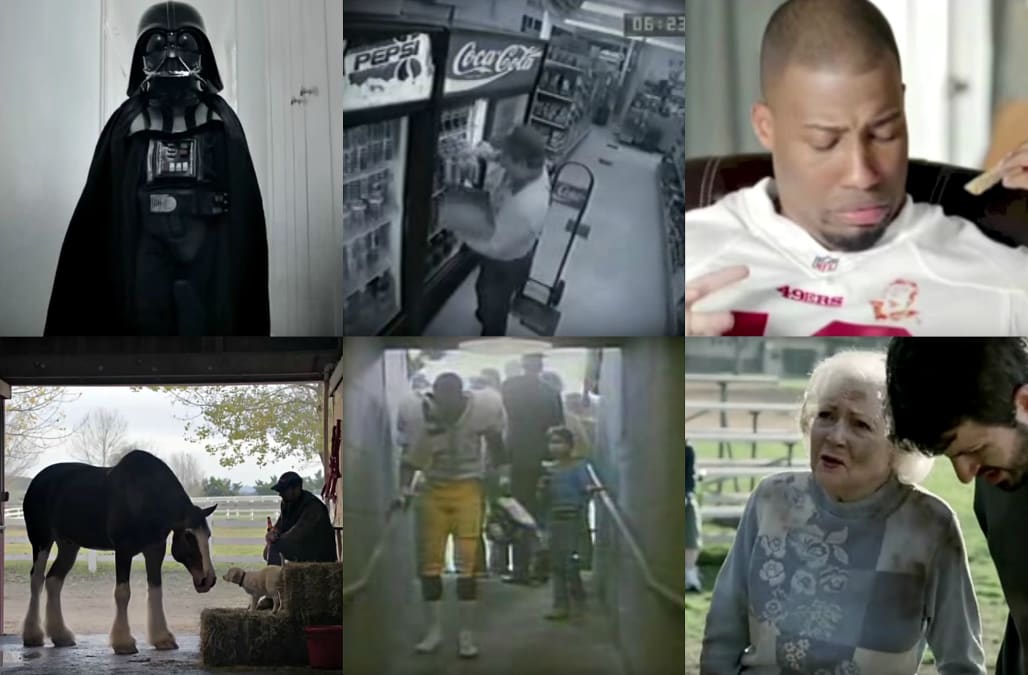 Ah, the Super Bowl. A day where our nation comes together to eat a lot of wings and revel in the camaraderie that is a good ol' fashioned game of American football.

And for the rest of us whom sports are lost upon, there are the commercials -- clearly the best part of the game.

I'm well aware that there are naysayers and die hard sports fanatics out there who will disagree with me on that. Maybe they'll even go as far as to draw some sort of parallel between me saying the commercials are the best part of the game and those heathens who say the crust is the best part of the pizza.

Here are the best 15 Super Bowl commercials ever, ranked, with absolutely no room for argument:

The 15 best Super Bowl commercials of all time

Though his team may have come up short in the 2013 Super Bowl, former quarterback Joe Montana still managed to pull off a big win in this commercial. A man watching the game drops some salsa on his 49ers jersey, resulting in a stain that happens to look just like the Comeback Kid. The miracle stain causes a media uproar and becomes a relic of worship for fans across the country until the fan's wife -- who happens to be a Baltimore Ravens fan -- "accidentally" washes Montana out with Tide. Well played.

At first glance, this commercial seems pretty stupid. But at second glance-- well, would you look at that, it really IS pretty stupid! Two men are standing in what appears to be an office break room, when one inquires about the snow globe the other man is holding. He claims it's a magic crystal ball, and, insisting he can prove it's real, asks it if there will be free Doritos at the office today. Instead of waiting for an answer, he hurls the "crystal ball" at a nearby vending machine (conveniently stocked with only Doritos), breaking the glass, and effectively answering his own prophecy. Lowbrow humor at its absolute finest.

With an aesthetic that feels more like that of an Oscar-winning movie (or maybe just a dystopian novel) than an ad, Apple definitely gets points for sheer artistry here. In an Orwellian scene, a jogger (Apple) dashes through a crowd of brain-washed lookalikes, evading security guards to knock down Big Brother (IBM) with a sledgehammer and usher in the era of the Macintosh. And judging by the fact that 32 years later we are all slaves to Job's technology (I'm willing to bet money you're reading this on an iPhone), I'd say their plan was effective. ¯\_(ツ)_/¯

Can commercials win awards for "Best Score"? If so, this one takes the cake -- erm, soft drink. A Coke delivery man tries to sneak a Pepsi from a fridge next to the one he is currently stocking, checking around him to make sure no one is looking. Immediately thereafter, all hell breaks loose and all he can do is try to slink away, hoping no one noticed, while painfully aware that EVERYONE noticed. Truly, we've all been that delivery man before.

Ah, the commercial that launched a thousand memes. This viral ad bills the attractive Isaiah Mustafa as the man your man could smell like, not that you can really get a sense of what Old Spice smells like from this cryptic slot (maybe words like "musky" or "spicy" would've been useful). Still, when you take into consideration Mustafa's devastating good looks, his soothing voice, AND the fact that he got you tickets to that thing you wanted to see -- which are also diamonds, by the way -- then why wouldn't you want your man to smell like him?

Who could've predicted that one simple question asked by actress Clara Peller in 1984 would become one of the most popular catchphrases of the decade? Three little old ladies walk into a fast-food restaurant advertised as the "Home of the Big Bun." One of the women lifts up the giant bun, revealing a disappointing morsel of a hamburger, which they all look at quizzically. In frustration, Peller shouts out "Where's the beef?!", a line that became so instantly famous it was even used as a burn in the 1984 presidential primaries.

More shots fired at Coke by Pepsi, what a surprise! A Coca-Cola driver and a Pepsi driver meet at a diner on a snowy night. They start chatting and seem to hit it off, sharing photos of their families and enjoying some laughs, but things start to go awry when the Pepsi driver offers the Coke driver a sip of his soda -- and he refuses to give it back. That'll learn ya not to come between a man and his beverage, pal.

Who would've thought that one of the most memorable Super Bowl commercials of all time would star two of the greatest NBA players of all time? Larry Bird and Michael Jordan -- both of whom can afford to buy their own McDonalds franchise, let alone hamburger -- play the most intense game of H-O-R-S-E the world has ever seen for the prize of Jordan's Big Mac and fries. And at the rate they were going, they must still be playing at this very moment. Nothing but net.

According to Snickers, you're not you when you're hungry -- which might explain why one of these football bros magically transformed into Betty White, mid-game. Clearly, all he needed was a candy bar to get his energy back up, but in the meantime, at least we got to see Betty get tackled in the mud and hilariously hurl some insults at a teammate about his girlfriend, which is just about as much of a treat as eating a Snickers. Honestly, if you could be Betty White when you were hungry, would you ever eat again? (Don't lie to yourself.)

Apparently, the old adage "he who laughs last, laughs best" holds up in the animal kingdom as well. A little old lady brings a basket containing two adorable dalmatian puppies to a very excited fire station. The pups start to vie for the fire fighters attention, but ultimately one knocks the other down and ends up being chosen. Fast forward two years into the future -- a weathered-looking dalmatian pokes its head out of a firetruck window while driving down a country road as it is about to pass a Clydesdale-drawn carriage. Sitting in the luxurious carriage with two very fancily dressed men is -- you guessed it -- the dalmation that didn't get selected by the fire fighters. The looks on both of the dog's faces say it all.

The dark side has never been so adorable. A costume-clad little boy, lovingly dubbed by the world as Vader kid, frustratedly roams around his house, trying to use the force on a variety of items that simply won't budge, including an elliptical, a washer and dryer, and a very lazy labrador retriever. Just when all hope seems lost for our young friend, dad pulls in the driveway in his new Volkswagen Passat, which happens to have a special feature that makes the boy believe the force is truly strong with him.

Commercials aren't all horses and fast food, you know. Always took the Super Bowl commercial game to the next level with this meaningful ad. Some teenagers standing in front of a backdrop are asked to perform simple actions -- i.e. run, fight, throw -- but with a twist: do it "like a girl." Every single one of them starts doing their assigned action in an overly exaggerated, almost goofy manner. When girls under ten are asked to do the same, their response is a bit different, which begs the question; When did doing something "like a girl" become an insult, anyway? It's time for that to stop.

Budweiser, you did it again. A man who breeds and raises Clydesdales develops a special bond with one of the majestic horses, only to wistfully watch it leave for the big-time. Three years later, he reads in the newspaper that the Budweiser Clydesdales are coming to town to be in a big parade. Naturally, the man goes to see his horse friend, but ends up heartbroken when the carriage passes right by him without so much as a neigh. As he begins driving home once the parade has ended, he sees the horse galloping towards him in his rear view mirror, and the two share an emotional reunion. At least I think that's what happened. Its hard to see through all these tears.

Sorry, Pepsi. You may have earned more spots on the list, but quality over quantity every day. Pittsburg Steelers defensive tackle 'Mean Joe' Greene sullenly limps towards the locker room when a young Tom Okon stops him, tells him he thinks he's the "best ever," and adorably offers him his Coke. Not even the meanest man in football could resist an offer like that, and he tosses the boy his jersey in return. Honestly, if that didn't make you smile, maybe you're the mean one here.

The last time I sobbed so hard I must've been watching Marley and Me. I was also 13 years old at the time so it was much less embarrassing. The same Clydesdale breeder who was at the center of Budweiser's last traumatic episode is going through the emotional ringer again -- only this time, its because of his lost puppy. The little labrador retriever ends up wandering into a truck that drives away without knowing he's inside. His journey lands him directly in harms way in the form of a coyote ready to attack, but just when you think the end is near for our little friend, the Clydesdales come to the rescue. As a fan of Budweiser myself, I must say: Stick to what you're best at, people -- quit brewing and go produce a movie.