Carson Wentz posts update on health after hit to head: 'It's the unfortunate part of this game' 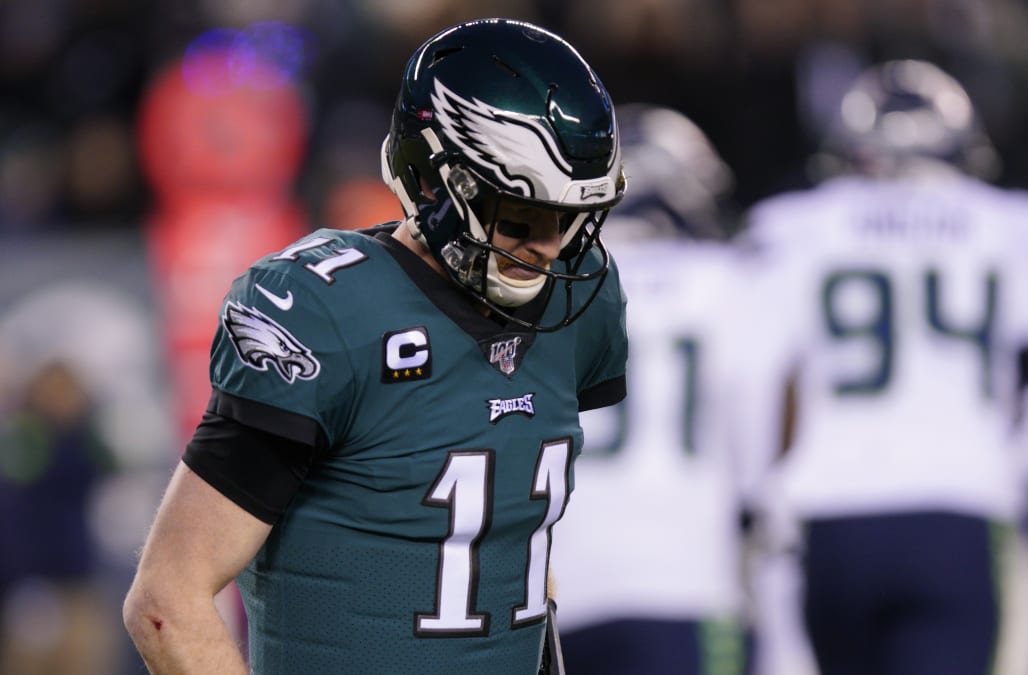 Philadelphia Eagles starting quarterback Carson Wentz posted an update for fans on Instagram the day after he was knocked out of his team's wild-card round matchup against the Seattle Seahawks.

Wentz was removed from Sunday's game, which Philadelphia ultimately lost 17-9, shortly after suffering a helmet-to-helmet hit by Jadeveon Clowney in the first quarter — though the Seahawks defender wasn't penalized for the hit.

On Monday, Wentz informed fans that he "will be just fine" in a post thanking fans for their "thoughts and prayers" after his injury.

"So dang proud of this team and how we battled and overcame so much this season," the quarterback began his message before addressing the play that caused him to be taken out of the game.

"Head injuries are a scary thing so I appreciate everybody's thoughts and prayers," he said. "Hate not being out there to finish it out with my guys because of a play like that, but it's the unfortunate part of this game."

So dang proud of this team and how we battled and overcame so much this season. Not the ending we envisioned but we will all grow and be stronger because of it! The fight and resiliency that this team displayed was so impressive. Love these guys! Also, appreciate the thoughts and prayers— Im feeling good today and will be just fine! Head injuries are a scary thing so I appreciate everybody’s thoughts and prayers. Hate not being out there to finish it out with my guys because of a play like that, but it’s the unfortunate part of this game. It’s all in Gods plan, not mine! Trusting in him 🙏🏻 Philly, year 4 was one fun ride. Appreciate the love and support— especially the real ones who were with us through the highs and lows 👊🏻 Onward to next year... big things comin’, believe that! #flyeaglesfly

After the game, referee Shawn Smith stated that the officiating crew saw "incidental helmet contact" that did not, in their eyes, constitute a foul. Clowney called the hit a "bang-bang play" and stressed that he did not intend to hurt Wentz.

Saturday was Wentz's first career playoff start. He was injured during the Eagles' 2017 postseason run, which culminated in a victory over the New England Patriots in Super Bowl LII.