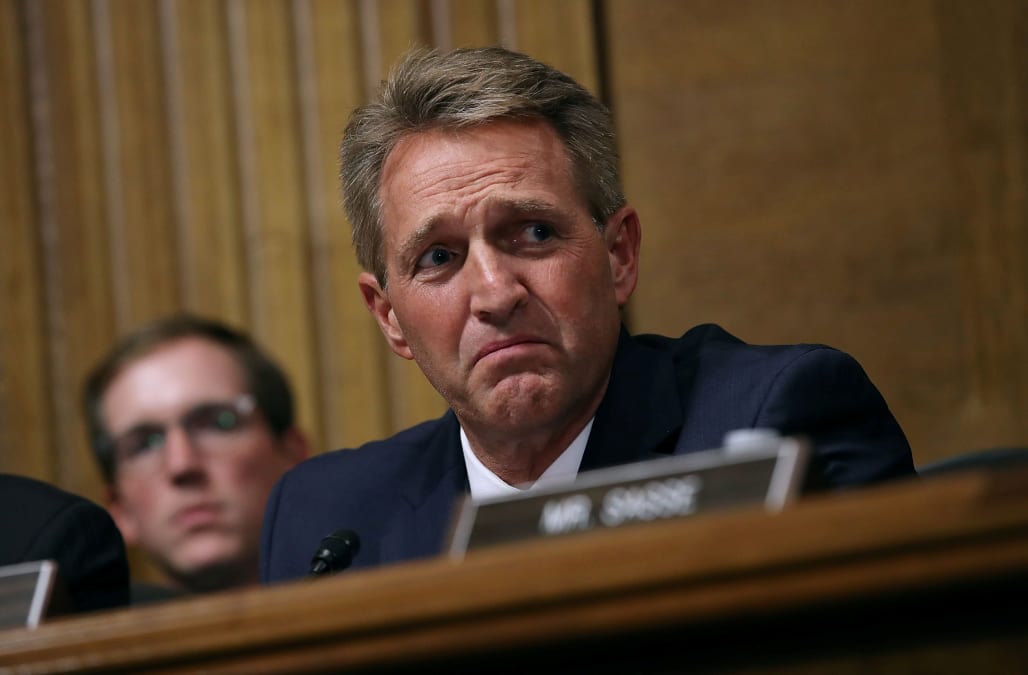 Sen. Jeff Flake said he decided to call for a delay of Supreme Court nominee Brett Kavanaugh's confirmation vote because the Senate is "just falling apart."

In an interview published Saturday in The Atlanic, Flake said his refusal to issue a vote on Kavanaugh without a week-long "pause" for an FBI investigation into the allegations of sexual misconduct against Kavanaugh was a last-ditch effort to overcome partisan battles that have plagued the confirmation process.

"The US Senate as an institution—we’re coming apart at the seams," the Arizona senator said. "There’s no currency, no market for reaching across the aisle. It just makes it so difficult."

Flake, a key Republican swing vote, was the center of attention on Friday as he conferred with longtime friend and Democratic Sen. Chris Coons, as well as other Democrats and Republicans on the Senate Judiciary Committee, before making his surprise proposal.

After three women came forward with allegations of sexual misconduct against Kavanaugh, lawmakers disagreed along party lines about how to proceed. Republicans pushed to move forward with Kavanaugh's confirmation after hearing testimony from him and one of his accusers, the California professor Dr. Christine Blasey Ford. But Democrats said there had to be an FBI background check into the claims against Kavanaugh before a final confirmation vote. They also slammed Republicans for refusing to call other witnesses to testify.

"We can’t just have the committee acting like this," Flake said. "The majority and minority parties and their staffs just don’t work well together. There’s no trust. In the investigation, they can’t issue subpoenas like they should. It’s just falling apart."

Flake said he was overwhelmed by "the hearing itself, the aftermath of the hearing, watching pundits talk about it on cable TV, seeing the protesters outside, encountering them in the hall." He added that he found an ally in Coons.

Coons and Flake stepped into the spotlight Friday, both with impassioned appeals to the committee for an FBI investigation minutes after two women who say they are sexual assault survivors cornered Flake in an elevator and said that by voting in favor of Kavanaugh's confirmation, he was telling women that "assault doesn't matter."

Flake said their "poignant" accounts came after he and other lawmakers saw an emotional and widespread response to Ford's testimony Thursday. He added that all those things weighed on him leading up to the Friday afternoon vote.

Flake had released a statement that morning announcing that he would vote in favor of moving Kavanaugh's nomination out of committee and onto the Senate floor. He told The Atlantic that despite his call for an investigation, he still intended to support Kavanaugh, "unless they turn up something — and they might."