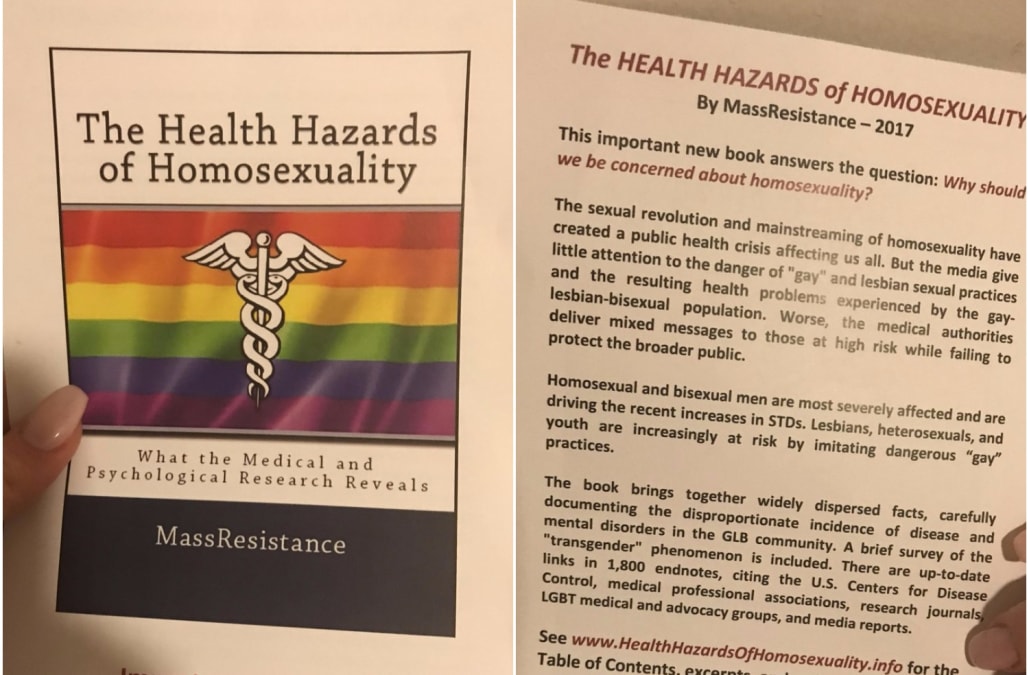 People who attended the Value Voters Summit that President Trump addressed on Friday said they were greeted with anti-LGBT pamphlets that were reportedly distributed at the event.

Pictures of the booklets allegedly handed out at the event appeared to feature insights from the book, "The Health Hazards of Homosexuality," authored by the Mass Resistance, a longtime anti-LGBT hate group based in Massachusetts, according to the Southern Poverty Law Center.

The president is addressing the Values Voter Summit today. Here's what they're giving guests in a swag bag: "The Hazards of Homosexuality" pic.twitter.com/eRufvSncc0

The material included in the booklet, which warned readers of the "public health crisis" created by homosexuals, has earned a swift reaction from Twitter users who have condemned the president for speaking before the Value Voters Summit, despite it also having been deemed a "hate group" by SPLC.

SEE ALSO: LGBT activists on Trump's impact: 'We are at war'

"Trump, who vowed to be a friend to the LGBT community, will speak to a group warning that homosexuality has created "a public health crisis," one user tweeted. "Trump is honoring a group that tells guests disease & mental disorders are rampant in the LGBT community, & endangering the broader public"

Trump, who vowed to be a friend to the LGBT community, will speak to a group warning that homosexuality has created "a public health crisis" pic.twitter.com/KRd52TCWA0

Trump is honoring a group that tells guests disease & mental disorders are rampant in the LGBT community, & endangering the broader public pic.twitter.com/26KWMjN8Ah

Some were quick to criticize Trump, who is reportedly the first sitting president to address a classed anti-gay group's "values" conference.

He's a disgusting man. Trump addressed the “hate group” and told the crowds their anti-LGBT views would “no longer be silenced”.😠

I am deeply concerned by the Trump administration’s hostility to #LGBT rights.

But many supporters have also rushed to Trump's aid, defending the president's choice to speak at the conference hosted by the "anti-gay" group, despite him having portrayed himself as a "real friend" of the gay community in the months leading up to the 2016 presidential election.

The Democrats are full of hate. They hate Trump and traditional American values. They don't want to MAGA

Among the handouts distributed at the Values Voter Summit attendees also received was a flyer urging a boycott of the Super Bowl.

Among the handouts attendees at Values Voter summit receive: this flyer urging boycott of the Super Bowl. #VVS17pic.twitter.com/At9z1WDxJb

Twitter reacts to anti-LGBT books distributed at summit Trump spoke at
US President Donald Trump speaks during the Family Research Council's 2017 Value Voters Summit on October 13, 2017 in Washington, DC. / AFP PHOTO / Brendan Smialowski (Photo credit should read BRENDAN SMIALOWSKI/AFP/Getty Images)
Value voters must know there is no attack on Judo Christian values and Merry Christmas this is just a dog whistle from Trump
Trump to speak at Value Voters LGBT hate fest. How do you feel about that @ChrisRBarron ? Still cheerleading for him?
Why are "value voters" clapping for President Trump's gutting the ACA? What values do these people have?
@SenSchumer @POTUS Nothing more comforting than listening to Tony Perkins & his "value voters" applaud trump taking… https://t.co/LBpfMlUHQb
Ten years ago "Trump speaks at Value Voters Summit" would have been a punchline. Yet here we are. SAD! #VVS17 https://t.co/lXx1HJuuV5
@rudepundit Trump "value voters?" The effing moron speaking to the oxymorons.
Trump addresses the Value Voters Summit. https://t.co/THydNrijI5
@TheWrightWingv2 How should trump be held accountable for his 13 sexual assaults? How do we move forward as value v… https://t.co/llx0pp3lEA
FIFY: Trump becomes first prez to address that Value Voters summit. Why ppl hate the media ex 435 Gazillion! https://t.co/N8xcRGlYr9
@cspan How can you speak before Value Voters summit today & last night cut $ for poor Americans who need #heathcare… https://t.co/BhxWBbBxdY
@ericbolling @realDonaldTrump I didn't know Value Voters valued sexual harassment the way you and Trump do. when wi… https://t.co/f16fA7zQcg
President Trump's speech at the Value Voters Summit was pretty remarkable. I think he really hit everything on the nail.
somehow fitting that #AltCrusade17 is the same day as the Value Voters Summit in DC feat Phares, Gaffney, Gorka, Boykin, Trump...
3X married serial adulterer & accused serial sexual assaulter Trump rallying enraptured minions at Value Voters Summit = 100% pure hypocrisy
Shouldn’t everyone at this Value Voters Summit be wearing a white hood & robe? — Scott Dworkin (funder) October 13, 2017
Up Next