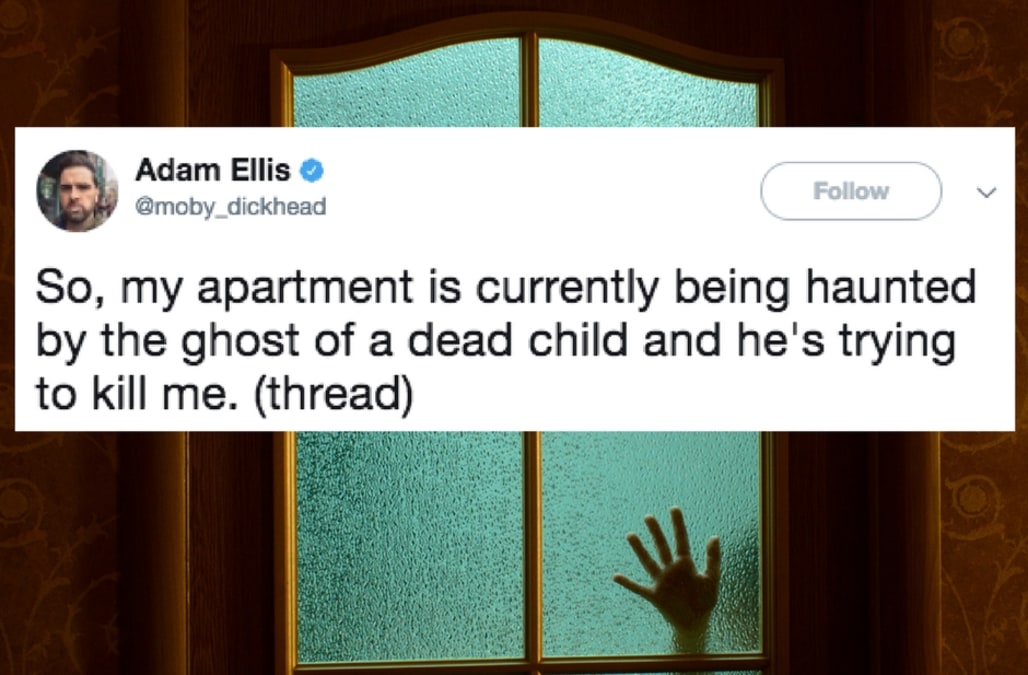 Twitter user and illustrator Adam Ellis has taken on a new title as somewhat of a ghost hunter after claiming a character from his nightmares began to appear in his home. He is now using social media to document the potential paranormal events.

Ellis claimed his ordeal began with the "ghost of a dead child" haunting his dreams earlier this month.

So, my apartment is currently being haunted by the ghost of a dead child and he's trying to kill me. (thread)

He started appearing in dreams, but I think he's crossed over into the real world now.

A few nights later, Ellis said he had another strange dream, in which a girl approached him in a library and said, "You've seen Dear David, haven't you?"

She continued, "He's dead. He only appears at midnight, and you can ask him two questions if you said 'Dear David' first."

Then she added, "But never try to ask him a third question, or he'll kill you."

Ellis went on to write that he later followed the girl's instructions and discovered David died after a shelf fell on his head in a store. But he also interrogated David further than the two-question minimum the girl advised and said he woke up screaming after David's long silence.

Click ahead to read Ellis' thread from start to finish:

71 PHOTOS
Click ahead to read Ellis' thread from start to finish:
See Gallery

Later in the month, Ellis said the strange occurrences began to subside after he was able to switch apartments in the building.

That is, until Ellis said he began to note his cats' bizarre behavior as each of them started gathering at the front door of his apartment every night as if someone wanted to gain entrance.

For the past 4 nights, my cats gather at the front door at exactly midnight & just stare at it, almost like something is on the other side. pic.twitter.com/Y8nnVLv6b4

Several weeks later, Ellis recalled in another thread on Twitter explaining a dream "where David was dragging me by the arm through an old abandoned warehouse."

He claims he awakened the next morning with a large bruise on his arm and assumed the injury sparked the dream and not the other way around.

Ellis said he's also been receiving phone calls from unknown numbers, which he, at one point, said he answered and began to hear a static noise before a small voice whispered, "Hello," on the other line.

My entire call history for the past week looks like this. You'll notice that I answered once, yesterday. pic.twitter.com/nozoMffWHs

He later installed nanny-cams in his apartment to collect more proof that someone or something was haunting his home.

SEE ALSO: Ghost of pilot caught on film at abandoned air base

"I sort of feel like I'm losing my mind," Ellis wrote. And now he's sharing footage of the strange happenings on social media.

Ellis' story has since gone viral.

Many online have been quick to offer advice to Ellis, while others suspect his strange story is nothing more than a viral marketing plot for his upcoming book.

More from AOL.com:
Tropical Storm Emily to spark localized flooding, disruptions across Florida to end July
We should never have told people to start taking vitamins, and new research linking one type to cancer shows why
Prince Charles made a joke after Prince Harry's birth that broke Princess Diana's heart