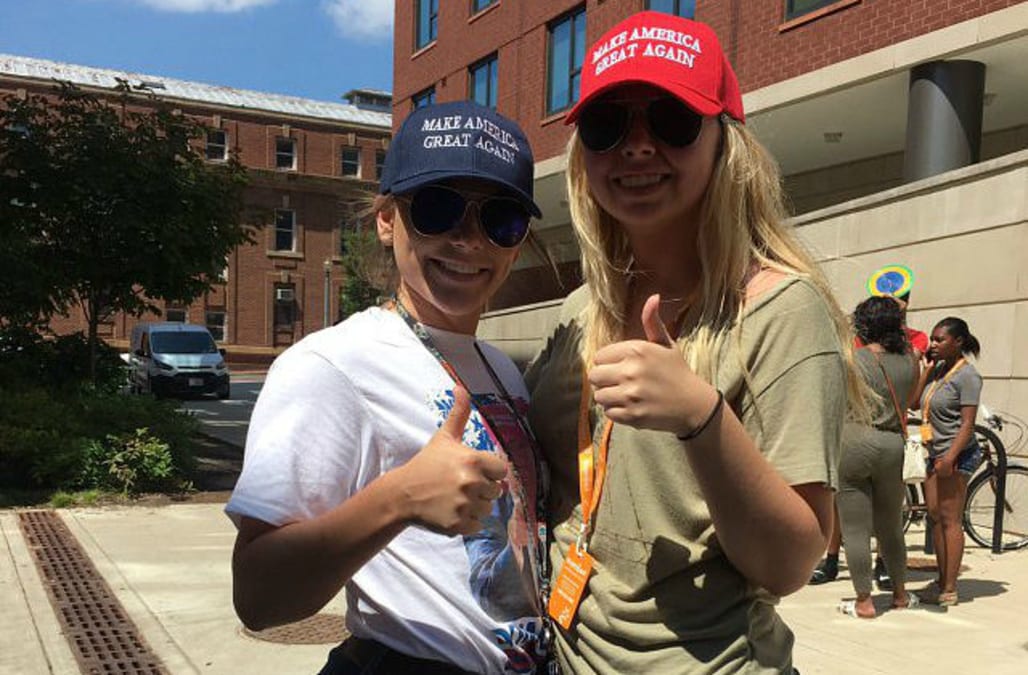 One of the teenagers, Allie Vandee, 16, tweeted about her experience on the university campus while touring D.C. with some of her classmates.

"The students took videos and pictures of us saying WE were being 'disrespectful', and that 'us being Caucasian, we should have known better,'" Vandee wrote on Twitter.

The teenager said she and her friend, identified as Sarah, did not realize that the historically black university would, in fact, be "predominantly black," but also added that race "should not matter" anyway in deciding to express their political beliefs.

The two girls, who were wearing hats and t-shirts bearing Trump's signature campaign slogan, said they were going to the dining hall when a man spotted them and said, "F--k y'all." Vandee said another man allegedly stole Sarah's cap before a school official returned it.

HU officials defended their students on Twitter following the incident, saying that they would "take action" to ensure university students "felt safe" in their dining halls.

"We will take any action necessary to ensure that HU students feel safe & comfortable in our dining spaces. This group is no longer on campus," Howard University Dining Services tweeted.

We will take any action necessary to ensure that HU students feel safe& comfortable in our dining spaces. This group is no longer on campus.

SEE ALSO: Anti-fascist stabs innocent man after haircut gets him mistaken for a neo-Nazi

"Though this is an institution where freedom of thought, choice, and expression are ever-present, we will never compromise our values or allow others to convince us to do so. We will remain committed to truth and service and boldly affirm who we are and what we stand for," the university wrote in a statement on Twitter. "Thankfully, when visitors set foot on our campus they are met with some of the brightest and best students in our nation. Howard students represent all that is right about America."

A Thread:
Today, there were visitors on our campus who were wearing paraphernalia that showcased their political support. 1/10

The NAACP chapter within the university also weighed in on the incident, tweeting that its students have "no time for white supremacists and neo-nazi sympathizers on campus."

Howard University students have no time for white supremacists and neo-nazi sympathizers on our campus. Good riddance. https://t.co/zEEQ06qDtU

Vandee claimed she continued to be harassed after departing from the university, adding that a student on the school bus called her and her friend "racist" because of their attire.

"This is America. These are the people who are being racist and disrespectful," Vandee tweeted. "It's unfortunate that Trump supporters have to fear going [some] places [more than] others. I will never be embarrassed for supporting Donald Trump. I will also support our president when, and wherever, I please. #MAGA."