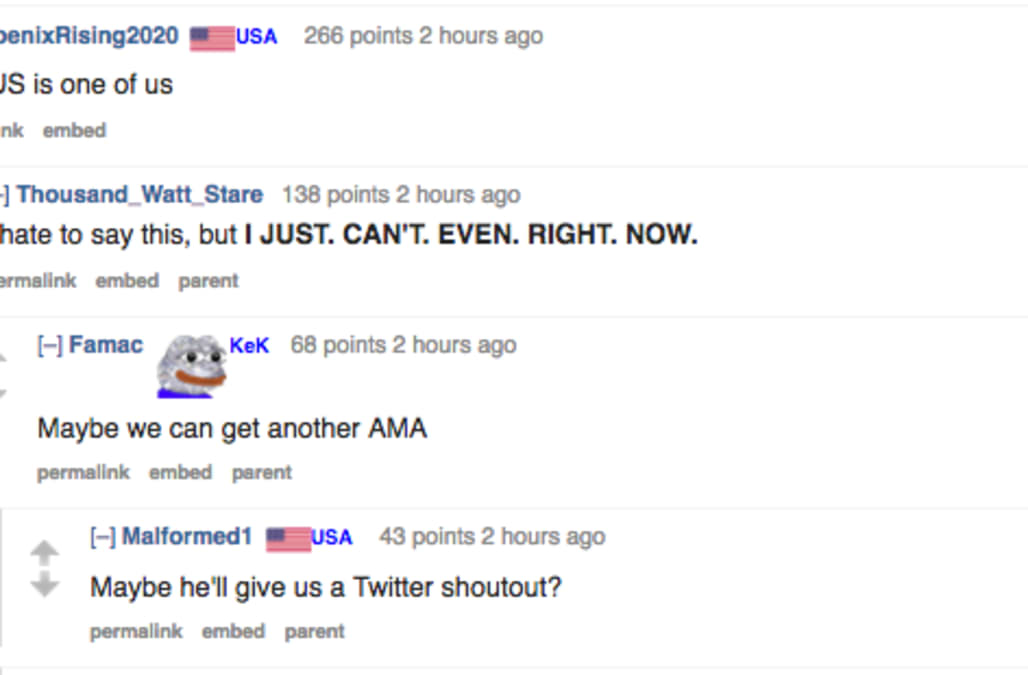 Following President Trump on Sunday sharing an edited video of him beating up "CNN," which originated on controversial Reddit forum "/r/The_Donald," the pro-Trump community has erupted in adulation, claiming they have influence over the president.

SEE ALSO: CNN gives fiery response to video Trump tweeted of him beating up the network

In a top post on the Reddit group titled, "TFW Dr. President Trump uses /r/The_Donald for sh*tpost inspiration," users claim the president's tweeting of a video that was posted four days ago on "/r/The_Donald" proves he is "one of us," meaning Trump lurks and consumes the "racism and anti-Semitism" filled content on the message board once described as a "hate speech forum."

"POTUS is one of us," user PhoenixRising2020 posted while another user under the name Malformed1 wondered, "Maybe he'll give us a Twitter shoutout?"

One Reddit user used seemingly under the presumption that he had Trump's eyes pleaded with the president to, "send more money to ICE. There is a massive illegal alien situation in California. They now outnumber the legal citizens of that state."

But users were mostly sharing their excitement over the possibility that their "GOD EMPEROR WALKS AMONGST" them.

On the first page alone more than 10 users simply shared the phrase, "one of use," referring to the president.

This is not the first time /r/The_Donald has seemingly influenced the president's online activity. BuzzFeed News pointed out that back in May, Trump retweeted a Rosie O'Donnell tweet calling for then FBI Director James Comey to be fired only 20 minutes after that same Rosie tweet reached the front page of the controversial Reddit forum.

In March the president again shared an image of Sen. Chuck Schumer and Vladimir Putin which had its origins on the pro-Trump Reddit group.

Reddit users seem to be wondering themselves just how influential they are on the commander in chief, with one user asking, "Did we create this?? Are we the President's news???"