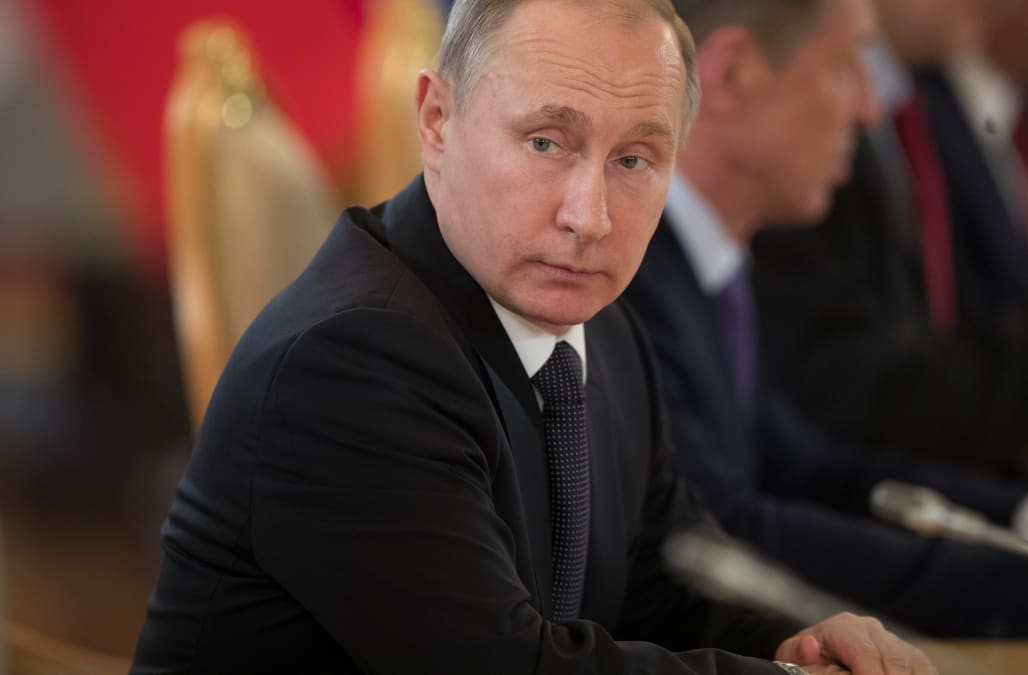 They described two confidential documents from the think tank as providing the framework and rationale for what U.S. intelligence agencies have concluded was an intensive effort by Russia to interfere with the Nov. 8 election. U.S. intelligence officials acquired the documents, which were prepared by the Moscow-based Russian Institute for Strategic Studies [https://en.riss.ru/], after the election.

The first Russian institute document was a strategy paper written last June that circulated at the highest levels of the Russian government but was not addressed to any specific individuals.

It recommended the Kremlin launch a propaganda campaign on social media and Russian state-backed global news outlets to encourage U.S. voters to elect a president who would take a softer line toward Russia than the administration of then-President Barack Obama, the seven officials said.

A second institute document, drafted in October and distributed in the same way, warned that Democratic presidential candidate Hillary Clinton was likely to win the election. For that reason, it argued, it was better for Russia to end its pro-Trump propaganda and instead intensify its messaging about voter fraud to undermine the U.S. electoral system's legitimacy and damage Clinton's reputation in an effort to undermine her presidency, the seven officials said.

The current and former U.S. officials spoke on the condition of anonymity due to the Russian documents' classified status. They declined to discuss how the United States obtained them. U.S. intelligence agencies also declined to comment on them.

Putin has denied interfering in the U.S. election. Putin's spokesman and the Russian institute did not respond to requests for comment.

The documents were central to the Obama administration's conclusion that Russia mounted a "fake news" campaign and launched cyber attacks against Democratic Party groups and Clinton's campaign, the current and former officials said.

"Putin had the objective in mind all along, and he asked the institute to draw him a road map," said one of the sources, a former senior U.S. intelligence official.

Trump has said Russia's activities had no impact on the outcome of the race. Ongoing congressional and FBI investigations into Russian interference have so far produced no public evidence that Trump associates colluded with the Russian effort to change the outcome of the election.

Four of the officials said the approach outlined in the June strategy paper was a broadening of an effort the Putin administration launched in March 2016. That month the Kremlin instructed state-backed media outlets, including international platforms Russia Today and Sputnik news agency, to start producing positive reports on Trump's quest for the U.S. presidency, the officials said.

SEE ALSO: Trump: 'Things will work out fine between the USA and Russia'

Russia Today did not respond to a request for comment. A spokesperson for Sputnik dismissed the assertions by the U.S. officials that it participated in a Kremlin campaign as an "absolute pack of lies." "And by the way, it's not the first pack of lies we're hearing from 'sources in U.S. official circles'," the spokesperson said in an email.

Russia Today and Sputnik published anti-Clinton stories while pro-Kremlin bloggers prepared a Twitter campaign calling into question the fairness of an anticipated Clinton victory, according to a report by U.S. intelligence agencies on Russian interference in the election made public in January. [http://bit.ly/2kMiKSA]

Russia Today's most popular Clinton video - "How 100% of the 2015 Clintons' 'charity' went to ... themselves" - accumulated 9 millions views on social media, according to the January report. [http://bit.ly/2os8wIt]

Vladimir Putin throughout the years

The report said the agencies did not assess whether Moscow's effort had swung the outcome of the race in Trump's favor, because American intelligence agencies do not "analyze U.S. political processes or U.S. public opinion." [http://bit.ly/2kMiKSA]

Neither of the Russian institute documents mentioned the release of hacked Democratic Party emails to interfere with the U.S. election, according to four of the officials. The officials said the hacking was a covert intelligence operation run separately out of the Kremlin.

The overt propaganda and covert hacking efforts reinforced each other, according to the officials. Both Russia Today and Sputnik heavily promoted the release of the hacked Democratic Party emails, which often contained embarrassing details.

Five of the U.S. officials described the institute as the Kremlin's in-house foreign policy think tank.

The institute's director when the documents were written, Leonid Reshetnikov, rose to the rank of lieutenant general during a 33-year-career in Russia's foreign intelligence service, according to the institute's website [http://bit.ly/2oVhiCF]. After Reshetnikov retired from the institute in January, Putin named as his replacement Mikhail Fradkov. The institute says he served as the director of Russia's foreign intelligence service from 2007 to 2016. [http://bit.ly/2os4tvz]

Reuters was unable to determine if either man was directly involved in the drafting of the documents. Reshetnikov's office referred questions to the Russian institute.

On its website, the Russian institute describes itself as providing "expert appraisals," "recommendations," and "analytical materials" to the Russian president's office, cabinet, National Security Council, ministries and parliament. [http://bit.ly/2pCBGpR]

"We did our best for nearly eight years to implement your foreign policy concept," Reshetnikov told Putin. "The policy of Russia and the policy of the President of Russia have been the cornerstone of our operation."

More from AOL.com:
Russia vetoes UN resolution on Syria attack, China abstains
US drops 'mother of all bombs' in Afghanistan: Pentagon
Report: US 'prepared to launch a preemptive strike' on North Korea