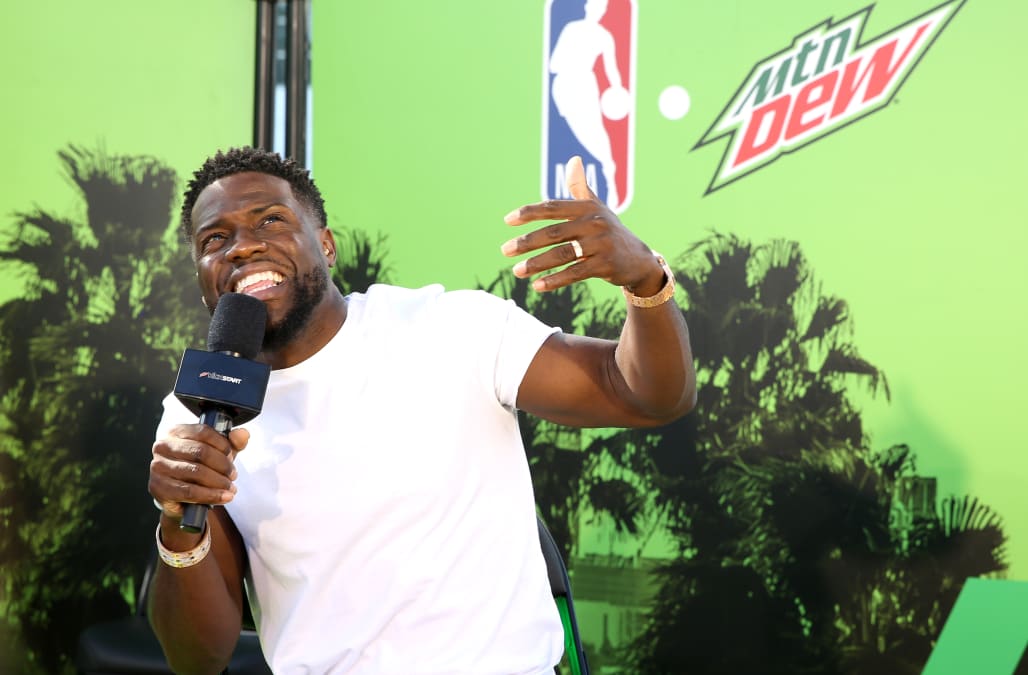 When it comes to professional sports, there’s nothing quite like the electricity that accompanies playoff season — especially for the NBA.

But the vast popularity of these games, accompanied by the sky-high prices of tickets, make scoring a seat at an NBA playoff game anything but a slam-dunk.

Celebrities at the NBA All-Star game:

Celebrities at the NBA All-Star Game

Cardi B and Offset

Snoop Dogg and Chance the Rapper

But there might be a way around that this year.

Oh, and not to mention the way around that would also include sitting alongside one of the NBA’s biggest celebrity fans. Courtside.

The company, which is notoriously known for packing in some of the biggest talent names in its promotions, is going somewhere they’ve never gone before with the contest, proving that the soda giant is still as relevant as ever as it continues to morph with new products, packages and experiences.

For Hart, the partnership and becoming the face of Mtn Dew Kickstart seemed like natural, seamless decision:

“It’s a partnership that I think makes sense between myself and Mountain Dew Kickstart … the campaign that we’re putting together is a fun one. We’re looking for that perfect CourtSidekick, you know that person that can know and understand the do's and don’ts of sitting courtside and have the etiquette of a CourtSidekick  — it’s just something that hasn’t been done.

I think in anything that you do, any partnership, you always want to look for ways to be unique, but at the same time get your name to your cause — the relationship between myself and Mountain Dew Kickstart just made sense [to me].”

Hart’s love of the game is virtually unparalleled by anyone else in Hollywood, and for good reason:

“My love and passion for basketball comes from not making it to the NBA. There was a point in my life where you couldn’t tell me I wasn’t going to the NBA … but as you get older and you see a tape of yourself playing basketball and realize you weren’t as good as you thought you were and you say ’You know what, I just need to support the game from afar … you become the ultimate fan. I can honestly say that I’ve been a fan of the NBA, of basketball, since I was a kid — it’s the game that I love, the game that I love to watch. If you have that passion for it, you really, really can understand it, you can enjoy it at a very, very high level.”

Hart is giving fans until March 19 to submit their applications (by grabbing a can of Mountain Dew Kickstart and telling Kevin why they think they’re courtside ready by using the hashtag #CourtSidekickContest on Facebook, Instagram or Twitter) before he selects five finalists on March 26.

So what’s it going to take to get into his top five?

“It’s a list of [qualities] — you can’t just have one quality for that person that you’re looking for to sit courtside with you. You just need to understand that it’s a vibe — from the way that you embrace the game of basketball … to your level of ‘sane’ … where do you fit and what do you understand?

I’m the guy that’s all over the place when I’m courtside … I’ve been anywhere from the aggressive guy to the calm guy to the emotional guy. I’ve been on all sides of sitting courtside watching the game.”

Mountain Dew fans will then get to vote online until April 4 for their favorite finalist.

Watch Kevin share some of his top courtside do's and don'ts:

Also a requirement? Putting up with Hart’s ride or die fan mentality:

“Understand that you are talking to a Philadelphian … we’re a little crazy when it comes to support and loyalty. We go above the bar … we’re the kind of fans that eat horse manure, and I apologize for that … sliding down poles … I think it’s fair to say I’m exactly what they are, I’m the same guy … yelling at the TV, basketball fan calling out the plays that you think you should be called, yeah, I’m that guy.”

Hart, rightfully so, is pumped for the playoffs, which only grew to new heights after watching (and introducing) the NBA All-Star game on February 18.

“It’s really just watching a lot of guys that admire me and my talent. That’s tough, you know, I know when I’m sitting there and the game is being played a lot of guys are like ‘Man, we wish Kev was out here!’

It’s a bittersweet thing, just to understand that I chose comedy, basketball chose me — I had to go the route of making the world a better place with laughter.”

Safe to say that we couldn't imagine a world full of laughter without Kevin behind a whole lot of it.

For more info on the contest, visit here.