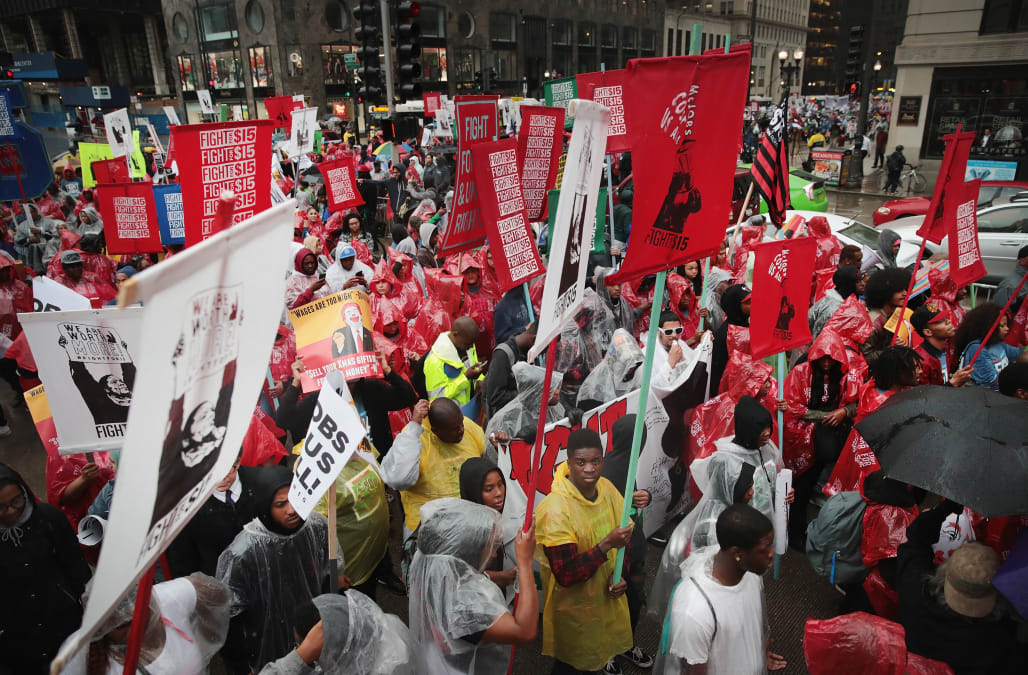 Thousands of protesters marched through the streets of Chicago on Tuesday evening to fight for a living wage and protest President Donald Trump in the March on McDonald's.

The Women's March, the Movement for Black Lives and other organizations joined Fight for $15 in marching through downtown Chicago, past Trump Tower, to the Rock N Roll McDonald's — the city's flagship establishment. They chanted in support of a living wage and carried signs bearing an image of Trump in Ronald McDonald makeup.

"We're trying to show that McDonald's is the Donald Trump of employers," Jorel Ware, a McDonald's employee from New York, said at the march. "The poverty wages they're paying is ridiculous."

The protest was held to coincide with the McDonald's shareholder meeting, which is scheduled for Wednesday at the company's headquarters in suburban Oak Brook, Illinois.

Low-wage workers and their supporters came from across the country to protest the corporation and push for a higher wage and union rights — and to challenge Trump, whom protesters say has negatively impacted workers, immigrants, women and people of color.

Adom Getachew, convener of the Resist, Reimagine, Rebuild coalition, said in an interview that the fight for racial justice and the fight for labor fairness must work together.

"Our view has been that it's only when we fight together that we can challenge those in power," Getachew said. "Trump is an extreme version of what we've already been experiencing."

Organizers said they anticipated 10,000 participants. A final crowd estimate was not immediately available from organizers or Chicago police, but the march appeared to have a large turnout, despite often heavy rains.

Vernise Taylor, a personal assistant from Chicago, ducked out of the rain into a bus stop just past Trump Tower — to check on a patient of hers.

She said that under President Barack Obama, her wage increased to $13 an hour. But the time before, when she made just $10 an hour, remains fresh in her mind — and she came out to fight because people deserve more.

"We're trying to build up something of our own," Taylor said.

Then, she put her poncho back on and headed back out into the driving rain to march.

The protest will continue on Wednesday morning outside the company's headquarters.

More on AOL.com:
McDonald's former CEO is abandoning burgers and betting on a pizza chain that's like 'Subway, but better'
The US may (finally) get paid parental leave under Trump's new proposal
Twitter co-founder says he's 'sorry' for the company's perceived role in electing Trump