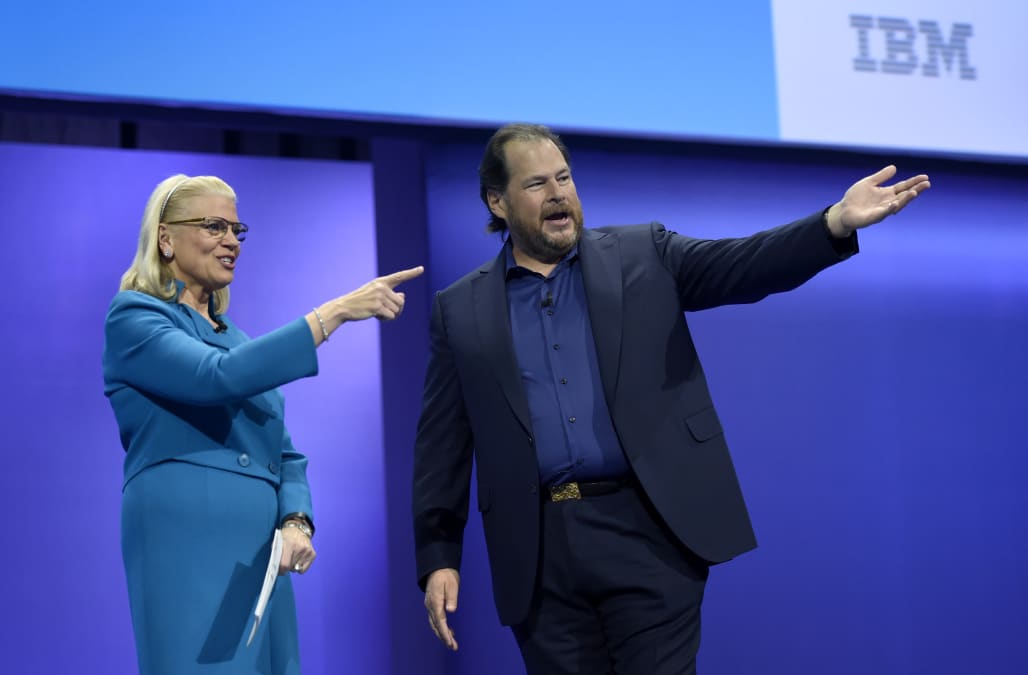 When IBM's CEO, Ginni Rometty, wrote a glowing letter to President Donald Trump after his inauguration, it landed poorly, to say the least.

Many used the opportunity to remind the public that IBM collaborated with the Nazis throughout World War II. One senior content strategist quit, writing an open letter about Rometty's "tacit endorsement" of Trump's platform.

SEE ALSO: There's been a 'stunning' shift in the US economy since Trump's election

Now, IBM employees are drawing a line in the sand. In New York City on Tuesday, IBM employees showed up at the IBM Watson Center to deliver a petition demanding the company acknowledge the diversity of its staff and not work to further the more xenophobic aspects of Trump's agenda.

"Our executive's hollow, corporate statements don't reflect our values. It's the workers that bring these values to life," IBM engineer Daniel Hanley, who began organizing IBM workers shortly after inauguration, said by phone on Tuesday.

"Our executive's hollow, corporate statements don't reflect our values. It's the workers that bring these values to life."

The letter has five demands: To allow IBM employees to recuse themselves from unconstitutional work, to increase diversity programs, to avoid using Trump-owned assets throughout the business, to shore up severance pay policies and to increase the company's contributions to employees' retirement funds.

"We need a clear statement that in the current political context, IBM is willing to commit to these concrete terms," Hanley said.

The action in New York City was the second this week. On Monday, IBM employees held a similar event for workers in Atlanta. The effort to push back against their CEO's sentiment introduced many IBM employees to activism and organizing for the first time.

"It's something we just don't talk about — our values and practices," Sesha Baratham, an IBM consulting services worker based in Boston, said by phone. "It's like finding a real moral, social consciousness in IBM."

And for that, Baratham said, it takes solidarity between workers demanding change from within.

AutoZone's stock took a hit after Trump's election, which was perceived to be a reaction to Trump's rhetoric over trade with Mexico. The US auto industry imports $80 billion worth of cars and parts from Mexico annually.

After the meeting with the president, Rhodes said in a statement, "the president understands we support pro-growth policies that we believe will lead to greater domestic investment."

In January, Cornell traveled to Washington, DC to meet with members of the House Ways and Means Committee.

"He told them an import tax could impact consumers' ability to buy essential goods, such as baby supplies that are made overseas and imported to the United States, according to a person familiar with the talks," Reuters reported.

Reuters reported in January that Best Buy was circulating a flyer throughout Capitol Hill that cited "an analyst forecast that a 20 percent tax would wipe out the company's projected annual net income of $1 billion and turn it into a $2 billion loss" and that "foreign internet sellers like China's Alibaba.com would be able to avoid the tax by making sales online and shipping to U.S. consumers directly, 'undercutting U.S. businesses.'"

Peck has not publicly commented on the implications of a border tax but was one of the signatories of a public letter to Trump following his the November US presidential election that called for him to uphold President Barack Obama's climate change regulations.

The Walgreens Boots Alliance and Rite Aid agreed to a merger late last year, but they did not get the deal approved before Trump took office. They are awaiting the merger to go through in July, pending approval by the Federal Trade Commission.

In a climate where retail stores have been severely struggling, J.C. Penney is no different, though Morgan Stanley analysts bumped up the company's stock rating from "Underweight" to "Equal Weight" on February 13.

Jo-Ann Stores is America's largest fabric and crafts retailer, with about 800 locations across 49 states.

In early 2016, Sandfort said Trump seemed like a "Pandora's box," the Nashville Business Journal reported and noted that he was wary of a Democratic president increasing regulation and portraying the business world in a negative light.

Tractor Supply Company is a Tennessee-based retail chain focused on home improvement products, with $6 billion in sales and locations in 49 states.