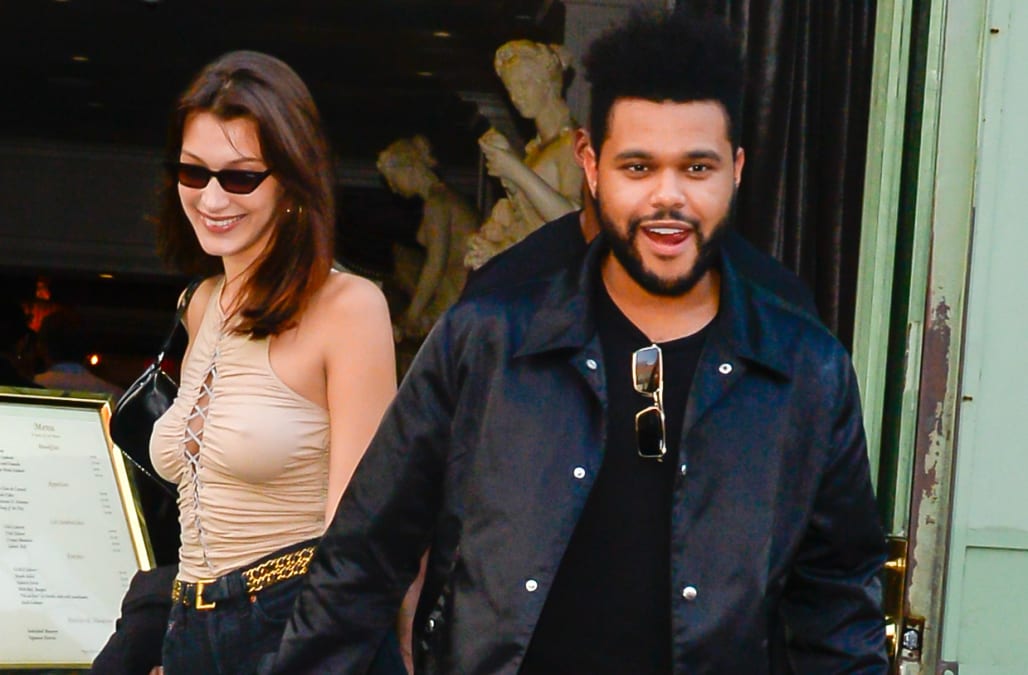 The model celebrated her 22nd birthday in New York City on Tuesday surrounded by her loved ones like boyfriend The Weeknd, siblings Gigi and Anwar and pals like Kendall Jenner. Other stars that were spotted out and about in the Big Apple this week included Kris Jenner, Priyanka Chopra and Kim Kardashian.

Over on the West Coast, Nick Jonas grabbed dinner with brother Joe Jonas, Jennifer Garner looked better than ever promoting "Camping" and Jenna Dewan was all smiles at the airport amid news that ex Channing Tatum is dating singer Jessie J.

Bella Hadid and The Weeknd were spotted leaving Sadelle's, where the reunited couple celebrated Bella's birthday over breakfast, in NYC on Tuesday morning.

Bella Hadid and boyfriend The Weeknd shared a birthday smooch on Tuesday in NYC.

Kim Kardashian was white-hot in a skin-baring Rick Owens dress at a Tiffany & Co. party in NYC on Tuesday night.

Jenna Dewan was all smiles after touching down at LAX on Wednesday amid news that ex Channing Tatum has a new girlfriend.

Timothee Chalamet and Steve Carell attended the premiere of their film, "Beautiful Boy," presented by Audi, at the Samuel Goldwyn Theater on Monday in Beverly Hills.

Kris Jenner rocked some head-turning green leather pants and a quarter-zip top while leaving her hotel in New York City on Wednesday.

Chrissy Teigen brought along her daughter, Luna, to enjoy the Incredible Egg's lounge at Cravings Fest, where guests got to taste recipes from her new second cookbook. How cute are those yolk pillows?!

Drew Taggart of The Chainsmokers and Shawn Mendes attended Post Malone's official 2018 AMAs after party hosted by John Terzian and Dre London at Harriet's at the upcoming 1 Hotel West Hollywood on Tuesday night.

Kendall Jenner kept it casual for a movie outing with friends at iPic Theater in downtown New York City on Wednesday.

Owen Wilson, who recently became a dad for the third time, was photographed walking out of LAX on Tuesday.

Food Network personality Katie Lee got her hands on a CAULIPOWER pizza at the 2018 New York City Wine & Food Festival on Thursday.

Christina Milian and DJ Chantel Jeffries hung out at NYLON's Annual It Girl Party sponsored By Call It Spring on Thursday night at the Ace Hotel Downtown in Los Angeles.

"Top Chef" host Padma Lakshmi rocked a sexy silver dress at an even in New York City on Wednesday.

Priyanka Chopra rocked red for an appearance in New York City on Tuesday.

(Photo by John Parra/Getty Images for We The Best)

"Riverdale" star Lili Reinhart was all smiles while walking into the Build Series studio in NYC on Tuesday.

Former "Bachelor" stars Arie Luyendyk and Lauren Burnham stepped out on Monday night for The Knot Gala 2018 at the New York Public Library.

Kris Jenner went for a signature all-black ensemble for an event in New York City on Tuesday evening.

Jessie James Decker was spotted out and about in West Hollywood on Monday to promote her new boot campaign with JustFab.

Kendall Jenner, rocking an oversized mustard cardigan, shielded her face from paparazzi while out in L.A. on Tuesday night.

Kendra Wilkinson brought her kids to the Nights of the Jack Halloween launch party at the King Gillette Ranch on Wednesday in Calabasas, California.

Naomi Watts showed she could rock florals for fall at an event in NYC on Wednesday.

San Francisco guests at Room To Read 2018 International Day Of The Girl Benefit got to hear words of wisdom from Lily Singh.

Thandie Newton was spotted leaving Build Series in NYC on Tuesday in a gorgeous patterned dress.

Charli XCX was photographed leaving BBC Radio One on Thursday in London.

Rande Gerber and his model son, Presley Gerber, were spotted stepping out for dinner in Los Angeles on Wednesday night.

Camila Cabello hilariously posed for the paparazzi while arriving at LAX airport on Wednesday.

Cara Delevingne stepped out in all black for her Burberry fragrance launch event in London on Wednesday night.

Justin Timberlake was photographed backstage at the United Center in Chicago with Bai Antioxidant Water.

Lucy Hale grabbed some healthy treats from Kreation on Wednesday in Los Angeles.