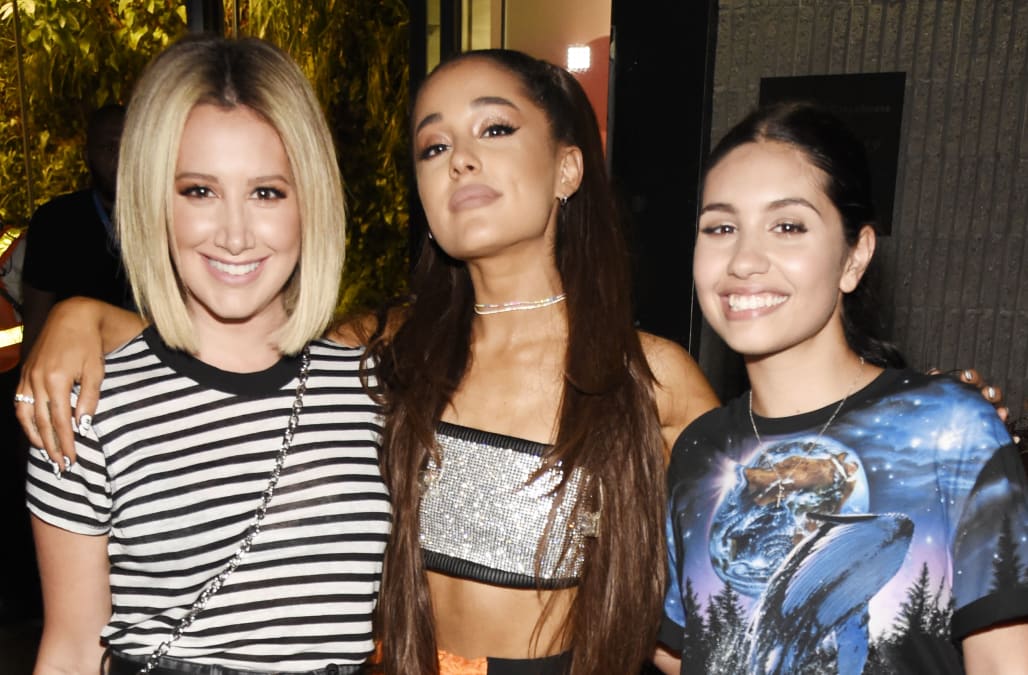 Ariana Grande and Lady Gaga gave fans what they wanted in New York City this week.

Grande hit the stage at Amazon Music's Unboxing Prime Day concert on Wednesday night for some of her biggest super fans -- and hung out with Alessia Cara and Ashley Tisdale backstage! -- while Lady Gaga continued her streak of rocking head-turning styles while recording highly-anticipated new music in NYC.

Also this week, Drake, Justin Timberlake, Jessica Biel and Pippa Middleton all hit the All-England Club for Wimbledon, where they watched the likes of Serena Williams and Roger Federer play on Centre Court.

Justin Bieber and Hailey Baldwin were spotted heading to dinner in Dumbo, Brooklyn on Thursday.

Drake was in the stands watching pal Serena Williams play at Wimbledon this week.

Jonah Hills flashed a sly smile while walking around New York City with a giant water bottle on Wednesday.

Bethenny Frankel stepped out for the launch party of Bulletproof's first-ever pop-up experience in New York City on Wednesday night.

Dwayne "The Rock" Johnson rocked a black-and-white Hawaiian shirt while making the rounds in New York City on Wednesday.

Justin Timberlake and Jessica Biel attended Drake's party at Annabel's on in London on Tuesday night.

Emma Roberts sported a sheer black dress while out and about in Los Angeles on Wednesday.

Gigi Hadid was feelin' the blues as she left her apartment in New York City on Tuesday.

Pippa Middleton returned to Wimbledon for a second time this year on Wednesday in a blue dress that showed off her baby bump.

Anna Wintour was all smiles as she arrived at Wimbledon for the men's semi-finals on Friday.

Priyanka Chopra hosted a dinner at Wölffer Estate Vineyards with Saks Fifth Avenue and Vogue in celebration of summer on Thursday evening.

Actor Tristan Wilds attended The Official After Party of Essence Fest, sponsored by Crown Royal, on Sunday in New Orleans.

Iggy Azalea showed off her signature curves while out doing some promo on Tuesday in Los Angeles.

Darren Criss performed at Krug Encounters Aspen on Thursday night, where he sang songs like "Let It Be" and "Free Falling."

Liev Schreiber was seen out and about in NoHo rocking a groutfit (grey outfit) on Tuesday.

Lady Gaga was swarmed by fans when she left Milk Studios on Wednesday night in New York City.

Liv Tyler stunned in all black while entering "The Late Show With Stephen Colbert" at the Ed Sullivan Theater on Thursday in NYC.

Melanie Griffith proved she wasn't afraid of color while out and about in Los Angeles on Wednesday.

Kristin Chenoweth and her dog, Thunder, were spotted at LAX on Thursday.

Bethenny Frankel was all smiles while out and about in New York City on Tuesday.

Christine Baranski was spotted at the Magic Radio studios to promote "Mamma Mia! Here We Go Again" in London on Tuesday.

Kelsea Ballerini flashed a smile while getting into her car in New York City after performing at the Amazon Music Unboxing Prime Day event on Wednesday night.

Tinashe was spotted out and about in Los Angeles on Thursday night.

Jessica Biel sported a ton of layers while out in London on Wednesday night.

Katie Couric looked stoic while out for a while in New York City on Tuesday.

Nicky Hilton Rothschild stepped out for the launch of The Tot Pop Up store with Everafter in East Hampton over the weekend.

Riverdale's  Marisol Nichols spotted out and about enjoying a coffee on June 13 wearing a maxi dress by dressbarn.