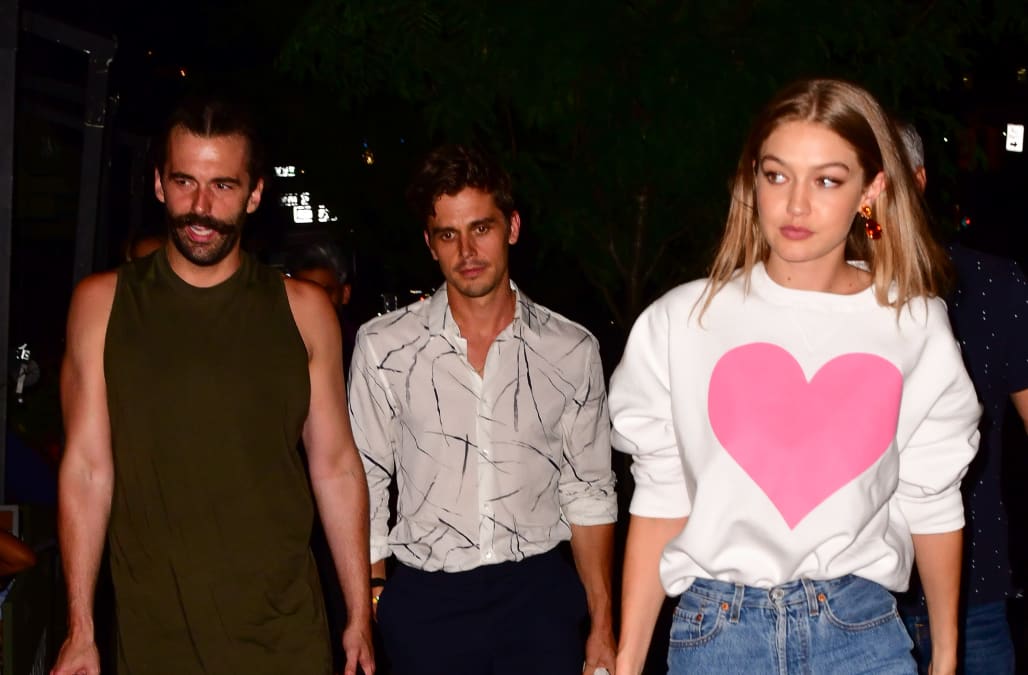 The supermodel attended two events in a row this week with Antoni, Jonathan and Co. in New York City this week, months after the rising stars attended her 23rd birthday party in April.

Also in NYC this week was Victoria Beckham, who rocked several high-fashion street style looks that stopped gawking fans in their tracks.

Paris Hilton made several notable outings in Los Angeles this week, including when she rocked a sweatshirt that said "I'm Bored" on it as she held her dog in her arms. Also in L.A.? "Bachelor in Paradise" stars Ashley Iaconetti and Jared Haibon, who continued to flaunt their newfound romance; Miley Cyrus, who stepped out to grab a green juice rocking her iconic #MileyBun; and Ariel Winter, who was seen out and about with boyfriend Levi Meaden after dispelling engagement rumors.

See all of the best celebrity sightings of the week below:

Blac Chyna and Amber Rose had a girls' night out in Los Angeles on Wednesday night.

Gigi Hadid dined at Cookshop with some of the stars of "Queer Eye" on Tuesday night in New York City.

Chrissy Teigen and John Legend posed with daughter Luna at the launch of Legend's new rosé wine brand, LVE, during an intimate Airbnb Concert on Thursday night in Beverly Hills.

Victoria Beckham was pretty in pink while stepping out in New York City on Tuesday.

Ariana Grande licked a lollipop while stepping out with her fiancé, Pete Davidson, on Wednesday in New York City.

Singer Dua Lipa put on a daring display in a sun dress during an event in SoHo on Wednesday.

Miley Cyrus was spotted grabbing a juice in Los Angeles on Wednesday.

Paris Hilton rocked an "I'm Bored" sweatshirt while out and about with her chihuahua, Diamond Baby, on Wednesday in Los Angeles.

Ariel Winter and her boyfriend, Levi Meaden, were spotted out and about in Los Angeles on Wednesday.

Bella Hadid rocked ripped jeans to a Valentino party in Paris on Wednesday.

Olivia Wilde flashed a smile for paparazzi during an event in Los Angeles on Wednesday.

"Bachelor in Paradise" stars Ashley Iaconetti and Jared Haibon continued to flaunt their romance at an event in Los Angeles on Wednesday night.

Evangeline Lilly left little to imagination in a see-through jumpsuit for her appearance on "Jimmy Kimmel Live!" on Wednesday.

Alex Pall and Andrew Taggart of The Chainsmokers performed an exclusive live show for American Airlines AAdvantage Mastercard cardmembers at The Fillmore Philadelphia on Wednesday in Philadelphia.

Russell Wilson and Ciara attended The Victoria and Albert Museum Summer Party on Wednesday in London.

Michael Douglas was seen out and about with his son on Wednesday in Los Angeles.

Gigi Hadid stepped out in a summery look in New York City on Wednesday.

Antoni Porowski of Netflix's "Queer Eye" hosted The Art of the Mix event with Cointreau in New York City.

Bella Hadid was spotted out and about in Paris on Wednesday.

Victoria Beckham opted for jeans and a camo top while making the rounds in NYC on Tuesday evening.

Paris Hilton stepped out in Los Angeles with her dog on Tuesday.

Christina Aguilera rocked all black for an outing in NEW on Tuesday night.

"Orange Is the New Black" actress Lea DeLaria celebrated Pride month with an epic night of comedy at Samsung 837 in partnership with Pride Place and Ketel One Family-Made Vodka on Wednesday in NYC.

Claire Danes was spotted walking in SoHo on Tuesday.

Gigi Hadid strutted her stuff while entering her NoHo apartment on Tuesday.

Over in Brooklyn, JCPenney Big & Tall Style Ambassador Shaquille O'Neal surprised deserving young men from the Y with a day of mentorship.

Cher was spotted leaving her London hotel on Tuesday before a taping of "The Late Late Show With James Corden."