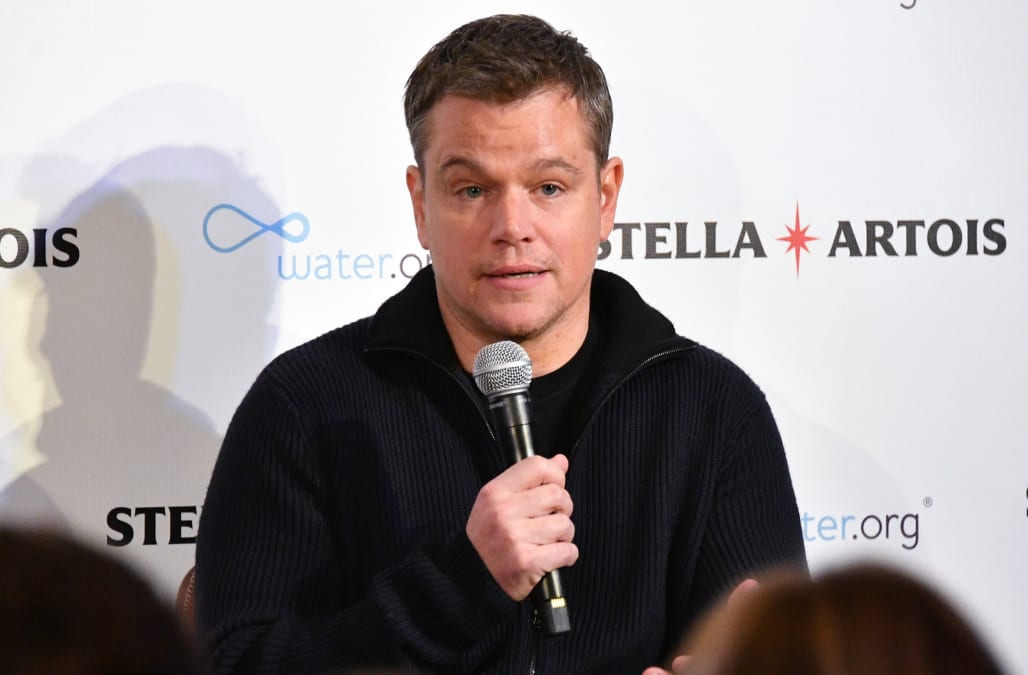 Matt Damon and his Water.org co-founder Gary White want to "interrupt" your Super Bowl experience this year -- kind of.

The two partners, who founded the non-profit organization back in 2009, have given over 9 million people across the developing world access to clean water since teaming up, and they're hoping to use Stella Artois' first Super Bowl commercial since 2011 to add another million to that number.

Anyone who buys Stella Artois to watch the biggest television broadcast in the world -- in the form of a 12-pack, a pint or a bottle at a bar or one of the brand's Limited-Edition Chalices -- will help bring access to clean water to someone in a developing country for a full year. In other words, they're encouraging people around the country to make their Super Bowl party "matter," simply by choosing to buy Stella Artois.

AOL Entertainment recently sat down with Gary White and Matt Damon to talk about the potential impact that this massive new platform and their continuing desire to make a positive change.

27 PHOTOS
Matt Damon out and about
See Gallery

Check out some of my conversation with Matt Damon and Gary White below:

This new Super Bowl campaign is bringing your mission to a whole new, massive scale. As you earlier, Matt, if just one percent of the 100 million who watch the Super Bowl participate, 1 million people could be helped by this.

Matt Damon: It’s just awesome. That’s why this partnership is more than we could ever hope for, because they really are using their massive reach to activate their consumers. From our conversations with them [we learned that] this matters to their consumers. It's good for all of us that this millennial consumer really thinks about these types of things. For me, it’s a no-brainer: If I were going to a Super Bowl party and bringing beer, than of course I’ll bring a 12-pack of Stella. Make it matter.

And Americans are so protective of their football traditions and the way they choose to watch games -- especially the Super Bowl -- but this doesn't impact that experience too much.

Gary White: Yeah, exactly. People are already in this cultural moment, and they all have traditions, and this complements that -- but it also interrupts it a bit. When they see the commercial and they understand the benefit they have in turning that tap and having water come out and then seeing how it is for hundreds of millions of other people, they recognize a little bit more what a miracle it is to have clean water. But it doesn’t stop there. It’s like, "This is how you can make a difference." It’s a low barrier to entry for them.

When people see this Super Bowl commercial, how do you hope they react to it? Do you hope they take action right away, or is it more of a mental awareness you hope for?

Damon: The great thing is that in just 30 seconds, Stella is making them aware of the problem and giving them the tools to participate in the solution. This offer extends through the middle of April, so even after the Super Bowl if you go out and buy a 12-pack of Stella, you are changing somebody’s life in the developing world. Somebody you will never meet will be affected completely -- positively -- because a decision you’ve made as a consumer.

Gary, in your words, how important and impactful has it been to have Matt -- someone who is a respected household name around the world -- as a partner in this?

White: It’s a game-changer. Since we brought our two organizations together almost 10 years ago, it’s just continued to build. It’s easy for a charity to get a spokesperson -- someone will show up, do a photo-op and maybe give a speech -- but you just don’t see many celebrities -- you can probably count them, [George] Clooney being one, on one hand -- that invest themselves so much into an issue and into understanding the intricacies of that issue and then innovating along with us, as Matt has done. It speaks to his level of commitment, and it’s not just a one-off.

More from AOL.com:
Josh Duhamel and Jimmi Simpson on tackling the 'Unsolved' murders of Tupac Shakur and Biggie Smalls on screen
New 'Summer House' stars on what to expect from season 2: 'Definitely a little lust, maybe a little love'
Rita Ora drops another new track: 'I just wanted to feel like a rapper for a second'