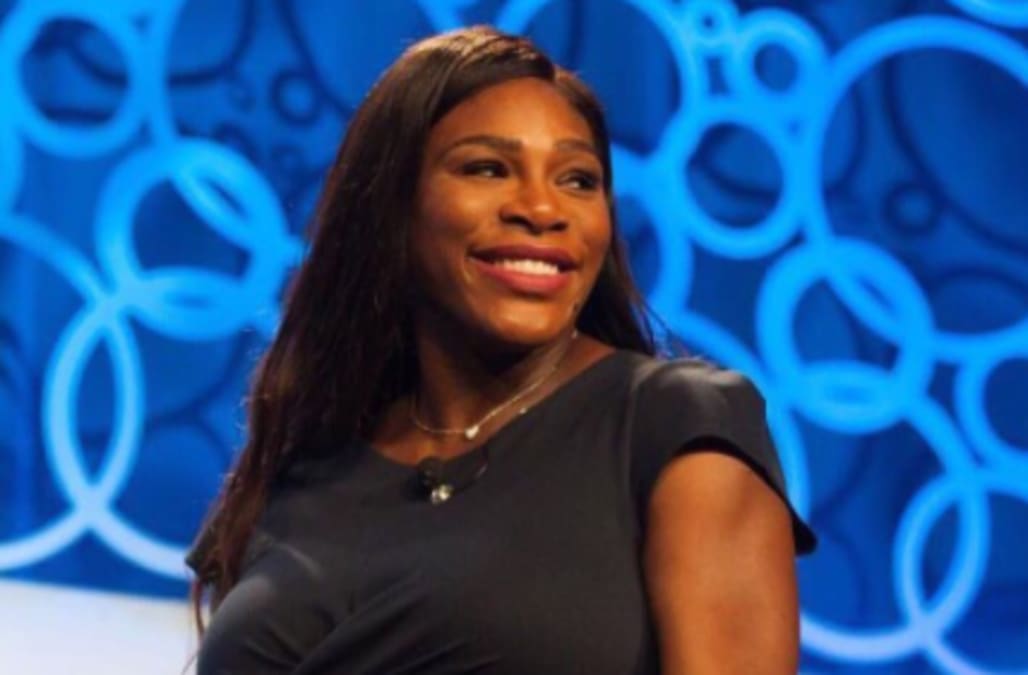 Is Serena Williams planning on finding out the sex of her baby before she gives birth?

The tennis star and fashion designer took to social media on Monday to reveal that no, she isn't going to know her baby's gender in advance. She's going to wait.

SEE ALSO: Serena Williams says she's been playing tennis 'once a week at minimum' during her pregnancy

"So few surprises in life these days, that's why I'm waiting to find out the sex of the baby," she captioned a recent photo of herself. "@SurveyMonkeyrevealed your guesses!"

The reveal comes after month of speculation about whether or not Williams, who serves on the board of Survey Monkey, plans on revealing her baby's gender ahead of time. The comments on her Monday afternoon post reveal that Serena's fans are pretty much equally divided on whether they think she's expecting a boy or a girl.

The 23-time grand slam winner spoke to AOL Entertainment earlier this month about her pregnancy, and revealed that she's taking her time on putting the baby's nursery together.

"[I'm] working on the nursery ever-so-slowly [because] I don't want to get it done and not have anything else to do," she told us of the project. "Each week, I have small goals. That's how I've been spending my time."

But that's not all she's been doing: Williams, who famously told Vanity Fair that she wants to return to the WTA tour as early as January, has also been making sure to stay fit during her pregnancy, and she's been playing tennis "once a week -- at minimum."

"Some days I'll do a long walk and most days I do pool workouts, which are fun and new for me, because I never really do that," she told AOL Entertainment of her pregnancy fitness routine. "It's been really fun and totally different! I try to play tennis once a week -- at minimum -- and sometimes I try to make it out twice a week. I don't do too much. No running or anything like that; I just kind of relax and have fun and work on my stroke. I'll tell my hitter that I don't want to lose my touch, and he just laughs at me."

For more from our interview with Serena Williams, watch the video above.

Serena Williams through the years

Serena Williams reaches up to hit the ball during the Nancy Reagan Tennis tournament.

Serena Williams in action on the tennis court.

Serena Williams and her sister Venus Williams ride with their father Richard Williams at a tennis camp in Florida.

Sisters, Venus (L) and Serena Williams, share the same racquet as they play in the Arthur Ashe Kids Day tennis exhibition at the USTA National Tennis Center in New York August 29. Serena is competing in her first U.S. Open when competition begins August 31. Venus made it to the finals in the 1997 U.S. Open.

Serena Williams from USA at the 1998 Roland Garros French Open.

Serena Williams of the USA relaxes against a palm tree during a break from the Lipton Championships in Key Biscayne, Florida, USA.

Serena Williams of the United States in action during the Adidas International Tournament played at White City in Sydney, Australia.

American tennis player Serena Williams (left) and her sister Venus (right) with their mother Oracene, Key Biscayne, Florida, 28th March 1999. The sisters have just played each other in the final of the Lipton International Players Championships (now the Sony Ericsson Open), with Venus defeating Serena to win the tournament. This was the first time that two sisters had competed against each other in a final.

Sports Illustratated Sportsman of the Year 2000 award at the Beacon Theater in New York, United States on December 14, 2000 - Venus and Serena Williams.

Tennis star Serena Williams arrives at The Theater at Madison Square Garden for the Essence Awards 2001.

Serena Williams of the USA shows a smile in her match with Jennifer Capriati of the USA in the womens singles during the semi finals of the French Open at Roland Garros in Paris on June 6, 2002.

US Serena Williams, who won the Roland-Garros Tennis Open in 2002, gives a press conference, 25 May 2003 in Paris, one day ahead of the beginning of the French Tennis Open.

Serena Williams of the USA and Lleyton Hewitt of Australia with their 2002 world number one awards during the ITF World Champions dinner on June 2, 2003 at the Pavillon d'Armenonville in Paris, France.

Serena Williams of the USA announces her withdrawal from the State Farm Women's Tennis Classic because of a knee injury February 27, 2003, in Scottsdale, Arizona.

Serena Williams signs autographs after playing her sister Venus on the Williams Sisters Tour on December 2, 2004 at Philips Arena in Atlanta, Georgia.

Serena Williams and Usher during VH1 Big in '04 - Backstage and Audience at Shrine Auditorium in Los Angeles, California, United States.

Serena Williams of USA attends a signing session held at the HP store on November 12, 2008 in Sandton, Johannesburg, South Africa.

Gold medallists Serena (R) and Venus Williams of the U.S. celebrate on the podium after the women's doubles tennis competition at the Beijing 2008 Olympic Games.

Serena Williams of the U.S. poses for photographers as she holds the winners trophy after defeating Russia's Vera Zvonareva in the womens' singles final at the 2010 Wimbledon tennis championships in London, July 3, 2010.

Tennis star Serena Williams watches a game between the Miami Heat and the Charlotte Bobcats at American Airlines Arena on November 19, 2010 in Miami, Florida.

Serena Williams of United States talks to media during a visit to the Wheel of Brisbane in South Bank on day two of the Brisbane International on December 31, 2012 in Brisbane, Australia.

Pictured: Serena Williams during an interview with host Jimmy Fallon on September 10, 2012

Serena Williams of the United States poses for photographers with the Billy Jean King Trophy after defeating Maria Sharapova of Russia during the final of the TEB BNP Paribas WTA Championships at the Sinan Erdem Dome October 28, 2012 in Istanbul, Turkey.

Serena Williams of the US reacts during a WTA Championships final tennis match against China's Li Na on October 27, 2013 in Istanbul.

Tennis players Serena Williams of the US (R) and Victoria Azarenka of Belarus (L) pose during a media opportunity in the Thai seaside resort town of Hua Hin on December 27, 2013 a day before the two women play in an exhibition tennis match.

US tennis player Serena Williams poses with the Suzanne Lenglen trophy near the Eiffel Tower in Paris on June 8, 2013, after winning the Roland Garros French Tennis Open. Serena Williams won her second French Open title 11 years after her first triumph, defeating title-holder Maria Sharapova 6-4, 6-4 in a brief, but high-quality final. It was the 31-year-old American's 16th Grand Slam title win, taking her to within two of Chris Evert and Martina Navratilova who are tied for fourth on the all-time list.

Serena Williams of the US holds the trophy as she celebrates after victory in her women's singles final match against Russia's Maria Sharapova on day thirteen of the 2015 Australian Open tennis tournament in Melbourne on January 31, 2015.

Serena Williams of the U.S. reacts during her women's singles match against Roberta Vinci of Italy at the French Open tennis tournament at the Roland Garros stadium in Paris June 2, 2013. World number one Serena Williams reached the quarter-finals of the French Open for the first time since 2010 with an easy 6-1 6-3 win over top-ranked doubles player Roberta Vinci on Sunday.

Serena Williams of the United States holds the Daphne Akhurst Memorial Cup after winning the women's final match against Maria Sharapova of Russia during day 13 of the 2015 Australian Open at Melbourne Park on January 31, 2015 in Melbourne, Australia.

Serena Williams of the United States and Maria Sharapova of Russia shake hands after Williams won their women's final during day 13 of the 2015 Australian Open at Melbourne Park on January 31, 2015 in Melbourne, Australia.

Serena Williams of the United States plays a forehand in the women's singles match against Agnieszka Radwanska of Poland during day seven of the 2015 Hopman Cup at Perth Arena on January 10, 2015 in Perth, Australia.

(Photo by Will Russell/Getty Images)

Serena Williams is sighting on December 12, 2014 in Miami, Florida.

Serena Williams is seen on the Ultimate Run South Beach on December 14, 2014 in Miami, Florida.

Andre Agassi of the Singapore Slammers talks with team mates Daniela Hantuchova and Serena Williams during their teams match against the UAE Royals during the Coca-Cola International Premier Tennis League at the Singapore Sports Hub on December 4, 2014 in Singapore.

Serena Williams of the Singapore Slammers in action against Ana Ivanovic of the Indian Aces during the Coca-Cola International Premier Tennis League at the Singapore Sports Hub on December 3, 2014 in Singapore.

Serena Williams of the United States in action against Ana Ivanovic of Serbia in the Energi Danmark Champions Battle at Jyske Bank Boxen Arena on November 19, 2014 in Herning, Denmark.

Tennis players Caroline Wozniacki and Serena Williams attend a game between the New York Knicks and the Washington Wizards at Madison Square Garden on November 4, 2014 in New York City. The Wizards defeated the Knicks 98-83.

Serena Williams of USA celebrates with the Billie Jean King trophy after she defeats Simona Halep of Romania in the final during day seven of the BNP Paribas WTA Finals tennis at the Singapore Sports Hub on October 26, 2014 in Singapore.

Serena Williams of the United States shows her frustrations during her straight sets defeat by Simona Halep of Romania in their round robin match during the BNP Paribas WTA Finals at Singapore Sports Hub on October 22, 2014 in Singapore.

2016 U.S. Open - Day 11 Serena Williams of the United States serving against Karolina Pliskova of the Czech Republic in the Women's Singles Semifinal match on Arthur Ashe Stadium on day eleven of the 2016 US Open Tennis Tournament at the USTA Billie Jean King National Tennis Center on September 8, 2016 in Flushing, Queens, New York City.