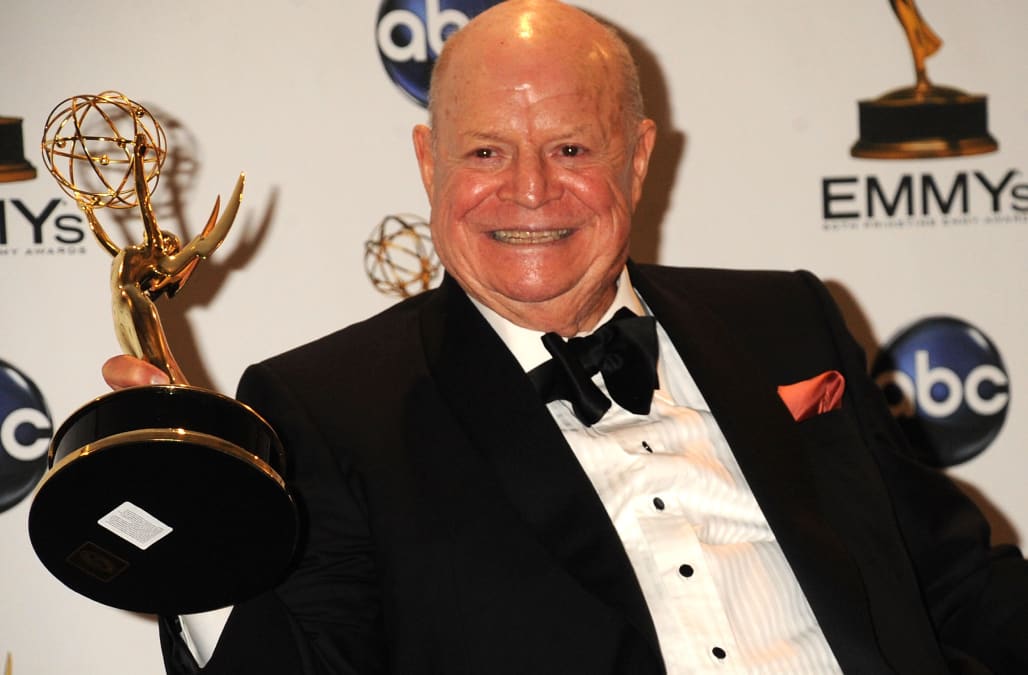 Legendary insult comedian Don Rickles died on Thursday morning at the age of 90.

The actor, who got his start on "The Tonight Show With Johnny Carson," passed away from kidney failure with his wife, Barbara, by his side.

In the wake of the heartbreaking news, celebrities took to Twitter to pay their respects to the memorable man who paved the way for many younger comics. Comedians like Jimmy Kimmel, Billy Crystal, Eric Stonestreet, Danny DeVito, Billy Eichner and Jim Carrey took to social media to honor the icon.

See how stars reacted to Don Rickles' death below:

Stars react to Don Rickles' death
90 years with Don Rickles weren't enough. One of the sweetest and most lovely people I had the pleasure of knowing. We miss you already
Don Rickles has passed away. A giant loss.
Don once begged me for a couple of bucks then told me to twist myself into a pretzel. Ego slayer! Comic Everest! Spank you, Mr Rickles. ;^)
Awwww man Rickles is dead. Rest In Peace buddy.
RIP Don Rickles. One of the funniest people that ever lived, you dumb schmuck.
Don Rickles, you kept us laughing for so many years. We will miss you dearly. Thanks for the zingers. You were one of a kind.
#RIP Don Rickles! https://t.co/xkRSabFfWX
One person I always wanted to meet and shake hands with. RIP Don Rickles
In lieu of flowers, Don Rickles' family has requested that people drop their pants and fire a rocket. #RIPDonRickles
Hockey puck. We've lost @DonRickles I love him so. Smart, funny, a pro and most important deeply and honestly kind. Kind is what matters.
Quite simply one of the funniest ever. RIP Don Rickles 90 https://t.co/xiZf1U1g6J
RIP to this sweet and lovely man https://t.co/j8mseq1aSY
Aw jeez. Rickles .Sweetest, funniest, legend and mensch. Came to a party at my house gave me a dollar and told me to get a nicer place.#RIP
RIP Don Rickles. Your humor would be lost on the young today. Say hi to Joan. https://t.co/iUx1rWMpDj
1. A Don Ricles story. My dad loved Don Rickles and always said he wanted to be subjected to a Don Rickles insult.
RIP Don Rickles... thank you for the laughs https://t.co/V4QK8rcct4
Don Rickles, king of insult comedy, dies at 90 - https://t.co/XSsKQx2d64
He never was Politically Correct and he never apologized for it. R.I.P. Don Rickles @DonRickles
My friend, my dad, the funniest biggest hearted of them all. A beautiful husband and father. My heart is broken. Rest In Peace. Don Rickles.
As Don Rickles said so many times over the years, "The senate filibuster rule is the only thing keeping me alive." :(
Don Rickles, such sharp hilarious wit in an era when an insult comic didn't need to be vulgar to be funny. You will… https://t.co/w7HSLNQslW
I saw Don Rickles at the Daily Show once. He had no idea who I was. He looked at my face & said "Stop worrying. It'… https://t.co/t0KzIlQrad
As I was standing nearby, #DonRickles once whispered in my wife's ear, "What are you doing with a loser like him?" I was honored. #rip #sad
90 years old. Didn't look a day over 214. Nice job dying, you hockey puck.
Rickles was awesome.
One of the funniest, ballsiest comics of all time. RIP Don Rickles. https://t.co/wF9rPQjjVz
God Bless Don Rickles, aka, Mr. Warmth! Proud to have been heckled by him from the stage many times! #RIP
Rickles is gone. He was the best, you hockey pucks. RIP
Don Rickles JFK/LAX we spoke for 3 hours while his beautiful wife Barbara slept. Don Rickles was so kind to me I forgot we'd never met LOVE
Don Rickles created a style of stand up and owned (!!!) it his entire career of 60+ years. It's unparalleled. No, I mean, NO ONE did that.
Up Next

More from AOL.com:
Christian Bale in talks to play Dick Cheney for director Adam McKay
Jimmy Fallon gets emotional while officially opening Universal Studios' new 'Tonight Show' ride
Kid Rock is devastated by the loss of this special woman in his life