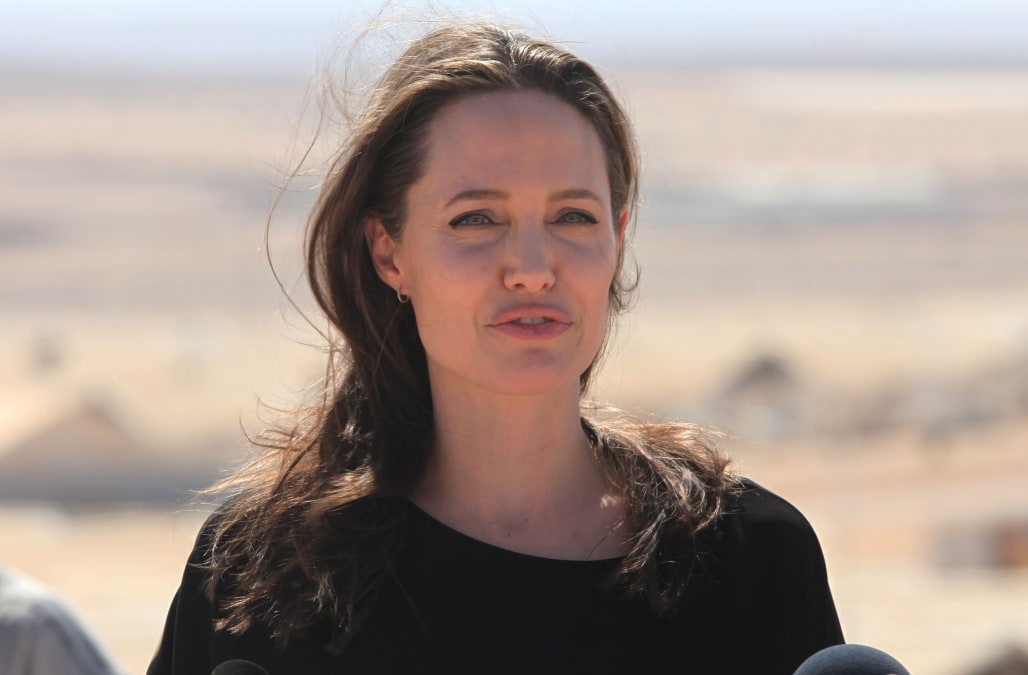 The outspoken actress, who is also a Special Envoy for the United Nations High Commission, is well-known for her advocacy of various issues, including the rights of refugees around the world. Her newly-published article, titled "Angelina Jolie: Policy Should Be Based on Facts, Not Fear," builds upon that work.

SEE ALSO: Matthew McConaughey on Donald Trump: Americans 'don't have a choice' but to embrace him

"I'm proud of our country's history of giving shelter to the most vulnerable people," she wrote. "Americans have shed blood to defend the idea that human rights transcend culture, geography, ethnicity and religion. The decision to suspend the resettlement of refugees to the United States and deny entry to citizens of seven Muslim-majority countries has been met with shock by our friends around the world precisely because of this record."

Jolie admitted that it is "justifiable" to want to protect the United States from potential terrorism, but noted that "our response must be measured and should be based on facts, not fear."

See photos of Angelina Jolie through the years:

The mother of six, who is currently embroiled in an ongoing divorce from her ex Brad Pitt, also alluded to her children, three of whom are adopted, in the piece.

"As the mother of six children, who were all born in foreign lands and are proud American citizens, I very much want our country to be safe for them, and all our nation's children," she continued. "But I also want to know that refugee children who qualify for asylum will always have a chance to plead their case to a compassionate America. And that we can manage our security without writing off citizens of entire countries -- even babies -- as unsafe to visit our country by virtue of geography or religion."

Jolie finished her New York Times op-ed by quoting the 40th president of the United States, the late Ronald Reagan: "'America is committed to the world because so much of the world is inside America,' in the words of Ronald Reagan" she wrote.

"If we divide people beyond our borders, we divide ourselves."

RELATED: 14 famous people that you didn't know were once refugees:

14 celebrities you didn't know were refugees (SELF)

During the Cold War, the actress and her family left Soviet Ukraine and came to the U.S. Mila was just seven years old at the time. After Trump signed his immigration ban, Ashton Kutcher, Mila's husband, took to Twitter to share that he's taking the ban personally. "My wife came to this country on a refugee visa in the middle of the Cold War," Kutcher tweeted. "My blood is boiling right now!"

Nobel Prize-winning physicist Albert Einstein left Germany for the U.S. in 1933 to escape the Nazi party. Upon moving to the U.S., Einstein famously said, "I shall live in a land where political freedom, tolerance, and equality of all citizens reign.”

The pop singer and her family fled Kosovo for the U.K. when Rita was just one year old.

Top model Alek Wek is a former refugee from Sudan. Civil war broke out in the African country when Wek was just nine years old, and her family left their village and traveled through the bush to get to the country's capital, according to UNHRC. "Our parents tried to shield us from the conflict but the sounds of gunfire and the vibrations of explosions filled us with dread," Wek told the UNHRC. "Dead bodies filled the landscape." When the family finally reached the capital, Wek's mother was able to send Alek and her sister to London.

The Queen frontman was born on the African island of Zanzibar, and he grew up splitting his time between Zanzibar and India. A revolution broke out on the island when the family was living there in 1964, and Mercury's family moved to London when the future rockstar was still a teen.

Supermodel Iman and her family fled Somalia in 1972 after a dangerous coup. The family moved to Kenya, where the young beauty was discovered and began her now-famous career path.

The Latin pop star was born in Havana, Cuba, but left the country with her family after Fidel Castro's Communist revolution in 1959. She was two years old when she left.

The former U.S. Secretary of State grew up in Germany, and his family fled the country for the U.S. in 1938 during the Holocaust. Kissinger was 15 years old at the time.

The classic Hollywood star began her career in Germany in the 1920s. She left the country in 1930 for Hollywood as the Nazis gained power. She became an American citizen and performed for Allied troops during World War II. Later in her life, she famously said, "America took me into her bosom when I no longer had a native country worthy of the name."

The first female U.S. Secretary of State and her family left their native Czechoslovakia twice—once to flee the Nazis during World War II, and again in 1948 during the Communist takeover. Albright spoke out against Trump's immigration ban on Facebook, writing, "As a refugee myself who fled the communist takeover of Czechoslovakia, I personally benefited from this country’s generosity and its tradition of openness. This order would end that tradition, and discriminate against those fleeing a brutal civil war in Syria."

Singer M.I.A. grew up in Sri Lanka until the age of nine, when her family fled to London to escape an ethnic civil war.

The famous psychoanalyst left Austria for London with his wife after the Nazi invasion.

The "Fidelity" singer was born in Moscow, but her family fled the Soviet Union for New York when she was nine years old in order to escape religious persecution.

The well-known sex therapist, who goes by Dr. Ruth, left Nazi Germany as a child and grew up a refugee in a Swiss orphanage.

More from AOL.com:
Jennifer Lopez runs into ex beau Casper Smart during girls night out -- see the pic!
Drew Barrymore opens up about divorce, her 'Modern Family' and the British royal she would hook up with
Celeb Spotter 003: Kim Kardashian and North West are twinning in NYC