Hilary Duff talks 'Younger,' hosting parties and why music 'is on the back burner' 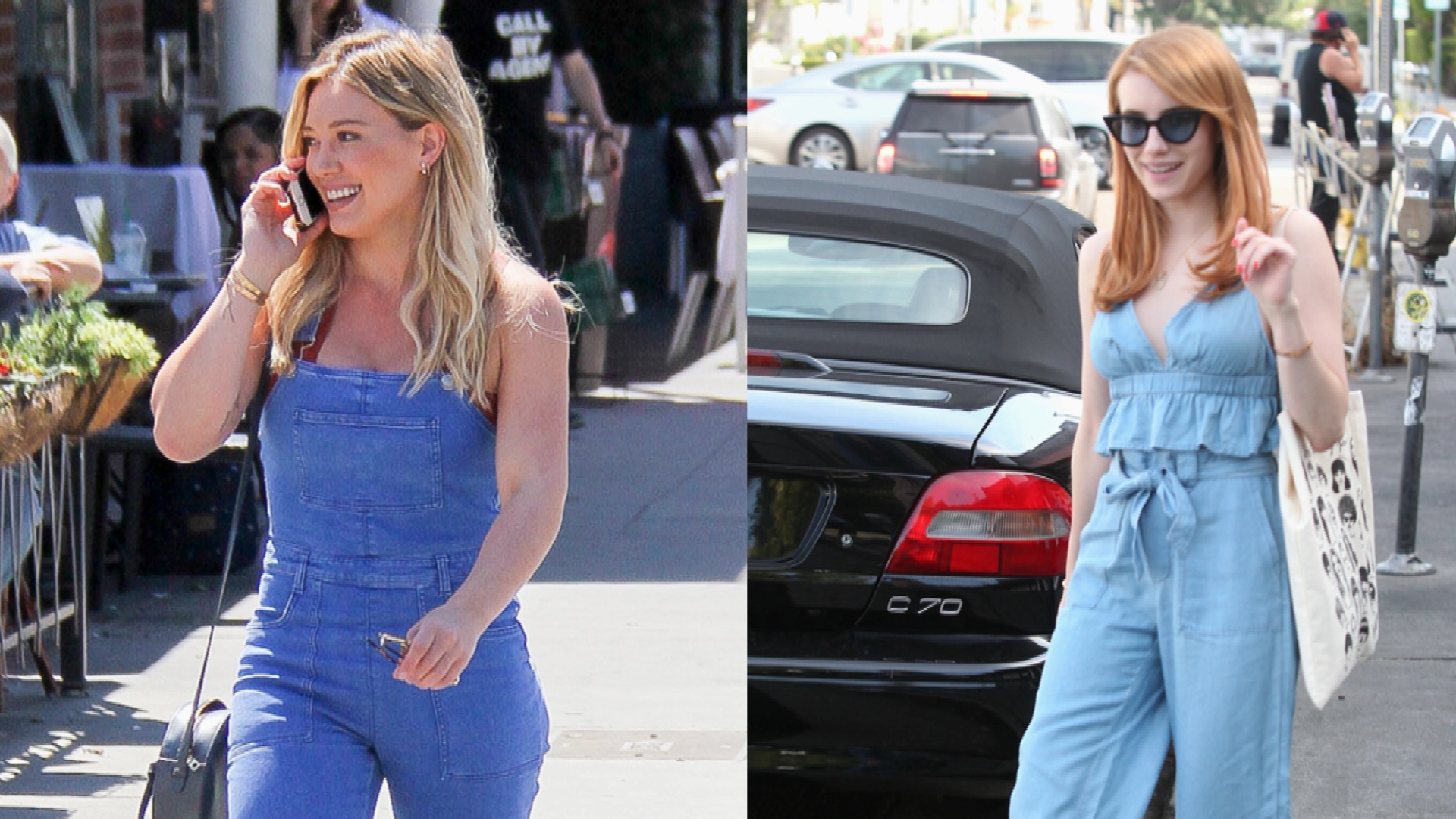 Hilary Duff is in the midst of a sort of career renaissance. Fresh off the release of her 2015 critically-acclaimed fifth studio album Breathe In. Breathe Out. -- her first album in seven years -- Duff is currently filming the third season of her hit TV Land show, "Younger," which has already gotten picked up for a fourth season. Oh yeah, and she's also a dedicated mother to her 4-year-old son, Luca.

On "Younger," which was created by "Sex and the City" creator, Darren Star, Duff plays 20-something Kelsey Peters, a character just as lovable and funny as her other defining role, Lizzie McGuire. It had been 11 years since "Lizzie McGuire" ended when "Younger" premiered in 2015, and it's not lost on Duff that she's been lucky enough to have starred in two incredibly beloved, generation-defining shows.

In addition to acting and singing, Duff also loves to host parties, which is why she's partnering with Stella Artois to "Host One to Remember" and co-curating an event in New York City that will honor the brand's legacy of timeless hosting. She describes her hosting style as casual, preferring to add nice touches rather than being full-on extravagant.

We caught up exclusively with Hilary Duff over the phone just as she began filming season three of "Younger" and talked to her about what we can expect from the series' third season, why music isn't her top priority right now (and may never will be), her partnership wit Stella Artois and how having a son has affected her lifestyle.

See photos of Hilary Duff through the years:

Check out our full conversation with Hilary Duff below:

So, I think congratulations are in order: "Younger" was just renewed for a fourth season! That's pretty unusual considering you're still filming season three. How does it feel?

It feels so exciting! We got the call yesterday on set, and the producer came up to us and was like, "Uh, Darren [Star, the creator of "Younger"] wants to talk to you on the phone." And I was thinking, "Oh no! What have I done wrong?!" But he told us we had just gotten picked up for season four. We hadn't even finished the first episode of season three, so we must be doing something right!

Season two obviously ended on a pretty intense note for your character, Kelsey, following her boyfriend, Thad's, crazy death. How can we expect that to affect her going into the third season?

As much as I loved Dan Amboyer, who plays [twins] Thad and Chad, I think it's a good thing for her. Obviously the audience is watching and asking, "What is she doing with this tool?!" But she's making choices that you make in your 20s and into your 30s, or even older than that, by being with people that aren't really right for you. It's definitely a relatable storyline, and this season is going to be her turn to have fun and hopefully find a better match. I've heard a little bit of the direction of where the show's going, and I don't think she finds her "true love" match, but she has a lot of experiences that will help her along.

Kelsey's relationship with Liza is also a little bit strained right now. What can we expect in the third season when it comes to their friendship?

We did kind of make up in the last episode, but Kelsey sometimes surprises me even, with her reactions. Like when her friend is saying, "I caught him cheating on you," and she's like, "Mind your own business!" Reactions like that are surprising, so I'm sure they're going to have a little bit of conflict this season. This season is not tamer [than the first two], but it's also not as wild. Each character is going to have their own storyline, so hopefully we delve deeper into everyone and there's not as much pressure on the lie [that Liza is lying about her age].

I did hear some rumors that I can't share, but I think a few more people find out [about Liza's lie] at the end of the season, but not everyone!

Oh my gosh! It's about time.

I know! I'm like, "Wait, isn't our show over? Shouldn't everybody know?" But then I remember we got picked up for season four.

With "Younger," you've kind of solidified yourself as part of an incredibly beloved, iconic show for the second time in your career way after "Lizza McGuire." Did you ever think you'd be part of two shows that people would respond so well to?

First of all, thank you so much for saying that. That's really sweet. I still get surprised when I hear people that are like, "I love the show!" It's so exciting to have that again. Obviously, I feel lucky that Darren wanted to cast me in the show and writes really great stuff for all of us. But, no, I didn't ever think that, and I waited such a long time to land on another show. But you never really know what's going to happen. I feel lucky and we work really hard, so I think that people relate to the show and respond to it. We just need to keep going.

Your last album, Breath In. Breathe Out. was received incredibly well by your fans -- probably because it harkened back to your Dignity sound a bit. What can we expect from you in the future as far as your music is concerned?

Making the record was so much fun for me, and I hadn't made music in seven years. It was a totally different experience than I had had before. The music industry had changed so much, and I had had a child. I'm a completely different person [than I was back then]. It was cool, and I'm really proud of it, but it's not really a record that I would tour with. Also, I didn't have time to really give it the push that it needed with press and going around and promoting it. We started shooting ["Younger"] and life just kind of happened. Obviously, my son is my main priority.

Music is such a part of my life and my makeup, though, that I don't think I'll ever stop doing it. I just don't think it'll ever be on the scale that it used to be. I was in the studio a week ago just messing around, though, and I'm working with a new manager, so it's definitely still going on. It's just a little bit on the back burner.

You're launching your "Host One to Remember" campaign with Stella Artois. Can you talk to me a little bit about that and how it came to be?

I'm so excited to be back in the City! I'm here filming the third season of "Younger" -- usually we're here filming in the winter, so I'm really just enjoying the summer weather. This partnership with Stella Artois is perfect, because the summer season makes me think of drinking beer! [Laughs] I love Stella Artois, so it's really fun. I love hosting parties, and the whole idea is to "host one to remember," so I wanted to inspire people to "host one to remember" for themselves.

As a co-curator for the event tonight, what did you have to do exactly? And what can attendees expect when they step into the party?

There will definitely be a few surprises, and I'm working closely with Stella Artois to give them inspiration through telling them how I like to throw parties, which is definitely casual. I don't think you have to be super extravagant to host a memorable party, but nice touches always help. I bought these vintage bathtubs a little while ago, and I like to fill them with ice and [beverages] and, of course, Stella Artois, so people can help themselves and roam freely throughout the house.

I also usually cook some sort of dinner and write it on a chalkboard, too. My favorite thing right now is to get little potted plants and put out some chalk, so you can write your name on it and use it as a place setting or as a party favor. It lets you go home with something that will continue to live on after the party.

Parts of those elements will definitely be included in the party, but Stella Artois also has a really rich legacy, so we're going to be honoring one of their first brew masters, Sebastian Artois. There's going to be a whole experience where you walk room to room, blending past with future. It's going to be really fun!

Part of the campaign is about "timeless hosting" and celebrating the past, present and future, which to me signifies that there are certain rules that should always be followed when hosting a party, regardless of when or where. What are some rules you always try to follow when throwing a party?

Oh gosh, that's intimidating! I tend to have a more casual style, but I think that lighting is important, as is having a good playlist. I live in California, so it's also easier to have all of my doors open and have fresh flowers, too. I think it depends on the party, but I'm not usually the type to have a party catered -- I think the last party I had catered was my sister's baby shower. I tend to do smaller gatherings, and I love to cook for my guests. Hopefully that's memorable enough and, if it's not, they don't get to come back! [Laughs]

Yeah it does. It's funny, because I have this whole other group of friends who are girls I've met through [Luca's] school. I obviously also have my own group of friends that's separate from that, so the hosting style is very different depending on whether or not the kids are there. The kids are all swimming now, too, which is awesome because we can have little pool parties now!

More from AOL.com:
Martha Stewart doesn't know who 'this guy' is -- do you?!
Elle Fanning shows off her unexpected vocal chops in new viral video
You will never see Blake Shelton's nipples so long as you live

Twitter has a meltdown over food in Nick Jonas's teeth at 2020 Grammys: 'No one said …

Grammys 2020: Men steal the show on the red carpet