A traditional New England clambake involves layering seaweed, rocks, and seafood in a big bonfire pit in the sand, which, for a first-timer, is probably going to end in disaster.

For the uninitiated, a boil is an infinitely better idea — and you can still do it over a bonfire on the beach and call it a clambake.

In the Hamptons beachtown of Montauk, New York, they do the clambake a little different. Montaukians and Navy Beach seafood restaurant owners (and couple) Franklin Ferguson and Leyla Marchetto say the secret to a great Hamptons clambake is to brine everything overnight and finish the lobster and vegetables on the grill (or a bonfire with a grill grate overtop).

Ferguson was nice enough to give us the 411 on how to cook a Montauk-style clambake for two on the beach or at home.

Supplies if you're cooking on the beach: 1 potato-size, smooth beach stone, 1 Duraflame log, barbecue grate, firewood, matches, 1 large stock pot, 1 small pot (for the butter sauce), and of course, servingware, a cooler with cold drinks, and anything else you might want. 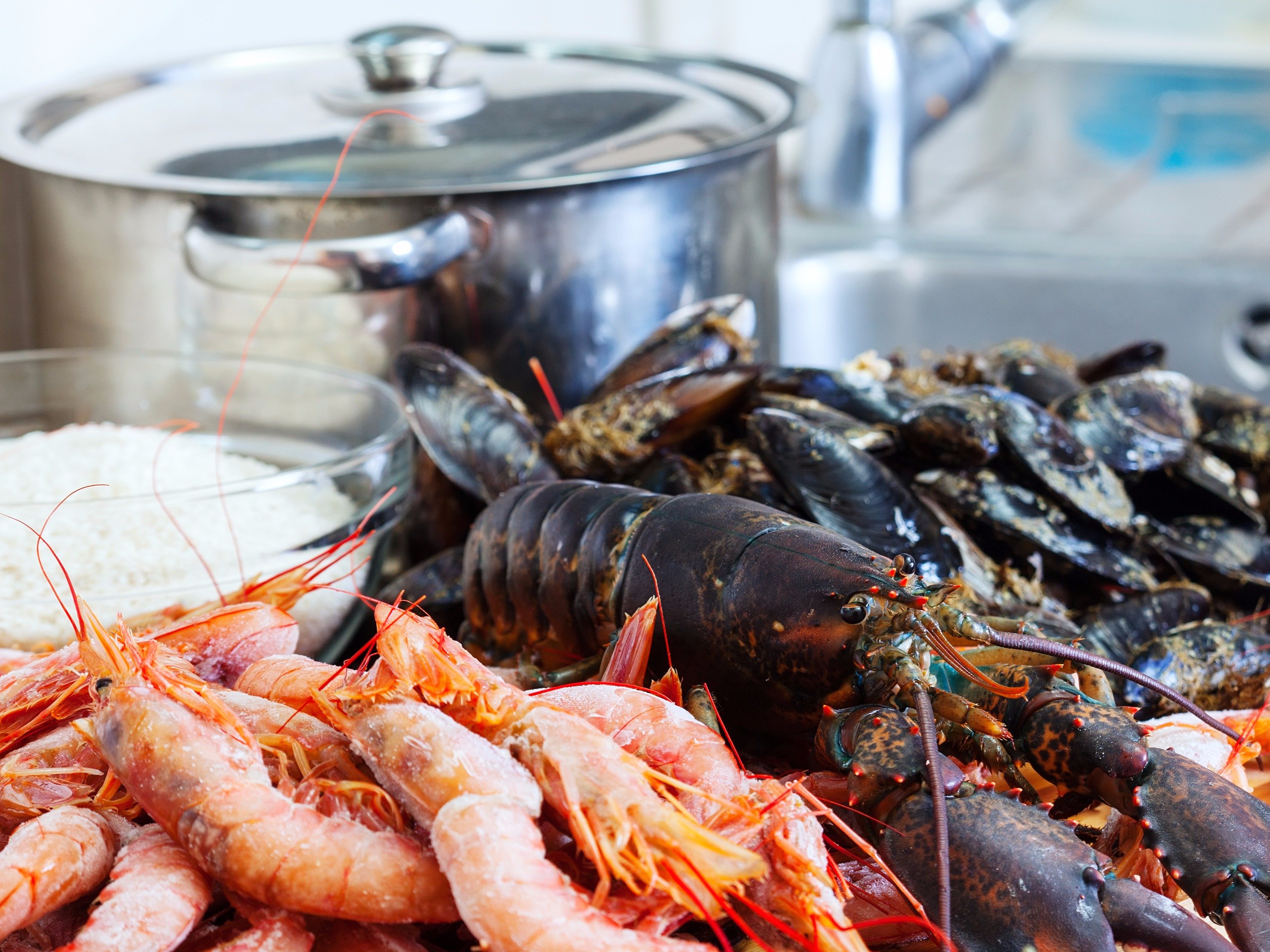 The night before your clambake, make your brine, or "tea," as Ferguson calls it, by bringing 4 quarts water, 1 cup each sugar and sea salt, pimento (your supermarket may label it as a cherry pepper), and bay leaf to a boil in a large pot.

Once the tea comes to a rolling boil, turn off the heat and cool it down before adding the whole lobsters, shrimp, corn, and potatoes.

STEP 2: Drain the seafood and, if cooking on the beach, pack it into a cooler with the other ingredients and supplies. 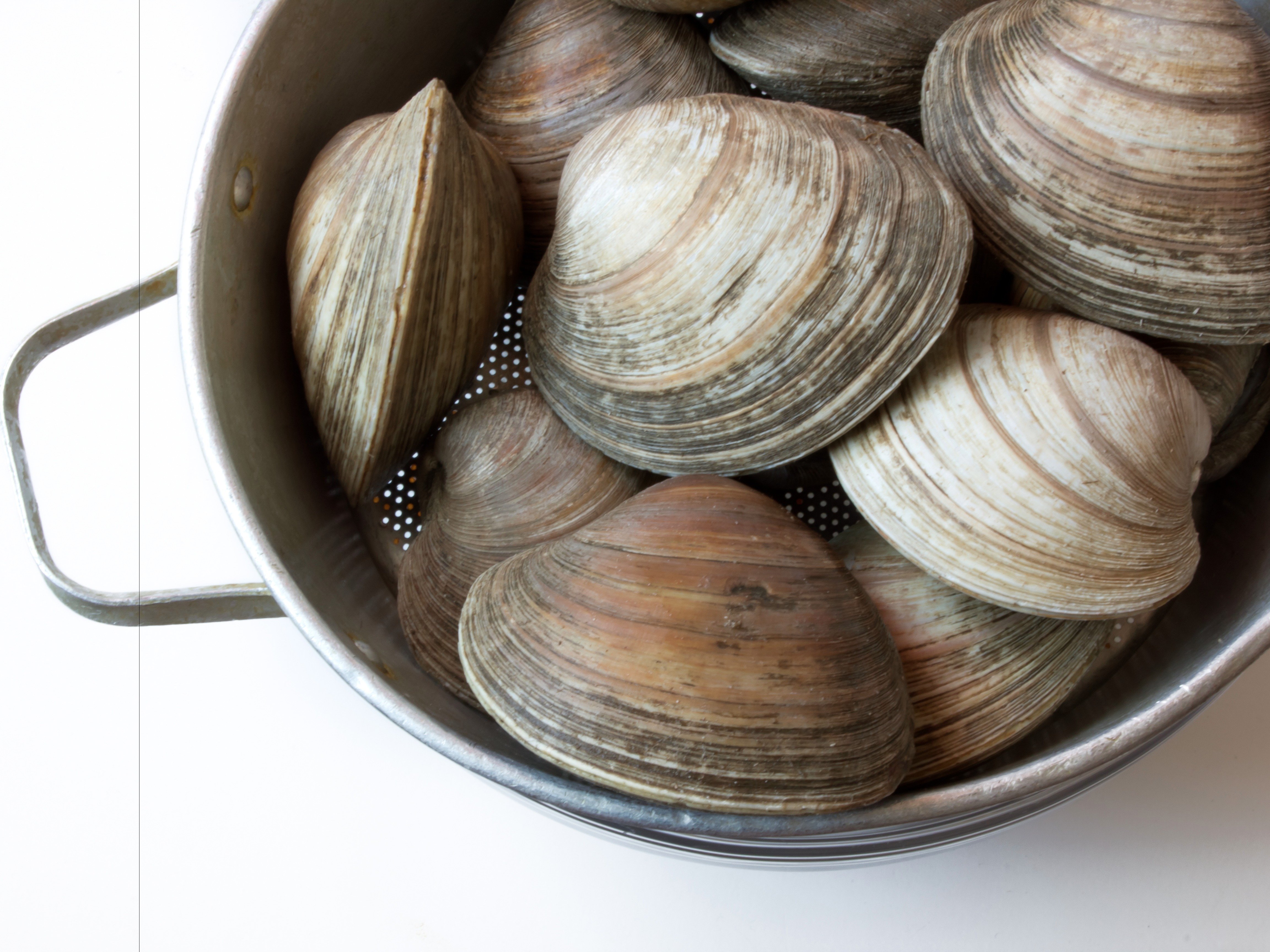 The next day, drain your brined seafood and pack it in a cooler along with the wine, butter, shallot, garlic, mussles, clams, and extra sea salt and fresh-cracked pepper. Bring the bonfire and cooking supplies mentioned above, too.

If cooking at home, simply drain your brined seafood, put it back in the now-empty pot you used for the brine, and move on to step three.

STEP 3: Build a bonfire (or light up a burner on your stove) and fill a pot with all your clambake ingredients. 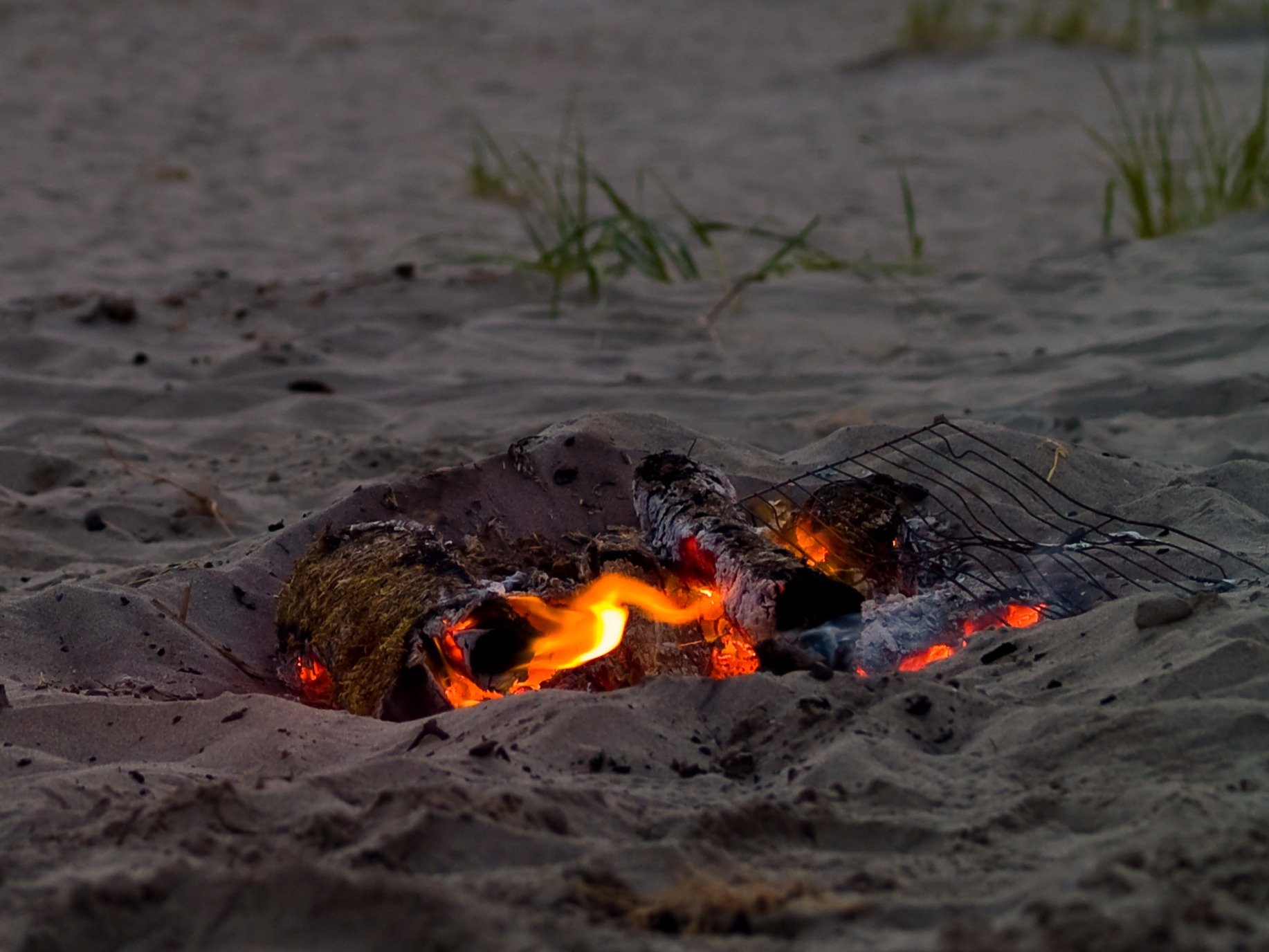 Bonfire instructions: To build a bonfire, dig a shallow hole, put the Duraflame log in the center and cover it with firewood, light it, and lay your barbecue grate on top.

After that's done — or after you've simply turned a nob on your stove at home — fill the pot with the wine, 1 stick butter, 4 whole garlic cloves, shallot wheels, and salt and pepper to taste. If cooking on the beach, drop a beach stone into the bottom of the pot first. It'll help retain the heat inside the pot.

Add all of your seafood and vegetables into the pot and cook until the clams and mussels open. At that point you can remove the pot from the heat and take out the lobster and veg, which won't be fully cooked yet.

STEP 4: Finish the lobster, potatoes and corn over the grill grate (or on your backyard grill if you're at home) and melt some butter for dipping. 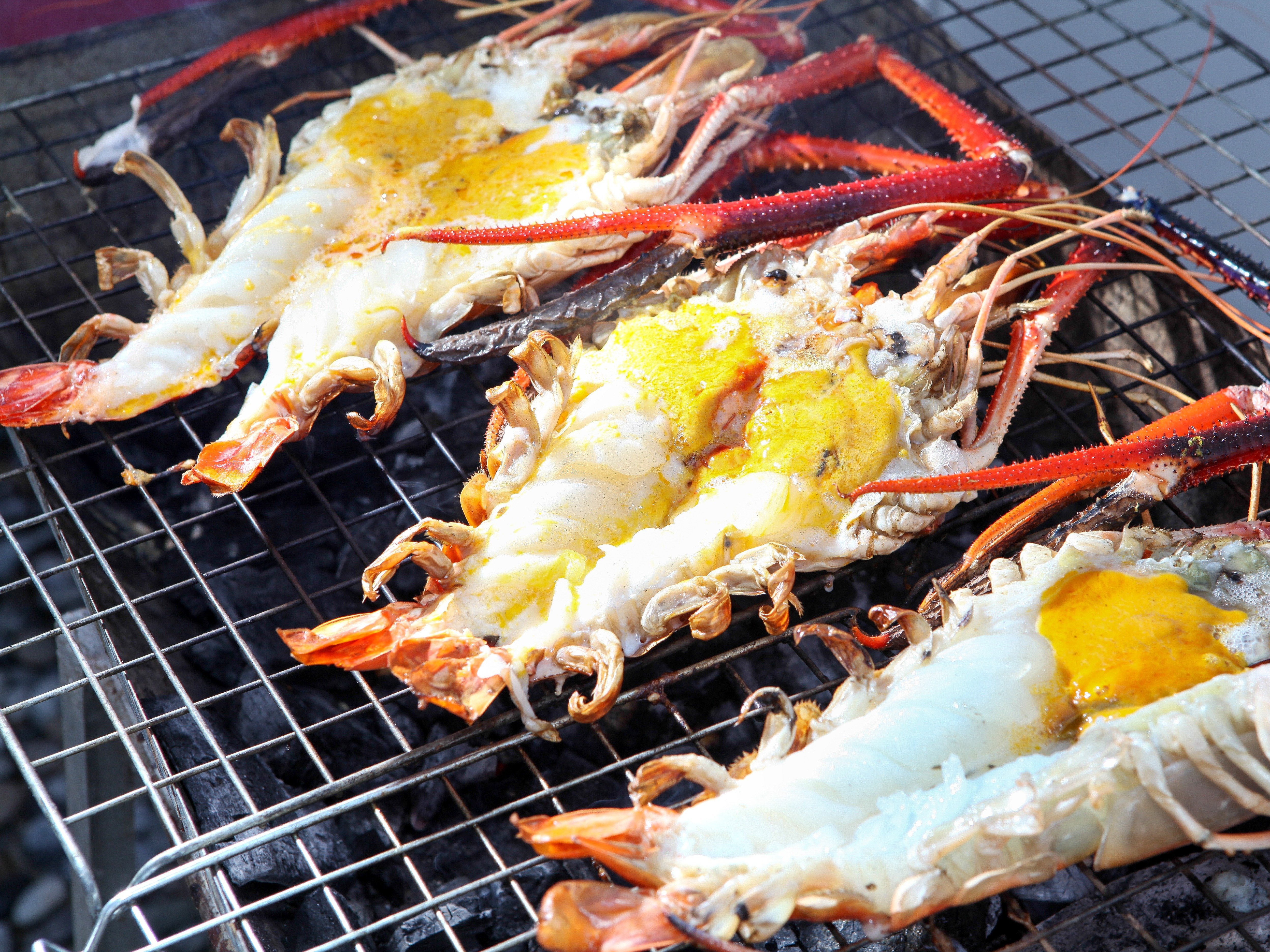 Cut the lobster in half from nose to tail and section off a portion of the grill grate with no open flame. Lay the lobster shell side down and add the potatoes and corn as well. While that's cooking throw the extra stick of butter in the small pot with some salt and pepper — this will be your dipping sauce. If cooking at home, just fire up your grill to finish the lobster and veg. 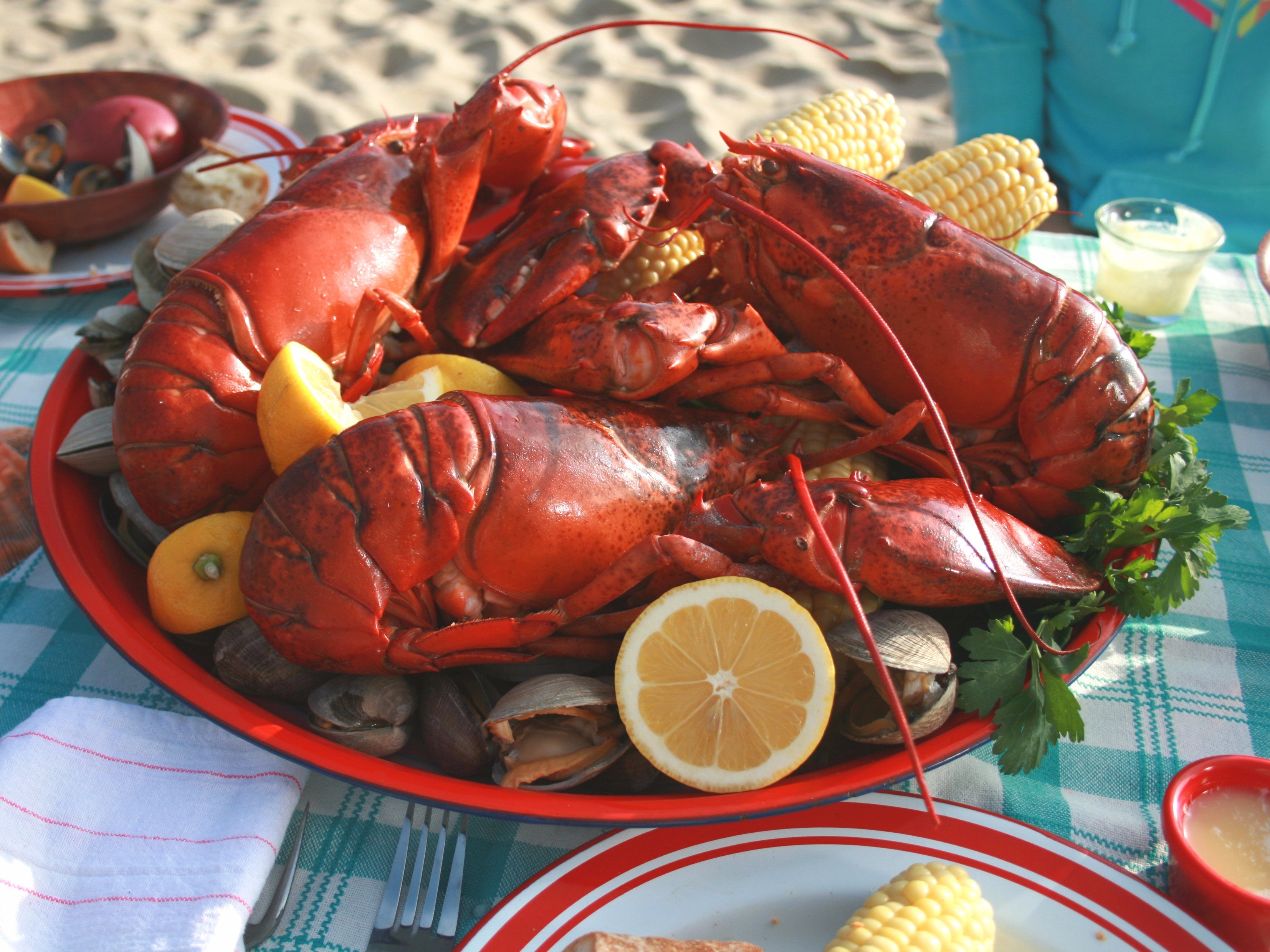 Scoop the broth and shellfish into a bowl and top with vegetables and lobster. And dip everything in melted butter. Ferguson also recommends a glass of Breezette rosé, the house blush wine at Navy Beach.

NOW WATCH: People were baffled by 50 sharks circling in shallow waters off the English coast

SEE ALSO: Here's how to eat a lobster from nose to tail — nasty bits and all

Here are some sides to accompany your delicious clambake: