Florida makes final preparations ahead of 1st hurricane of season 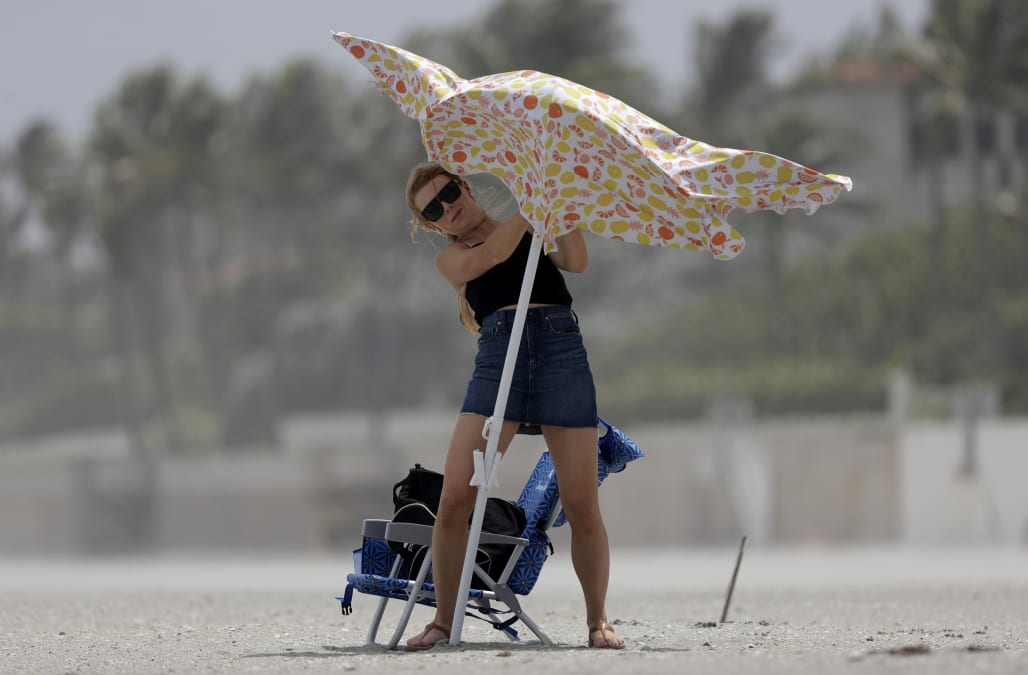 Final preparations were being made along Florida's Atlantic coast Saturday as the state braced for its first encounter from a hurricane this season.

Hurricane watches and warnings remained in effect ahead of Hurricane Isaias' expected arrival later Saturday. The storm was expected to continue its unwelcome stay into Sunday before it tracks farther north along the East Coast.

Isaias made landfall around 11 a.m. Eastern Time Saturday on the northern part of Andros Island in the Bahamas. The storm's maximum sustained winds had fluctuated between 80 and 85 mph throughout the morning. Its forward speed had also slowed as it crept along at around 12 mph, down from as much as 18 mph on Friday.

The storm came within 40 miles west-southwest of Nassau, the capital city of the Bahamas on Saturday, after leaving behind scenes of flooding in Puerto Rico late in the week. The National Guard rescued at least 35 people who were swept away by raging floodwaters in Puerto Rico, including small children and infants, but one woman remained missing, The Associated Press reported. The storm claimed the life of one man in the Dominican Republic as another 5,000 people were evacuated due to serious flooding, the AP said.

As the storm closed in on the Bahamas, residents were still rushing to complete preparations for the storm on Saturday, Paula Miller, Mercy Corps director for the Bahamas, told the AP, adding that people were still in long lines to buy gas on Grand Bahama.

"People are doing the best they can to prepare, but a lot of businesses still have not fully repaired their roofs or their structures" since devastating Hurricane Dorian struck in 2019, Miller said. "Even a lower level storm could really set them back."

The National Hurricane Center (NHC) said preparations to protect life and property in Florida "should be rushed to completion."

Florida Gov. Ron DeSantis declared a state of emergency in every coastal county of Florida's Atlantic Coast, stretching from Miami-Dade to Nassau counties, on Friday in preparation for the storm. The governor also sent a letter to President Donald Trump requesting a pre-landfall emergency declaration.

On Saturday morning, DeSantis noted on Twitter that the president had approved the request. "This will help our state respond quickly to any impacts from the storm," he wrote.

"While current projections have the eye of Isaias remaining at sea, the situation remains fluid and can change quickly," DeSantis said at a press conference on Friday. The Florida division for emergency management created new guidance on opening shelters amid the pandemic should they become necessary, he added. DeSantis called on Floridians to remain vigilant and heed warnings.

Miami-Dade County Mayor Carlos Giménez said Friday that 20 storm shelters were on standby to be opened. If they were to be used, they would have COVID-19 safety measures in place, according to The Associated Press.

"We still don't think there is a need to open shelters for this storm, but they are ready," he said. Hotel rooms have been readied along the east coast of Florida should those infected with COVID-19 need to evacuate and remain quarantined.

Florida has been experiencing a major surge in COVID-19 cases over the last month. On Friday, Florida reported a record number of COVID-19 fatalities for the fourth straight day, bringing the total death toll there since the pandemic began to nearly 7,000, data from John Hopkins University shows.

Mask-wearing customers could be seen shopping for needed groceries and other supplies ahead of the storm's anticipated arrival.

AccuWeather National Weather Reporter Jonathan Petramala reported live from Cocoa Beach, Florida, on Friday and noted that sandbag locations were being opened up all across Florida's east coast ahead of the storm's anticipated heavy rain.

AccuWeather meteorologists say southeastern Florida will start to endure deteriorating conditions Saturday as the hurricane tracks just about 309 miles or so from the coastline.

The storm will unleash wind gusts of 40-60 mph with an AccuWeather Local StormMax™ of 70 mph over eastern Florida during Saturday and Sunday before it makes its way toward the Carolinas. Winds of this magnitude will be strong enough to cause localized power outages and cause some minor damage.

Rainfall amounts in the range of 2-4 inches across eastern Florida will be common although some locally higher amounts are possible.

Isaias is expected to encounter wind shear throughout Saturday. If wind shear amounts increase, the storm could have lower wind speeds as it passes Florida, forecasters say.

Farther north along the coast, the Carolinas were also bracing for the storm, which meteorologists say could make landfall near Wilmington, North Carolina, on Monday evening. North Carolina Gov. Roy Cooper issued a state of emergency for portions of the state on Friday and urged residents to prepare ahead of the hurricane's approach.

Officials along the North Carolina coast weren't taking any chances given the possibility of a strike by Isaias. Mandatory evacuations were issued Friday on Ocracoke Island, one of the places hardest hit last year by Hurricane Dorian.

"Although the track and arrival of the hurricane could still change, now is the time for North Carolinians to prepare," Cooper said. "Hurricane preparations will be different given the COVID-19 pandemic, and families need to keep that in mind as they get ready."

Isaias has already written a new page in the record books. It became the earliest "I-storm" in recorded history on Wednesday night, surpassing Irene, which formed on Aug. 7, 2005. The storm was also the earliest in the season to move through the Bahamas since 1995 when Category 1 Erin passed over the Abaco Islands and Grand Bahama on Aug. 1-2, according to Colorado State tropical meteorologist Philip Klotzbach.