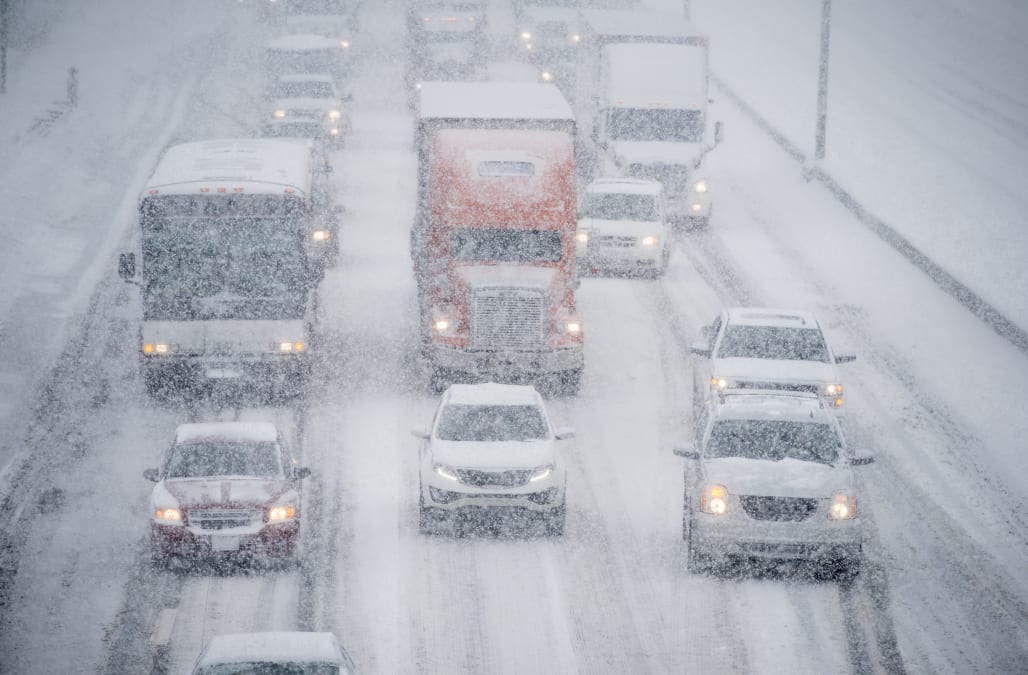 A burst of painful cold will follow a storm that will unleash rain along the Eastern Seaboard and more snow to the northern tier as a weather pattern seemingly stuck on repeat this winter plays out yet again.

Even though Arctic air of the magnitude forecast for the eastern United States is quite common during the middle of February, the upcoming frigid conditions to end this week could be a shock for millions to say the least amid a mild season.

It has been a warm winter for much of the region with temperature departures ranging from 4 to 8 degrees Fahrenheit above average.

Temperatures are expected take a nose dive and drop off by as much as 30 to 50 degrees Fahrenheit from Thursday daytime to Friday night.

Friday's highs could even be 15-25 degrees lower than Thursday's.

Temperatures ranging from the 30s across the northern New England to the 80s in the South on Thursday will be swapped with Saturday morning temperatures below zero in the northern tier to the 20s and 30s in much of the South.

By Saturday morning, many thermometers in the region will be registering their lowest mark of the winter or may be within a couple of degrees of the season's benchmark set way back in mid-December, during an earlier outbreak of Arctic air.

In New York City, the temperature has dipped into the teens only once this winter season. That episode was during the brief cold snap ahead of Christmas on Dec. 19, prior to the official start of winter, Dec. 21. The period from Dec. 1 to March 31 is typically the coldest three months of the year in the Big Apple and much of the East.

The upcoming Arctic outbreak will be brief but result in a surge of heating demands and have people hunting for their hats and gloves that may have been tossed aside in recent weeks.

The penetrating cold could result in some damage to buds that have softened up due to mild winter conditions, particularly on some fruit trees and non-native grape vines from Michigan to upstate New York and Pennsylvania.

Additional bursts of Arctic air can follow through the rest of February.

"Back-and-forth mild and cold weather conditions are likely to continue for the remainder of the month," AccuWeather Lead Long-Range Meteorologist Paul Pastelok said.

RELATED: Take a look at the worst winter storms in the US in 2019:

"We are actually lowering our long-range forecast temperatures for around Feb. 20 and 21," Pastelok said.

It is possible there is another plunge in temperature in the next couple of weeks that is within a few degrees to the one later this week.

"We are trending temperatures down in areas of the Midwest from double-digit above-average to lower single-digit above average and even trending parts of the Northeast to below average for part of the latter half of the month," he said, adding that computer models have had a tough time picking up on storm timing, track and the magnitude of cold this winter season.

Normal temperatures trend upward from beginning to end of February by an average of 5-10 degrees. This means that the same temperature may be well above average right now but may be below average by late-February.

Lengthening daylight and a slightly higher sun angle in February are the main contributors to the climbing temperature trend. Temperatures typically increase at an even faster pace during March and April.

Cold waves through the end of February will be brief as the polar vortex is forecast to generally remain strong and hover near its home position above the Arctic Circle.

Over the next week or so, conditions look to be void of substantial snow from the central Appalachians to the coastal Northeast. However, there is still a chance the occasional cold waves may hook up with a storm in just the right way for snow to occur prior to the end of the month and even farther ahead into March.

"The pattern will not be void of storms, so there is always a risk of a snow event on the East Coast, even during a mild winter and an average spring," Pastelok said.

A strong atmospheric road block over Greenland and the Atlantic Ocean is not needed for a snowfall or two over the central Appalachians and coastal Northeast -- but that pattern would be needed to set the region up for a major snowstorm. AccuWeather forecasters aren't seeing indications that this type of blocking pattern will develop.