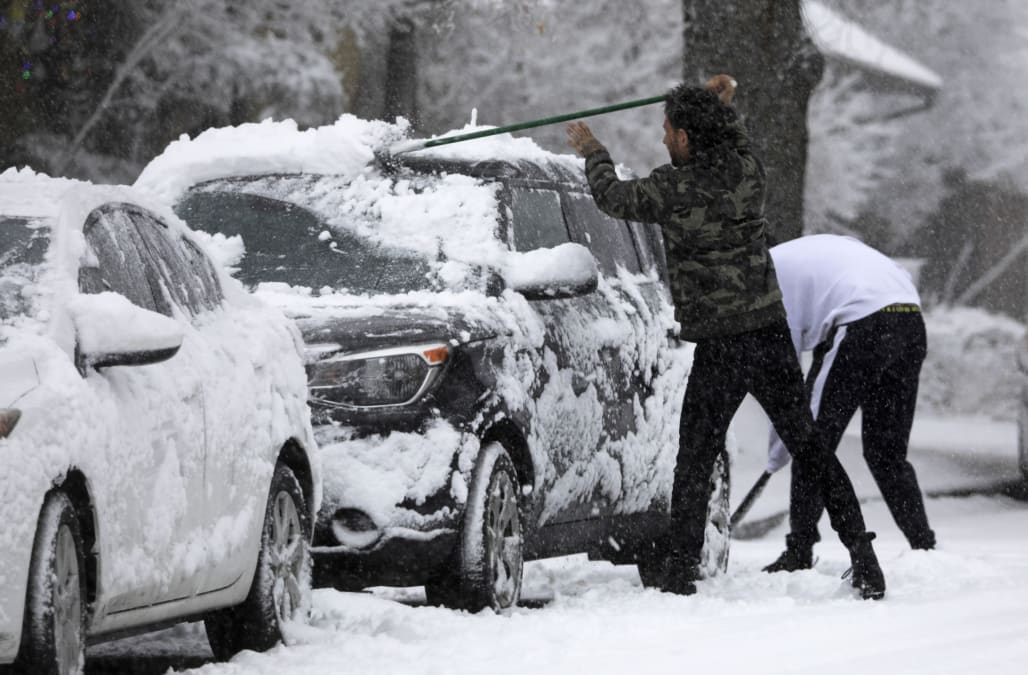 A large storm system will affect a large portion of the continental United States on Wednesday, producing everything from snow and ice to severe thunderstorms and flooding rainfall.

Eight to 10 inches of snow has already fallen across parts of northern Texas, and there's more on its way.

Oklahoma City metro-area has seen 2-4” so far and it's still snowing.

On Wednesday, moderate snow shifts from the Southern and Central Plains during the morning hours to the Midwest by the afternoon. Along the way, ice accumulation amounts will generally be 0.10-0.25 inches while 2-6 inches of snow will fall from southwest Texas to the Great Lakes.

February winter weather across U.S.
WASHINGTON, DC - FEBRUARY 13: Ai Koid, 25, fights gusty wind chills and snow while walking to the bus stop at Dupont Circle in Washington, D.C., February 13, 2016, to catch a bus to New York. (Photo by Astrid Riecken For The Washington Post via Getty Images)
Up Next

At the same time, thunderstorms will erupt across the Southeast by the afternoon and evening hours where 12 million people are under the risk for severe thunderstorms capable of damaging winds, hail and isolated tornadoes across the Southeast and Gulf Coast. New Orleans, Shreveport, Louisiana, Houston, Mobile and Birmingham, Alabama, are cities that need to be on guard for severe weather.

On Thursday, the storm hits the East Coast. The urban corridor from Washington, D.C. to New York can expect rain, while the wintry weather will stay confined to the interior northeast and New England. That’s where snow accumulations of up to 6 inches are possible, along with ice accumulations of 0.10-0.25 inches.

Severe storms are possible for 29 million people across portions of Florida, Georgia, North Carolina and South Carolina. Damaging winds will be the most likely threat but tornadoes are possible as well. Cities at risk will be Tampa, Orlando, Tallahassee, Jacksonville in Florida, Charleston, South Carolina, Charlotte and Raleigh in North Carolina. Rainfall totals of 2-4 inches (locally higher up to 6 inches) possible from the Gulf Coast, with rainfall rates that could be 2 inches per hour at times. The risk for flash flooding is highest Thursday for parts of the southern Appalachians, North Carolina and southern Virginia.