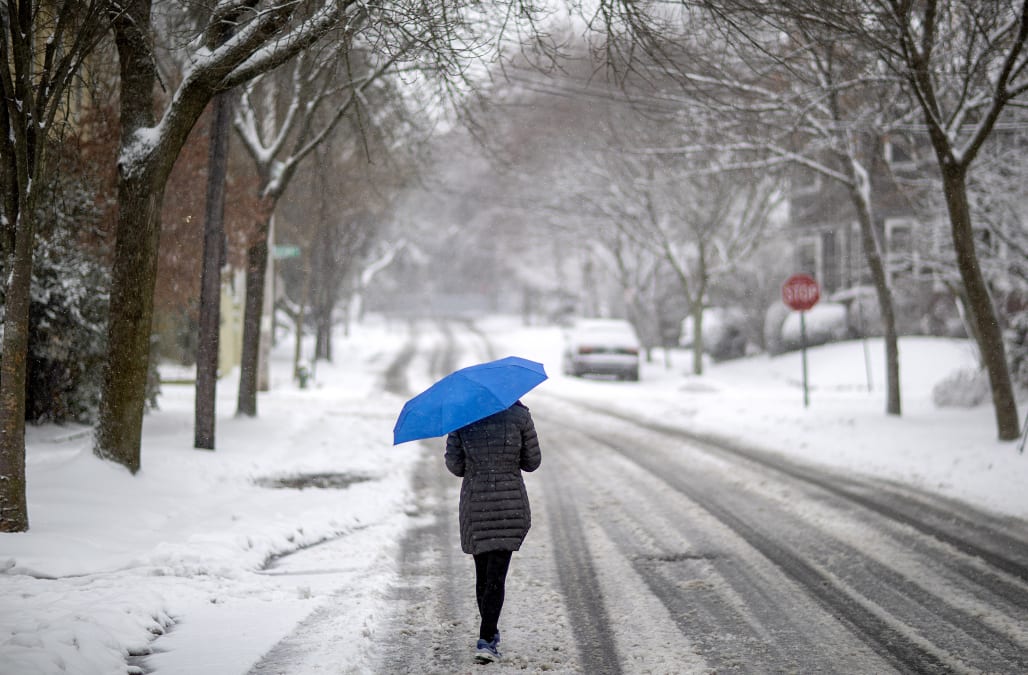 Forecasters say troublesome winter weather will affect the northeastern United States for the second weekend in a row, and even though the storm headed east this weekend is not expected to bring the same precipitation pattern as the last one, it could bring its share of travel hazards and delays.

After impacting the Central states, the storm will spread across the Northeast from west to east spanning late Friday to Saturday night.

"All or most of this storm is likely to bring rain to the major Interstate 95 cities from Washington, D.C., and Baltimore to Philadelphia and New York City," AccuWeather Senior Meteorologist Rob Miller said.

"At this time, there is only a remote chance of enough cold air to be manufactured by the storm or drawn in from the north to bring a change to snow in these mid-Atlantic areas," Miller added.

The chance of a change back to snow has somewhat higher odds in southeastern New England, but if that does occur, it will be right before the storm departs.

Although late January is typically the time of the year when cold air tends to put up a fight, meteorologists say that will not likely be the case with this storm for most of the heavily populated I-95 corridor in the East.

It will be a different story for areas farther north and west, where a wintry mix may cause more problems. Boston and, to some extent, Hartford, Connecticut, are likely to receive a combination of snow and rain from the storm with slippery travel during at least part of the storm.

Interior locations like Pittsburgh and Youngstown, Ohio, are expected to experience rain for most of the storm, but a change to accumulating snow is possible toward the end.

"Even where mostly rain is predicted, there could be some funny business and slick areas to watch out for," Miller said. Even though Arctic air in place this week will modify prior to the arrival of the storm, some surfaces, especially those in the shade and in elevated areas, will remain cold enough for spotty ice to form for a time.

The potential for pockets of a bit of freezing rain could extend as far south as the Piedmont areas of western Virginia to coastal areas as far north as Maine. Despite the risk of patchy ice, a widespread major ice event is not expected with this storm.

AccuWeather meteorologists say there is one zone where heavy snow will fall during most of the storm, and the central Appalachians to central New England is the likely bull's-eye.

"A general 6-10 inches of snow is likely from the mountains of central New York to western Maine," Miller said.

An AccuWeather Local StormMax™ of 14 inches can occur in portions of the Catskills, Berkshires, Adirondacks, Green Mountains and White Mountains, as well as the northern part of the Alleghenies.

In other areas from western and northern Pennsylvania to northern Maine, a general 1-6 inches of snow are likely to fall. The mountains of West Virginia and western Maryland are also likely experience a snowfall within this range.

Except for the highest elevations, where snow does fall, the snow is likely to be wet and clinging in nature due to air temperatures near or perhaps slightly above freezing. This means that rock salt should be able to do a decent job at melting the snow, ice and slush, whereas it would not normally do the job with a typical late January storm with temperatures in the single digits, teens and lower 20s F.

The storm will wind down from west to east spanning later Saturday to Sunday afternoon.

A blast of Arctic air is not expected to follow in the wake of the storm. Instead, a blend of air from the Pacific and southwestern Canada will settle in. The air will be cold enough to support snow showers and a few bands of lake-effect snow from the Great Lakes to the central Appalachians on Sunday.

Blustery conditions over much of the region and cloud cover from the mountains to the Great Lakes will add some chill. However, with the polar vortex expected to remain strong and to retreat north once again, temperatures are likely to be above average in most cases.