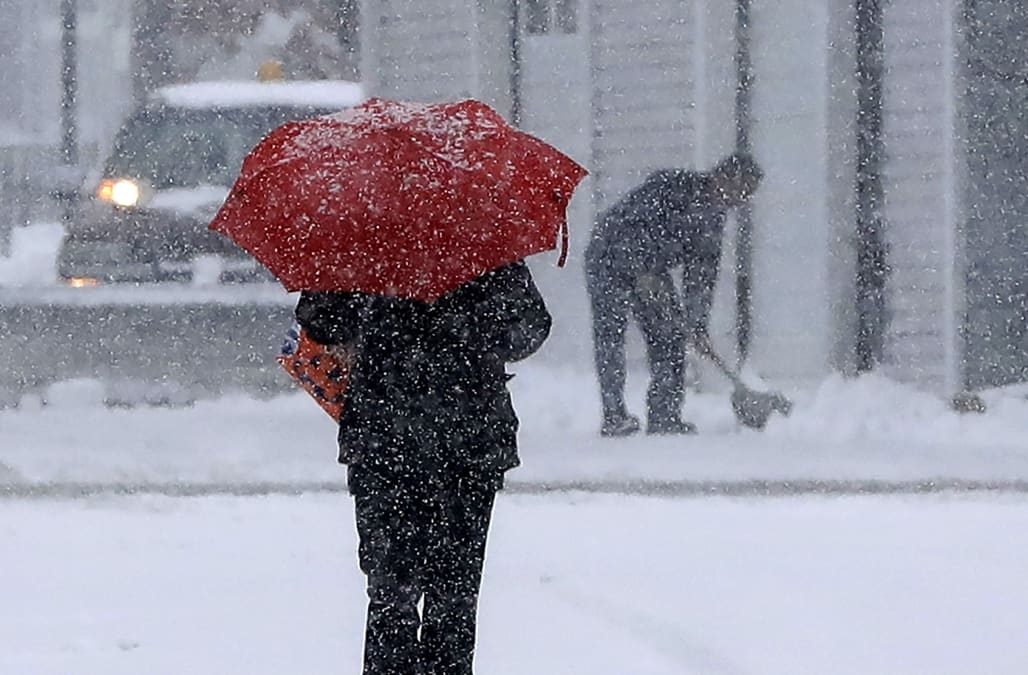 A new round of travel problems associated with the next winter storm will spread from the central United States to the Northeast following a lull from snow and ice for a time this week.

The storm is destined to bring wintry precipitation and travel problems over a broad swath, even though Arctic air in place to start this week will grow stale and trend milder over time.

First, a weak storm producing spotty rain and mountain snow in California on Monday will swing eastward at midweek.

"That preliminary storm will bring a bit of snow and a wintry mix to portions of the central Plains and Upper Midwest during Tuesday night and Wednesday," AccuWeather Meteorologist Matt Benz said.

"The main storm to affect the Central and Northeastern states will take shape a short time later and will capture the midweek storm before moving along," Benz said.

During Wednesday night to Friday, a swath of snow from the main storm is forecast to extend from parts of northeastern Kansas to northern Michigan.

While only up to a few inches of snow are likely to fall in this swath, enough can fall to make some roads slippery in the Interstate 35, I-80 and I-90 corridors. Cities that have the potential to receive up to a few inches of snow or a combination of rain and snow include Kansas City, Missouri; Des Moines, Iowa; Omaha, Nebraska; Madison, Wisconsin; Minneapolis and perhaps Chicago.

As the system continues to move along at the end of the week and this weekend, some significant differences are likely to develop in the structure and track of the storm, when compared to last weekend.

The most recent storm that unfolded this past weekend tracked toward the Great Lakes and had plenty of cold air to work with.

The storm this weekend will be operating on stale Arctic cold air, and will travel eastward, rather than northward and is also likely to hook up with the jet stream level of the atmosphere.

With the storm still several days away form fully taking shape, forecasters say there is uncertainty with regards to the specific timing as well as forms and intensity of precipitation.

Here is what we do know at this time for the weekend storm in the Northeast.

With the leftover Arctic air being cool at best, the initial form of precipitation is likely to be more of the liquid variety for the Ohio Valley, central Appalachians, mid-Atlantic coast and southern New England. Rain or a combination of snow, ice and rain are likely in these areas for a while during the first part of the storm.

Forecasters caution that because this storm will take a more eastward, rather than northward track, and the air aloft may turn colder over part of the storm, a transition from rain to snow or from an icy mix to snow can take place in parts of the Ohio Valley and central Appalachians. There's a remote chance of the same thing happening along a stretch of the I-95 corridor of the mid-Atlantic and southern New England.

There is also some hint of a reinforcing dose of cold air developing over northern New England and southeastern Canada, which could be pulled into the storm and increase the chances of a change to snow farther south and perhaps causing the snow to become heavy over the central Appalachians and in central and southern New England.

Details will unfold with the storm as the weekend progresses. There are bound to be some interesting changes in the forecast with this tricky storm as more information becomes available.

It is probably too early to change plans for this weekend in parts of the Midwest or the Northeast as weather-related problems may only occur during a limited time. However, as with most activities and travel plans this time of the year, it generally pays to have some flexibility, even when it's not all that cold as storms approach.