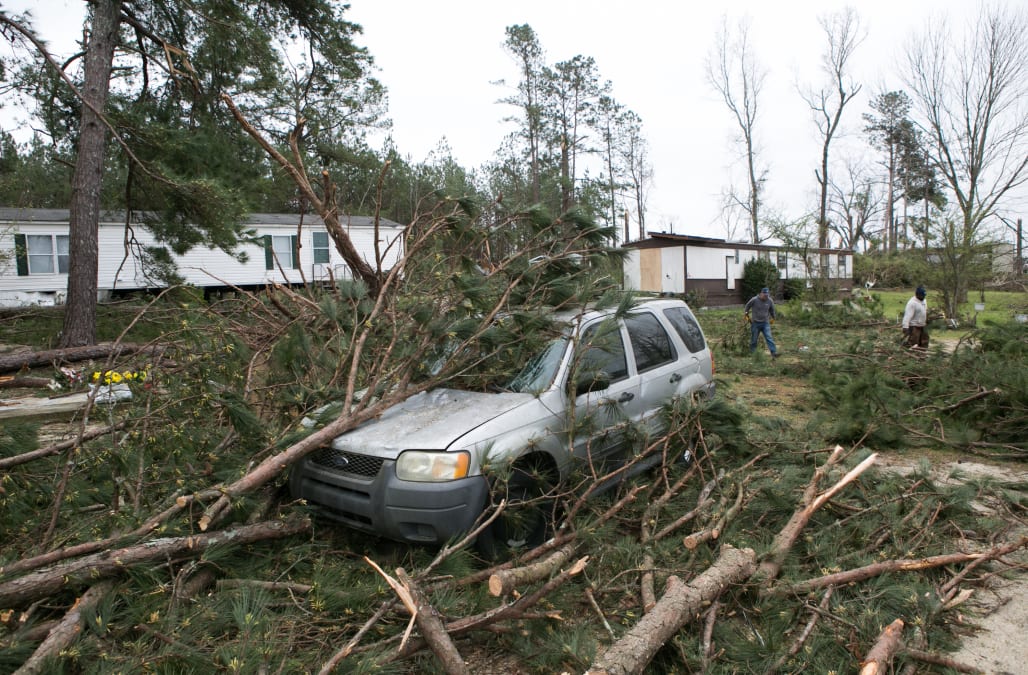 The second severe weather outbreak in less than a week will bring the risk of tornadoes and will strike across the southern United States, parts of the Midwest and Northeast from late Wednesday through Saturday.

AccuWeather estimates that 118 million people are at risk during the upcoming severe weather outbreak. The storms will hit as travel, outdoor plans and religious services ramp up as the Easter holiday approaches.

"Some of the same communities devastated by this weekend's severe weather in the South will be at risk again," according to AccuWeather Senior Meteorologist Kristina Pydynowski.

While the number of tornadoes produced by this setup may be lower than the more than three dozen twisters produced this past weekend, all it takes is for one tornado to strike a populated area to threaten lives and cause great property damage. At least nine people died, in the storms, including three children.

Robert Scott looks through a family Bible that he pulled out of the rubble Sunday, April 14, 2019, from his Seely Drive home outside of Hamilton, Miss., after an apparent tornado touched down Saturday night. (AP Photo/Jim Lytle)

There is the likelihood for the tornado threat to extend well after dark each night through Friday night. Nocturnal thunderstorms with high winds and tornadoes are especially dangerous as there is the risk that people will sleep through warnings or some others may not hear the dangerous storms coming.

This severe weather threat, like the one spanning this past Friday to Monday includes the full spectrum of potentially damaging and dangerous phenomenon ranging from high wind gusts to large hail, flash flooding, frequent lightning strikes and tornadoes.

"The first storms in the outbreak may begin with large hail and flash flooding in parts of southern Kansas, northern Oklahoma and northwestern Texas during Wednesday afternoon," according to AccuWeather Lead Storm Warning Meteorologist Eddie Walker.

"However, big, dangerous storms may follow late in the day Wednesday in central Texas." Walker said.

The Dallas metro area will be at greatest risk for severe weather and major travel delays from late Wednesday afternoon to Wednesday evening.

Wednesday night may bring multiple violent storms including the risk of tornadoes in a swath from Arkansas, southward to northeastern and central Texas to northwestern Louisiana.

During the day Thursday, the risk of severe thunderstorms and the potential for isolated tornadoes will extend from southern Illinois and southwestern Indiana to near the coasts of Louisiana and Mississippi.

During Thursday night, this risk will advance slowly eastward and is likely to extend from southeastern Indiana to the Alabama and Florida panhandles. While the risk of tornadoes may be somewhat lower when compared to Wednesday night, there is still some risk of violent storms after dark in this swath.

Storms with the risk of flash flooding and powerful wind gusts may reach the Atlanta metro area late Thursday night to Friday morning. Expect major travel delays during this time.

The storm producing severe weather is likely to gain some strength and get a bump in moisture as it nears the Atlantic Ocean on Friday and Friday night.

"Friday has the potential to bring an elevated risk of severe weather, including storms with tornadoes and large hail to areas in the Carolinas," Walker said.

The risk of severe storms is likely to extend farther north in Virginia, Maryland and Delaware, and farther south in Georgia and the Florida Peninsula from late Friday to Friday night.

Even storms in portions of Pennsylvania, West Virginia, New Jersey and New York state are likely to be heavy and may become briefly severe.

The major cities of Washington, D.C., Baltimore, Philadelphia and New York City, can be hit with heavy enough rain to cause travel delays related to flooding and perhaps wind gusts strong enough to cause property damage.

While the greatest threat for severe thunderstorms is likely to have diminished substantially by Saturday midday in New England, there is still the potential for gusty storms that can break tree limbs.

Torrential rain and flash flooding will be the primary threat by the time the storms cross the Hudson River and advance through New England to the coasts of Massachusetts, New Hampshire and Maine.

Some of the storms may still be potent enough to produce frequent lightning strikes on Saturday.

People are urged to take the severe weather threat seriously and have a plan of action in place before storms hit.

Download the free AccuWeather app to stay alert to severe weather watches and warnings. Keep checking back for updates on AccuWeather.com and stay tuned to the AccuWeather Network on DirecTV, Frontier and Verizon Fios.

In addition to severe thunderstorms and tornadoes, the same storm system will aggravate existing flooding and may bring new flooding to portions of the Central states.