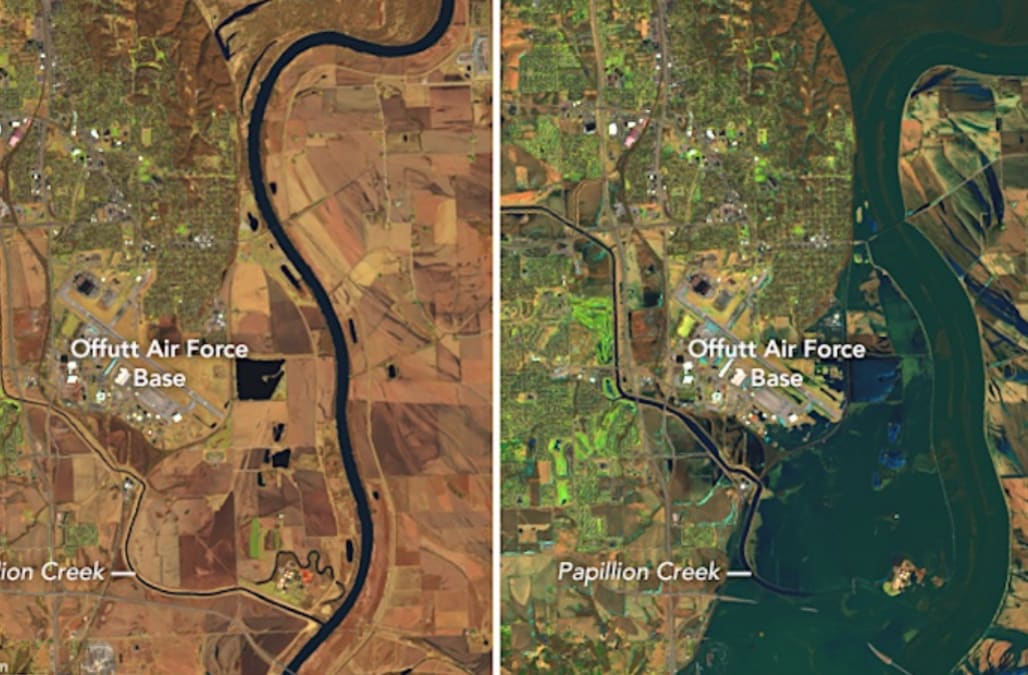 In 1948, Air Force Secretary Stuart Symington stationed the United States' long-range nuclear bombers at Offutt Air Force Base in eastern Nebraska, a location safe in the middle of the nation and well-insulated from the coast.

But 70 years later, the base — now home to the U.S. Strategic Command which deters "catastrophic actions from adversaries and poses an immediate threat to any actor who questions U.S. resolve by demonstrating our capabilities" — isn't safe from historic and record-setting floods.

Intense rains on top of the rapid melting of ample snow has inundated large swathes of Nebraska and a full one-third of the Offutt Air Force Base, including the headquarters building.

NASA's Landsat 8 satellite captured before and after images of the flooding — which the European Union Earth Observation Programme called "biblical." The overloaded river burgeoned in size, creeping into Offutt, neighborhoods, and farmlands.

A number of potent factors mixed to create what Offutt Air Force Base Commander Mike Manion has labeled a "1,000 year flood" — meaning there's only a one in 1,000 chance of such an extreme event happening in any given year.

SEE ALSO: The Green New Deal: Historians weigh in on the immense scale required to pull it off

If that wasn't enough, big rains in 2018 had already "loaded the dice even more," meteorologist Bryce Anderson noted on Twitter: A thawed ground, already saturated with water, wouldn't have been able to soak up much water anyway, he said.

Historic flooding in #Nebraska has over 74 cities under emergency declarations. Shown here are before and after images of Offutt Air Force Base along the #Missouri River. #NebraskaFlood#NebraskaStronghttps://t.co/yl9x3FH3RDpic.twitter.com/WSBzez4BkA

On top of this confluence of extreme weather events, Earth's atmosphere is considerably different than it was a century ago. Specifically, the climate has warmed by 1 degree Celsius (1.8 Fahrenheit), and due to simple physics, the warmer air is able to hold more water vapor. Specifically, for every 1 degree Celsius of warming, the air can hold seven percent more water.

That means more intense downpours. Between 1958 and 2012, the amount of rain in the heaviest rainfall events in the midwest shot up by 37 percent, according to U.S. government scientists.

Forthcoming research will reveal the role climate change played during these floods, though atmospheric scientists expect this same climate lever to bring more intense precipitation blasts to other parts of the nation in the near future, notably California.

On March 17, the National Weather Service (NWS) expected the Missouri River just south of Offutt Air Force Base to break record levels by a whopping four feet, noted CBS meteorologist Eric Fisher. The forecast turned out to be almost spot on.

"That's unreal for a river with some big floods in the past," Fisher wrote.

More from Mashable:
A new limited MoviePass offer comes close to the tantalizing original plan
It looks like Waymo is about to expand its self-driving taxi service
Get six months of Amazon Music Unlimited *for free* when you buy select Echo or Fire devices