Rain, wintry mix to chill north-central US this weekend 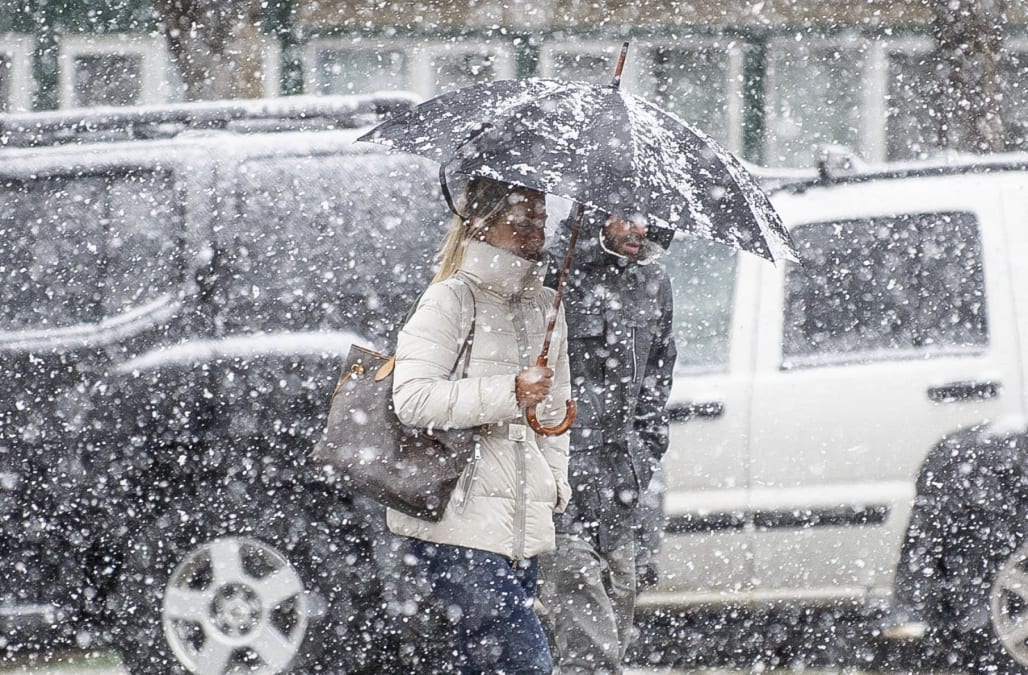 A storm will roll through the north-central United States with chilly rain and even some wet snowflakes during the first weekend of November.

While the storm will be less potent than the one targeting the Northeast, it could throw a wrench in people's plans to view the last vestiges of fall color, rake the yard, attend a sporting event or take part in other outdoor activities.

Download the AccuWeather app to know exactly when wet weather may dampen your weekend plans.

"As a storm moves southeastward from Montana and then into parts of the northern Plains and Midwest this weekend, both rain and snow will fall along its track," said AccuWeather Meteorologist Ryan Adamson.

The best chance for snow to accumulate and create slick travel will be on Friday night and Saturday morning across northeastern Montana and into western and central North Dakota.

"While many areas will start as rain or a mix of rain and snow, precipitation should change to all snow as colder air arrives," Adamson said, adding that several inches of snow would accumulate.

To the delight of ski resorts, accumulating snowfall will also spread southward through the northern and central Rockies into the first part of the weekend.

"As the storm continues southeastward on Saturday, rain will become the predominate precipitation type in much of South Dakota, Minnesota, Nebraska and Iowa," Adamson said.

14 PHOTOS
Fun in the snow around the world
See Gallery

"Residents and visitors in these areas may want to make plans indoors," he added.

The rain will be more of a nuisance than a major disruption, but motorists should use caution as sections of interstates 29, 35, 80 and 90 can turn slick, creating a heightened risk of vehicles hydroplaning at highway speeds.

Wet snowflakes can mix in with the rain across the northern tier.

Breezy conditions will also whip up around the storm, making it feel downright raw in some areas despite high temperatures not being too far from seasonable levels, generally in the 40s and 50s Fahrenheit.

AccuWeather RealFeel® temperatures can be 5-10 degrees lower than the actual thermometer reading.

Anyone who does venture out and brave the damp weather will need to not only protect against the rain but also layer up.

The strongest winds will blow across the front range of the central Rockies and adjacent High Plains on Saturday, necessitating motorists to keep a firm grip on the steering wheel along stretches of interstates 70, 76, 80 and 90.

The storm's reach will become more expansive by Sunday.

Minneapolis; Madison, Wisconsin; Chicago; St. Louis; Memphis, Tennessee; Shreveport, Louisiana; and Houston; are among the communities that can be dampened by rain at the end of the weekend.

Showers and thunderstorms will return to areas of eastern Texas and Louisiana that are cleaning up after a recent outbreak of severe weather.

While the risk of severe storms will be rather low on Sunday, compared to the middle of the week, a few feisty thunderstorms can rumble through with locally damaging winds.

Farther north, a mixture of rain and snow or a period of all snow can occur across the Arrowhead of Minnesota, northern Wisconsin and the upper Peninsula of Michigan from Saturday night into Sunday.

The central U.S. will have little time to dry out before the next storm eyes the region early next week, which may have an impact on voter turnout on Election Day.

More from Accuweather:
Severe weather to rock southeastern US on 1st day of November
Halloween storm to raise flood, severe storm risk from Deep South to Ohio Valley
Cold air to blast into midwestern, northeastern US with gusty winds, snow showers this weekend