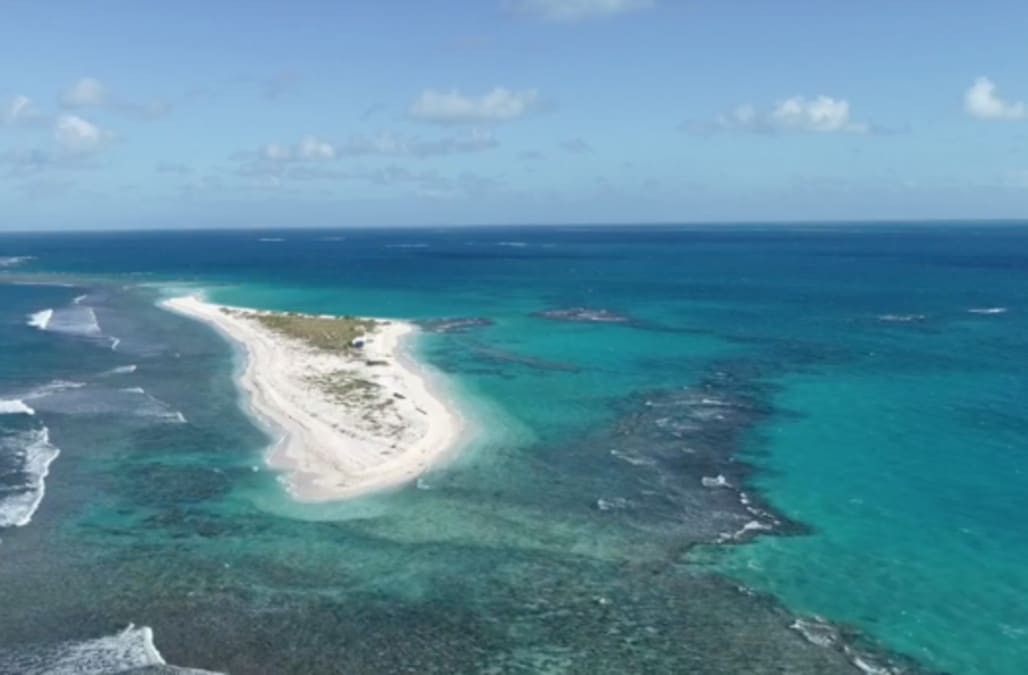 A powerful hurricane in the eastern Pacific washed away an 11-acre island in the French Frigate Shoals, part of a national monument in the remote northwestern Hawaiian Islands.

Approximately a half mile long and 400 feet wide, East Island was the second-largest islet in French Frigate Shoals ― an atoll some 550 miles northwest of Honolulu ― and a key habitat for the critically endangered Hawaiian monk seal, the threatened Hawaiian green sea turtle and several species of seabirds.

The island’s dramatic vanishing act was first reported by Honolulu Civil Beat and confirmed by HuffPost. Satellite images distributed by the U.S. Fish and Wildlife Service show the spit of white sand almost entirely erased, scattered out onto the reef to the north. The U.S. Fish and Wildlife Service did not immediately respond to a request for comment 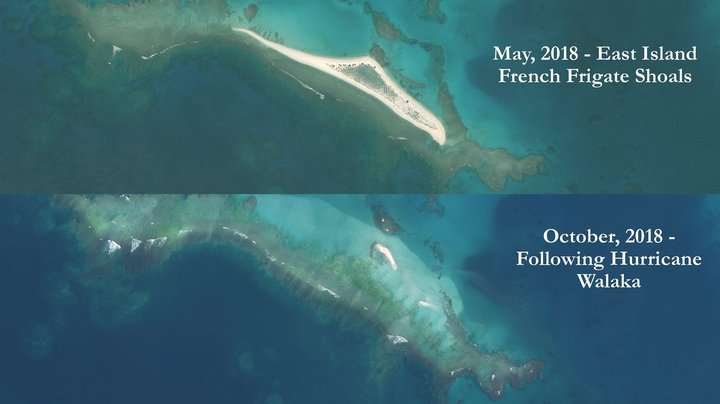 East Island was destroyed by storm surge from Hurricane Walaka, which roared through the northwestern Hawaiian Islands as a powerful Category 3 storm this month. Seven researchers, including three studying green sea turtles on East Island, were forced to evacuate from French Frigate Shoals before the storm.

Charles Littnan, the director of the National Oceanic and Atmospheric Administration’s protected species division, told HuffPost it will likely take years to understand what the island’s loss means for these imperiled species.

The biggest concern, he said, is the persistent loss of habitat, which has been identified as a significant threat to monk seals and green sea turtles. Nearby Trig Island was also lost beneath the surface this year, not because of a storm but from high wave activity.

“These small, sandy islets are going to really struggle to persist” in a warming world with rising seas, Littnan said. “This event is confronting us with what the future could look like.”

French Frigate Shoals is the nesting ground for 96 percent of the green sea turtle population, and approximately half lay their eggs at East Island. Historically, it has been the “single most important” nesting site for the turtles, he said.

All nesting females had left by the time Walaka hit, so the storm likely had little if any impact on the adult population. But NOAA scientists estimate that 19 percent of this year’s nests on East Island had not yet hatched and were swept away by the storm. And 20 percent of the turtle nests on nearby Tern Island, the largest island in the French Frigate Shoals, were lost.

The island was also a critical habitat for the federally protected Hawaii monk seal, one of the most endangered marine mammals on the planet. Roughly 80 percent of the population of just over 1,400 seals live in the northwestern Hawaiian Islands, a remote archipelago that is surrounded by the Papahanaumokuakea Marine National Monument.

In a typical year, 30 percent of monk seal pups are born at East Island. In 2018, 12 pups were born there, and NOAA said it believes that all but maybe one had been weaned before the storm hit.

Littnan said that monk seals are known to move into the water to ride out storms but that scientists won’t know if there was significant mortality until they are able to return to the area to survey the population next year.

Athline Clark, NOAA’s superintendent of Papahanaumokuakea, described the satellite images as “startling” and said that while the long-term implications are not clear, the island’s loss will have significant effects on future nesting and pupping cycles.

Before disappearing, East and Trig islands accounted for 60 percent of the monk seal pups born at French Frigate Shoals, according to NOAA.

Chip Fletcher, an associate dean at the University of Hawaii’s School of Ocean and Earth Science and Technology, told HuffPost that after an initial “holy sh*t” moment, he realized the island’s disappearance makes sense.

“This is not surprising when you consider the bad luck of a hurricane going into that vicinity and sea level rise already sort of deemed the stressor in the background for these ecosystems,” he said. “The probability of occurrences like this goes up with climate change.”

This month the Intergovernmental Panel on Climate Change, the leading United Nations consortium of researchers studying human-caused climate change, issued a dire warning about the threats the world now faces. Failing to overhaul the global economy and rein in carbon emissions would come with devastating, perhaps irreversible effects, the IPCC found.

The scientific community — including experts at NOAA — has long warned that anthropogenic climate change influences extreme weather events. The 2015 National Climate Assessment concluded that “hurricane intensity and rainfall are projected to increase as the climate continues to warm.”

Phil Klotzbach, a hurricane expert at Colorado State University, said the central Pacific is one area where a lot of models forecast that climate change will trigger more frequent and stronger hurricanes. He said Walaka rapidly intensified at an “impressive rate,” from a tropical storm with 40 mph winds to a major hurricane with winds of 120 mph in just 30 hours.

After reaching Category 5 strength, it weakened as it made its way north toward the national monument.

“The complete loss of the island is very impressive,” Klotzbach said after viewing the photos.

From satellite imagery and observations during a flyover of East Island and Tern Island, Littnan said, NOAA scientists expect that all the islets in French Frigate Shoals were completely washed over by the storm surge. It’s unclear if any others experienced significant damage.

There’s no telling if East Island will return. An islet named Whale-Skate Island, also once an important habitat for Hawaiian monk seals, vanished from French Frigate Shoals in the 1990s and has not reappeared.

Clark, Fletcher and Littnan said scientists are already exploring what, if anything, can be done to intervene to protect these vulnerable habitats and increase the resilience of the affected species. Those efforts could include pumping sand back above the ocean’s surface to restore islets.

“We’re going to have to look at really creative ways to help support these species to persist into the future,” Littnan said.

More from HuffPost US:
Scorpio Season Is Upon Us So Stock Your Panic Room And Sharpen Your Knives
Shockingly Racist Robocall Goes Out Against Andrew Gillum In Florida
New York Attorney Killed While Vacationing In Turks And Caicos