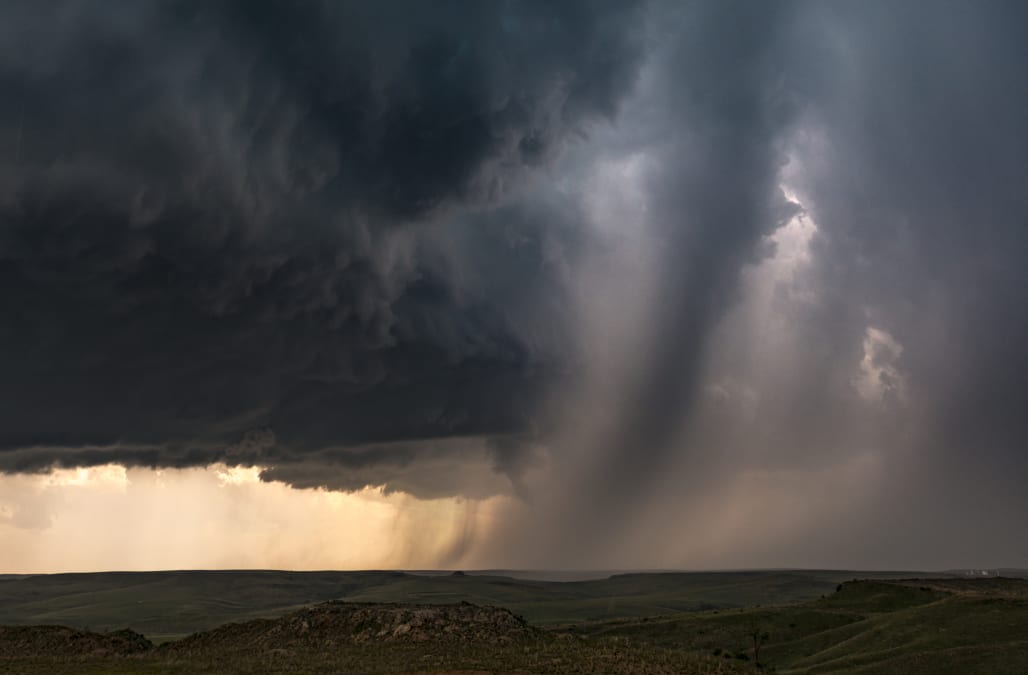 Evidence of a “Dixie Alley” — an eastward extension of the “Tornado Alley” in the central Great Plains — has been identified, according to a new study by Climate and Atmospheric Science.

Although tornadoes have been decreasing in Oklahoma, Texas, and Kansas, Texas still has the most tornadoes.

Alabama, Missouri, Tennessee, and Arkansas are the four deadliest states for tornadoes, according to the National Oceanic and Atmospheric Administration.

“More folks are generally at risk because of that eastward shift,” Victor Gensini, the study’s lead author, said.

13 things to do to prepare for a hurricane

Establish an emergency plan with your family.

The Department of Homeland Security says all families should come up with an emergency plan well before a disaster occurs.

Families should prepare their emergency kits (keep scrolling for a list of items to put in them) and determine what they will do in case of a necessary evacuation. Agree upon a reunion point for your family, and pick someone out of state who your family members to contact if you get separated.

Write down important phone numbers and keep them in your wallet, as cell phones may die during a disaster.

Prepare an emergency kit ahead of time.

The Red Cross recommends that all emergency kits include enough water for at least three days, with a minimum of one gallon per person per day.

Other suggested items include non-perishable food, a flashlight, a weather radio, a first-aid kit, medications, copies of important documents, cash, an emergency blanket, and a map of the area.

Jarrod Murrieta, head of claims catastrophe response at Farmers Insurance, told Business Insider that he also recommends buying a filtration device that can remove bacteria and parasites from water.

You may need to treat your water if you are waiting a long time for the storm to end.

You may lose access to clean drinking water during a severe storm. If so, it's best to boil water to make it safe to consume. If that's not possible, you can use bleach to kill microorganisms. Add 16 drops of bleach per gallon of water, stir the contents, and let them stand for 30 minutes.

If you are running low on water, avoid salty foods because they will make you thirsty. Instead, eat whole-grain cereals and canned foods that have a lot of liquid.

Don't evacuate unless officials recommend or require it.

Storm surge warnings are the most common reason for mandatory evacuation orders. To find out whether your area is being ordered to evacuate, sign up for your community's warning system, and pay attention to the Emergency Alert System and National Oceanic and Atmospheric Administration (NOAA) Weather Radio.

Evacuating without guidance from officials can be dangerous. Last year, when Hurricane Harvey hit, officials initially chose not to tell Houston residents to vacate their homes because they were hoping to prevent drivers from getting into accidents or getting caught in traffic on flooding roads. That decision was informed by chaos that ensued before Hurricane Rita in 2005, when 73 people died in Texas as about 3 million residents were trying to evacuate.

Find out where your local evacuation shelter is located.

In areas at risk of hurricanes, emergency shelters will likely be set up before the storm, and you can contact local officials or FEMA to figure out where these shelters are.

The Red Cross keeps a list of available emergency shelters, and you can search for open shelters by texting SHELTER and your zip code to 43362.

Prepare your home for heavy rainfall.

Start preparing for heavy rainfall by securing your rain gutters and clearing the drains.

Keep tarps and some cords to tie them down in case you need to patch up holes in your house.

When the storm arrives, flooding and downed power lines may also require you to turn off your power, so prepare to switch it off.

If you live in a flood-prone area, it's a good idea to waterproof your basement ahead of storm season and elevate your heating system, electric panel, and water heater. You can also install a sump pump and get a water alarm that will notify you when the system is overloaded.

Clear your yard before the storm hits.

Make sure there's nothing in your front or backyard that could get swept up in water or blown about by strong winds and cause damage to your home. Bring patio furniture, propane tanks, bikes, and other large objects inside.

Do not put tape on your windows.

If you apply duct tape to glass windows, extreme winds could make the glass break into larger and deadlier shards.

Instead, you should board up your windows with plywood and caulk the perimeters. If you are preparing far ahead of hurricane season, you can also buy wind-resistant windows and pull-down storm shutters.

During the storm, stay away from the windows to avoid getting hurt by broken glass. It is better to pass the time in a room without windows or inside a closet when the strongest part of the storm hits.

Prepare your car in case you need to evacuate.

Your car's gas tank should be full before a storm arrives in case you need to leave your house. Lines get long at gas pumps ahead of a storm, so take this step as early as possible.

If you're anticipating an evacuation order, make sure that your car has an emergency kit stored inside.

As with any outdoor furniture or decorations, any cars should be moved into your garage or under cover before a storm hits.

Do not attempt to drive through floodwater.

Driving through floodwaters is more dangerous than it may seem — 12 inches of fast-moving water is enough to sweep away a car.

If you can't see the bottom of a flooded area, you should avoid stepping into the water. A storm surge or flood can contaminate water with bacteria and chemicals. There could be sharp objects like nails or broken glass hidden from view, and puncture wounds can lead to tetanus or other infections. Downed power lines in the water may also expose you to electricity. And in some areas, you risk encountering snakes and fire ants in the water.

Take steps to insulate your clothing if you are in wet or cold conditions.

Stuffing your clothes with insulating material is the best way to maintain warmth, survival expert Tim MacWelch told National Geographic. You can use a range of items for this, including crumpled paper, leaves, or bubble wrap.

If you're trapped in wet or cold conditions, sharing body heat with another person is also a good way to stay warm. Or if you are able to access an object that has been heated, such as a stone or bottle, hold it between layers of your clothes. MacWelch said this is a safe way to help hypothermia victims.

Put a quarter in a cup of frozen water in your freezer.

Power outages can spoil everything in your fridge, and it may not be clear whether your food is safe to eat. An easy trick to determine whether items in your fridge might have spoiled is to fill a cup with water and put it in the freezer until the water is frozen. Then, put a quarter on top of the cup and return it to the freezer.

When you return, if your quarter hasn't moved, then you'll know that your electricity did not go out for a long time during the storm. But if the quarter is resting at the bottom of the cup, your food is no longer safe to eat.

The CDC also recommends that you lower the thermostat in your fridge and freezer to the lowest possible temperature. That will help your food stay fresh longer if the power goes out.

Clean your home quickly after a storm ends to prevent mold growth.

The CDC recommends that you clean and dry your home within 24 to 48 hours after a flood ends, if possible.

To air out your house, use fans to dry any wet areas and open the doors and windows. If you can't dry something quickly, it is best to throw it away.

You also need to remove and throw away drywall and insulation if it has been contaminated with sewage. Pay attention to leaks in the roof or walls as well.

If you spot mold, put on some protective equipment — ideally goggles, a N-95 respirator, and protective gloves — and clean it. According to the CDC, you should mix a cup of bleach with 1 gallon of water to clean off mold.

Data was obtained by the Storm Prediction Center’s online database from 1979 to 2017.

Gensini and tornado scientist Harold Brooks studied “significant tornado parameters” instead of the number of tornadoes.

The three ingredients of tornado conditions are wind speed and direction at different altitudes, and how unstable air and humidity is.

“This is what you would expect in a climate change scenario, we just have no way of confirming it at the moment,” Gensini said, as he explained how a decrease in moisture is causing the Great Plains to dry out.

Gensini and other scientists don’t believe the tornado changes are caused by global warming.