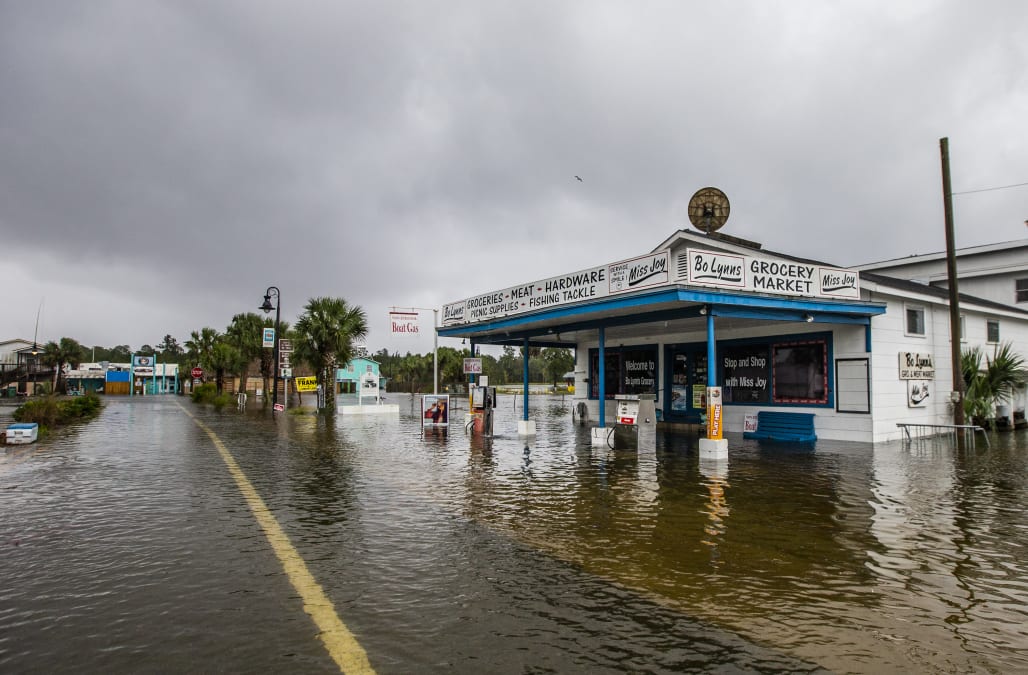 Hurricane Michael wreaked havoc in the Florida Panhandle on Wednesday, before touching down near Charlotte, North Carolina, on Thursday morning. The storm has since moved on to Georgia, and is expected to head northeast through the Carolinas and Virginia.

Even experts were surprised by how quickly the hurricane picked up speed. The storm began as a small tropical depression before escalating to a record-breaking Category 4 hurricane in just 72 hours.

Officials report that eleven people have died as a result of Hurricane Michael, while hundreds of thousands have been left without power.

Though the hurricane has since been downgraded to a tropical storm, it has already wreaked havoc in many Florida Panhandle neighborhoods.

Since the storm hit, residents of Panama City have seen their homes collapse, their roads flooded, and their storefront windows shattered. Officials say that four Florida hospitals have closed due to the storm, including two in Panama City, which have been forced to evacuate patients.

Take a look at the destruction captured by these before-and-after photos.

After: The market is submerged in water

Saint Marks witnessed minor flooding on Tuesday, which forced some roads to shut down. This included the only road that leads into and out of the town, which was blocked off ahead of the hurricane.

Before: The Cooter Stew Cafe in Saint Marks

After: The cafe begins to take on water

Businesses did their best to prepare for the storm by moving furniture. In 2005, the area fell victim to Hurricane Dennis, a Category 3 storm that killed 88 people.

Before: The intersection of Howard Street and Tallahassee Avenue on a sunny day in Saint Marks

After: 11-year-old resident Jayden Morgan evacuates his home due to flooding

By Wednesday, Saint Marks had been ravaged by flooding, with entire neighborhoods submerged in water.

Before: A pier in Panama City, Florida

After: The pier endures the outer bands of the hurricane

The hurricane made landfall just west of Panama City, which has been completely wiped out by the storm. Residents have been forced to evacuate, beachfront condos have been stripped of their roofs, and schools and hospitals have been torn apart.

After: Residents walk past damaged stores

"It's hard to convey in words the scale of the catastrophe in Panama City," one storm chaser tweeted. "The whole city looks like a nuke was dropped on it."

Before: Harrison Ave in Panama City

PANAMA CITY, FL - OCTOBER 10: Debris is seen after hurricane Michael passed through the downtown area on October 10, 2018 in Panama City, Florida. The hurricane hit the Florida Panhandle as a category 4 storm. (Photo by Joe Raedle/Getty Images)

Before: The Shell Point Beach community in Crawfordville, Florida

After: The community is ravaged by floods and fallen trees

Like Saint Marks, Crawfordville residents saw their roads blocked off on Tuesday ahead of the storm. Many of the area's coastal homes are weak or mobile structures, making them particularly vulnerable in a hurricane.

Before: An empty Shell Point Beach hours before the storm

The surrounding county, Wakulla, has kept a list of people who chose not to evacuate. The sheriff's office planned to check on them on Thursday.