Large swath of US braces for flooding, strong winds, heavy rains and snow 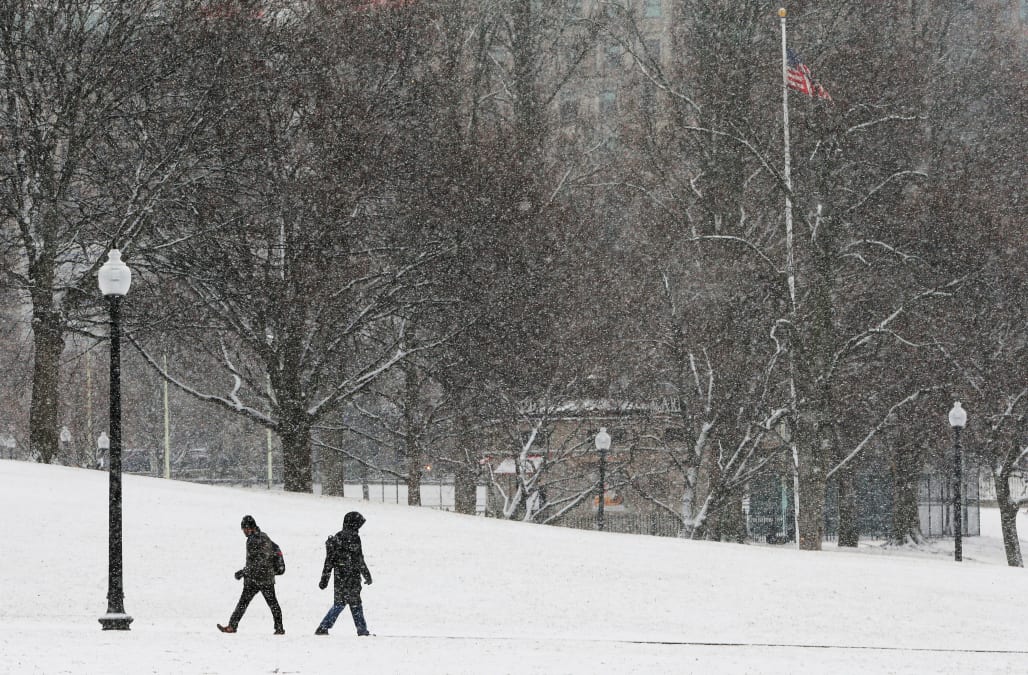 A complex storm will gain strength as it affects areas from the Great Lakes to the northeastern United States with strong winds, coastal flooding, heavy rain and a change to snow to end this week.

The same storm system set to bring a new round of severe thunderstorms and flooding to part of the South Central states will cause major travel disruptions and may have damaging consequences all the way to the New England and the upper mid-Atlantic coast.

The advancing and developing storm will mark an end to a couple of days of dry weather.

Rain will spread northeastward from the Tennessee and lower Mississippi Valley to much of the Ohio Valley, lower Great Lakes, central Appalachians and the mid-Atlantic region on Thursday.

Enough rain may fall to aggravate the flooding situation in the Midwest. Many rivers in the region are above flood stage. Some are at moderate or major flood stage.

Rain will transition to accumulating snow from west to east over the lower Great Lakes during Thursday and Thursday night.

'Bomb cyclone' as seen from space
(Photo via Colorado State University/NOAA)
Hey folks, GOES-E (formerly GOES-16) is in 1-minute rapid scan mode for today's impressive, explosive, high-impact… https://t.co/DKjHoZH1SM
FWIW...@NWSWPC just analyzed central pressure of 957 mb at 7 a.m. EST. A 53 mb drop in 21 hours, per their analyses… https://t.co/X9NGIma11J
Global perspective on just how expansive this Nor'Easter is... https://t.co/F5OIfwB6ZE
(Photo via Colorado State University/NOAA)
Impressive GOES-16 high resolution infrared satellite imagery showing explosive cyclogenesis/rapid intensification… https://t.co/VWg3kwkro4
It's not a hurricane but it has an "eye-like" feature where warmer air is trapped, encircled, or "secluded" by a be… https://t.co/UVSKib4e4i
https://t.co/x2OuTUB8BA
Down to 957 mb! https://t.co/BJ4noWv2lG
I like the 'true color' option for #GOES16 becasue it looks like an old-timey image you'd see in a textbook or on… https://t.co/HDxxzSY4OG
Amazing WV sat. You can watch the convective bands bubble up as warm air is lifted and intense precipitation is pr… https://t.co/IAIg3wUnpb
Airmass option is another winner. So many to choose from. #blizzard https://t.co/xB61L9QNYT
The @NOAA #GOES16 Geostationary Lightning Mapper continues to detect #lightning flashes in heavy snow on Long Islan… https://t.co/ZLP4wUVHE9
Sub-960mb extratropical low sitting near 37N latitude. Unbelievable. Deepening rate is over 2.9 Bergerons now. Th… https://t.co/a3eknGD4Ys
The many faces of our #blizzard today. Spectacular beasts from space. https://t.co/X98DBpntLY
Our nor'easter is opening its eye and saying good morning to GOES16 as the sun crests the horizon. Another image t… https://t.co/giT7bvi8ie
One minute interval visible satellite imagery as powerful coastal storm /Blizzard of 2018/ cranks off the East Coas… https://t.co/ykgAGDaa9X
Snowpack along the Southeast Coast left behind by the powerful cyclone now east of Atlantic City #gawx #scwx #ncwx… https://t.co/zICba0XjLz
Up Next

Storm impacts to spread into the northeastern US

A general 1-3 inches of snow is forecast from southeastern Minnesota and northeastern Iowa to western and central New York state and northern and western Pennsylvania during Thursday night.

Rain and snow will overtake much of New England.

As the storm strengthens, winds will increase dramatically over the Midwest and Northeast Thursday night and Friday.

Winds are likely to get strong enough to lead to major airline delays from Chicago to Detroit, Pittsburgh, Washington, D.C., Baltimore, Philadelphia, New York City and Boston. Winds may cause trouble for some flights as far south as Atlanta and Charlotte, North Carolina.

The wind is expected to become strong enough to break weak tree limbs and cause sporadic power outages.

"Strong winds over the Great Lakes will cause large waves and may cause ice to break up and move toward shore on lakes Michigan, Erie, Huron and Ontario," according to AccuWeather Meteorologist Jake Sojda.

Lakeshore flooding is also a concern along the southern shorelines.

Storm to become a potent nor'easter

As the storm moves into the Northeastern states, it will get another boost in strength as it reorganizes off the coast of southern New England during Thursday night and Friday. At this point, the storm may become a formidable nor'easter.

This is likely to become the strongest storm since the bomb cyclone from early January. There have not been many strong storms to affect the Northeast since early January.

While this storm will fall well short of that storm's intensity and will not be as cold, it will still pack a wallop in the Northeast, especially in southern and central New England.

People from Long Island to Maine should expect coastal flooding from the storm. The flooding will be the worst at times of high tide and made worse because of the full moon, which occurs on Thursday evening.

"Eastern Massachusetts to southern Maine is likely to experience the worst of the wind and coastal flooding from this storm," according to AccuWeather Senior Meteorologist Brett Anderson.

Offshore, seas are expected to build to 20-30 feet with occasionally higher waves. Small craft should remain in port during this storm.

RELATED:
2017’s catastrophic weather hasn’t convinced some US homeowners to properly prepare in 2018
Storm to renew severe weather, flooding risk in central US by midweek
What is bombogenesis?
Late-week storm to slam California with significant rain, snow and travel disruptions
Photos: 5 dead after severe storms tear from Arkansas to Kentucky

The first part of the storm will bring torrential rain to much of southern New England and the upper part of the mid-Atlantic. The intense rainfall alone may lead to significant disruptions in the heavily-traveled Interstate-95 corridor, mainly from Philadelphia on north to Boston.

As the storm strengthens over the nearby Atlantic Ocean, colder air will be drawn in and snow will advance toward the coast on Friday.

"Drenching rain and urban flooding issues will be followed by accumulating snow in the central Appalachians and perhaps farther to the east across central New England," Anderson said.

Areas from southwestern Ontario to western and central New York state have the potential for a 6- to 12- inch snowfall. This includes the Catskill Mountains in eastern New York state. Several inches may fall on the Poconos, Berkshires, Green, White, Adirondacks and Alleghenies. The hills in northern New Jersey are also likely to pick up a few inches of snow.

"Wet snow will probably mix near the end of the storm from Philadelphia to New York City and Boston," Anderson said.

However, for there to be a few inches of snow in these cities, conditions would have to evolve perfectly.

It is possible wet snow mixes in at the end as far south as Washington, D.C., but more likely dry air will just sweep in.

In the wake of the storm, blustery and cold conditions are in store Friday night and Saturday. During this time, winds may remain strong enough to continue to cause airline delays from Georgia to Maine.

More from Accuweather:
Cold air, snowstorms likely to make comeback in Northeast
Snow, record cold to plunge southward through western US
More snow to blanket Chicago, Detroit through this weekend