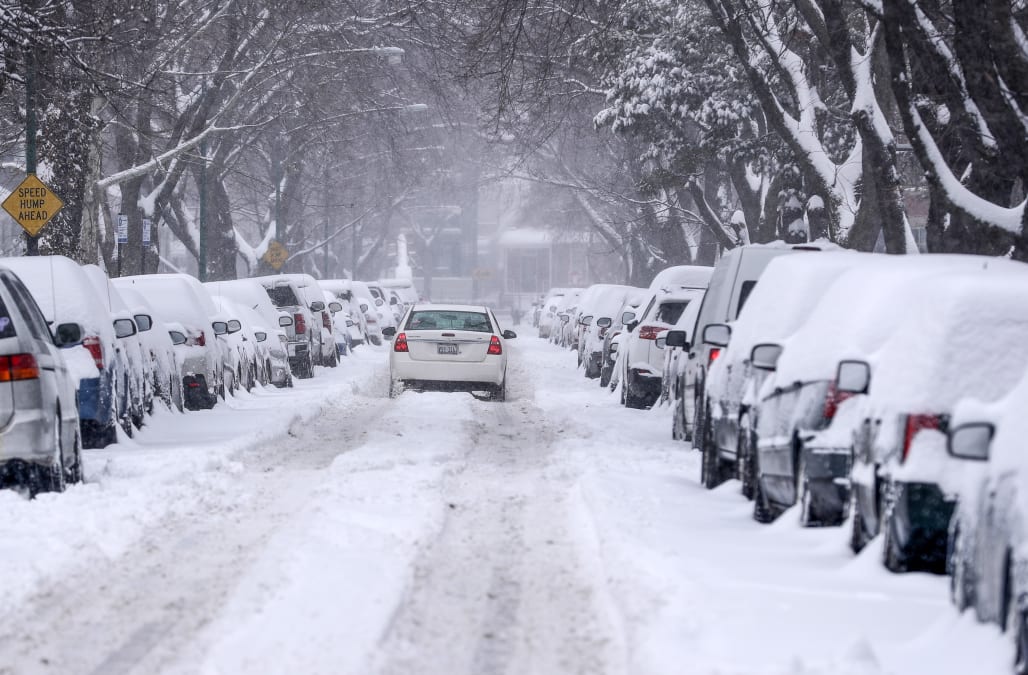 By Jonathan Belles and Linda Lamj for Weather.com

Winter Storm Polly will track through the central Plains and Midwest this weekend with another dose of heavy snow and a bit more ice.

This latest round of wintry weather comes on the heels of Winter Storm Oliver, which helped carve out a deep dip in the jet stream over the West last weekend. The low-pressure system associated with this next burst of snow is now tracking from the Southwest into the Plains.

Instead of swinging eastward like many troughs do this time of year, the trough of low pressure is lodged in place from the Southwest to the northern Plains due to a building and stagnant dome of high pressure located over the Southeast.

RELATED: Early 2018 winter weather across the US

Storm systems from the west are having to go northward and over that dome of high pressure, and Polly will do much of the same. By this weekend, the system will transit the Plains into the Midwest and potentially into New England. 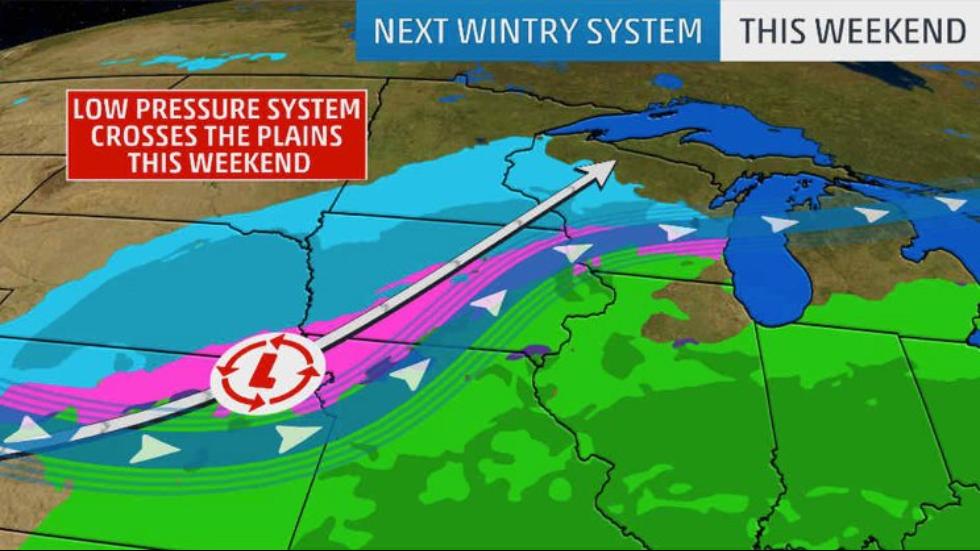 Snow is flying across parts of Kansas into Nebraska, the Dakotas, Iowa and southwestern Minnesota. Freezing rain is also occurring in parts of Iowa and northern Illinois and southern Wisconsin. 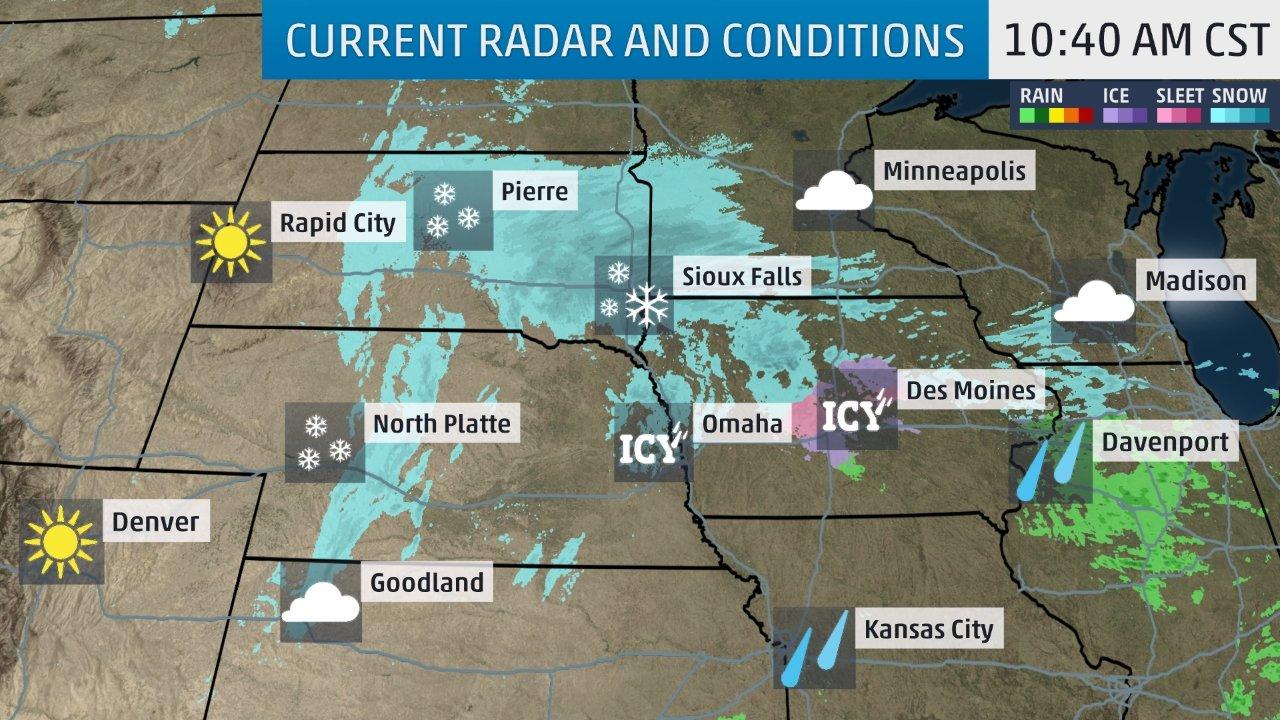 Snowfall will increase and become more widespread across parts of the central and northern Plains into the Upper Midwest later today.

Winter storm warnings are in effect in parts of the eastern and southern Minnesota, including the Twin Cities, as well as in northern Wisconsin into northwestern Michigan. A significant amount of snow is expected this weekend in this region, and travel will be dangerous. 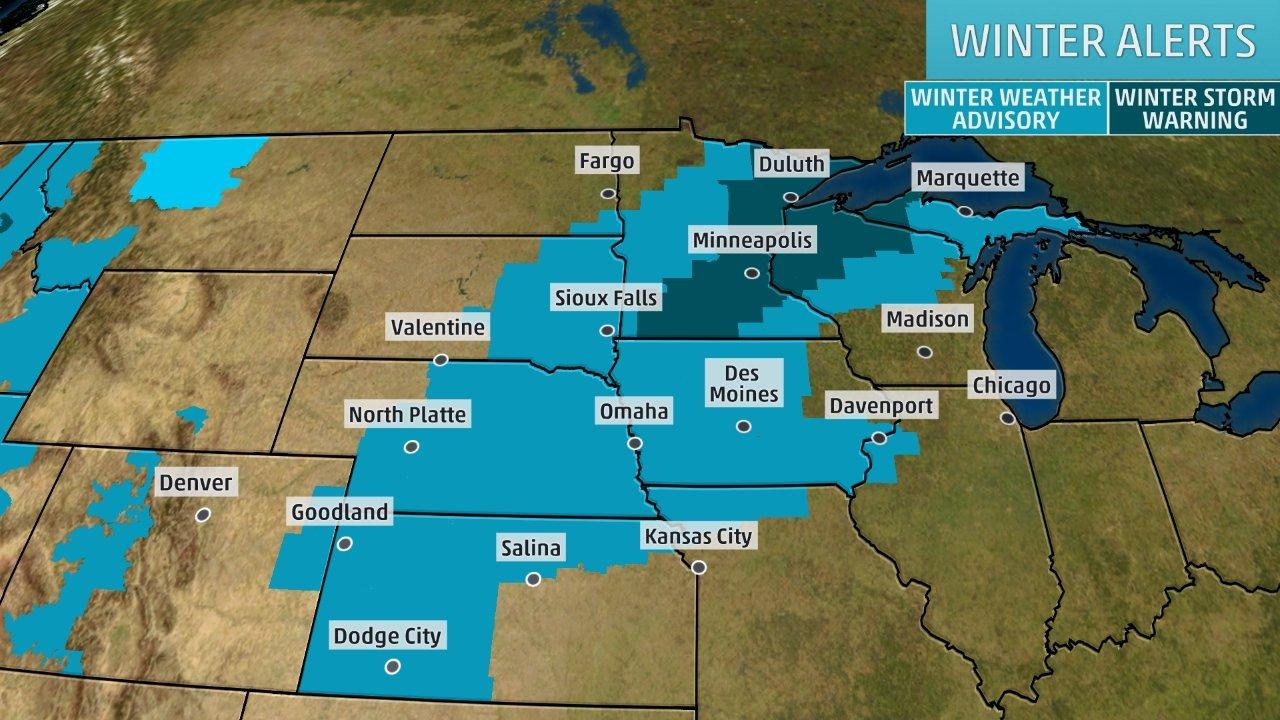 Winter weather advisories are in effect for portions of the central and northern Plains and the Upper Midwest. Driving in these areas could be hazardous due to reduced visibilities and blowing snow.

Here's what we know about this system, beginning with the timing followed by snowfall amounts. 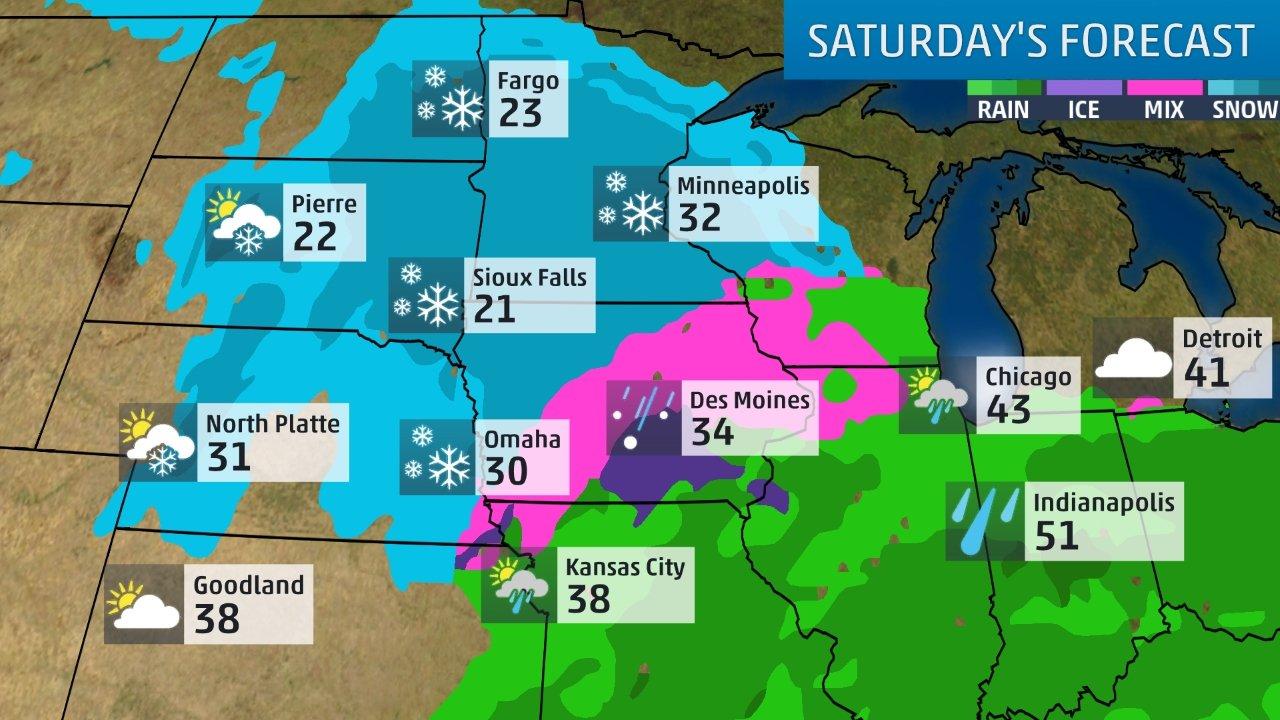 (MORE: Why Freezing Rain Really is the Worst) 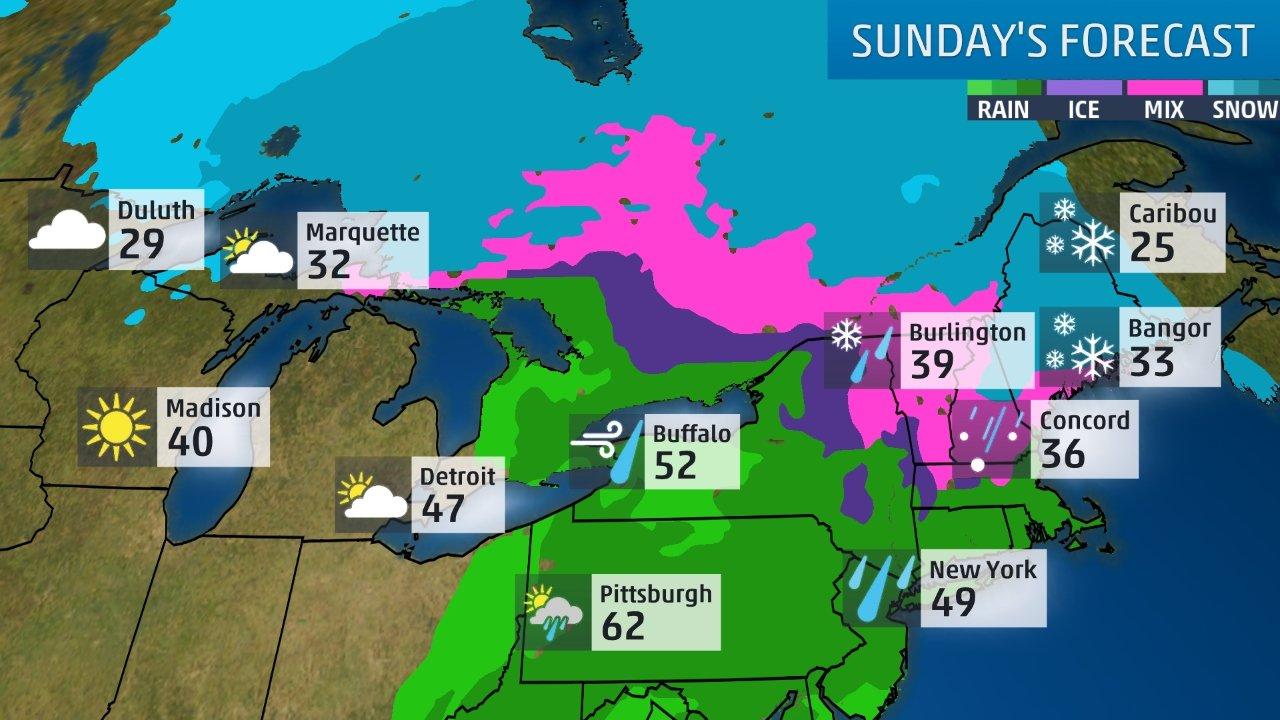 (MORE: After Flooding Rain, Severe Weather is in Play From Texas to Tennessee and Southern Illinois) 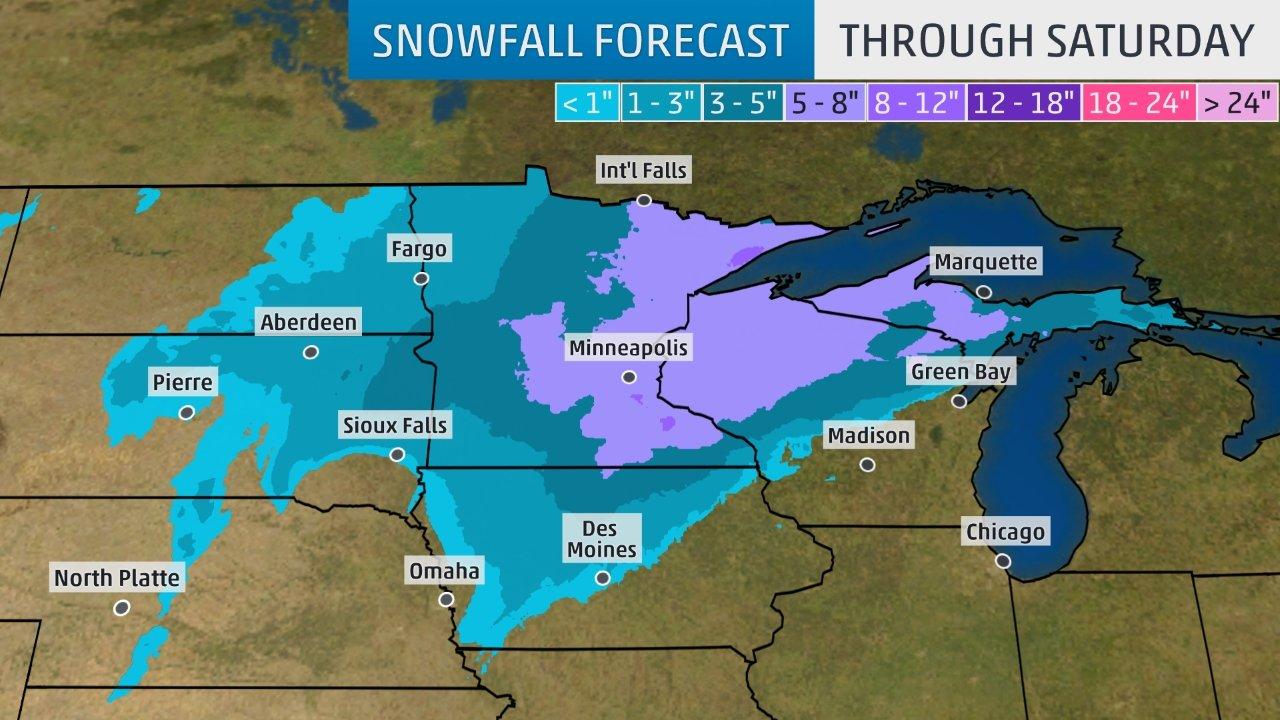 Below are top snowfall totals by state as of early Saturday:

Can't see much here, other than difficult driving conditions and delays on I-17 about 6 miles south of #Flagstaff. #azwxpic.twitter.com/08FsWmz2sB

Snow flurries have been seen even in the higher elevations around Las Vegas.

This is pretty amazing!! #VegasWeather#NVwxpic.twitter.com/I20HN6Pvuh

The Weather Company’s primary journalistic mission is to report on breaking weather news, the environment and the importance of science to our lives. This story does not necessarily represent the position of our parent company, IBM.