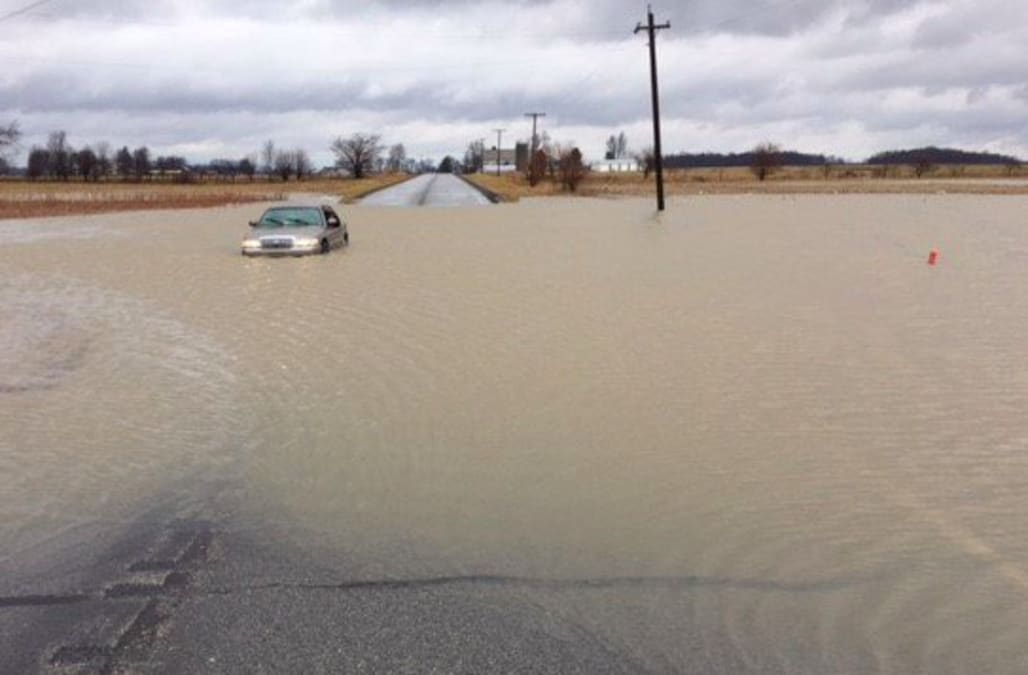 By  Ada Carr, Sean Breslin and Pam Wright for Weather.com

For thousands who live near waterways from Texas through Michigan, persistent flooding is expected to continue throughout the weekend.

So far, three deaths have been blamed on the floods this week, including a 1-year-old girl was found dead in standing water in her family's Michigan backyard Wednesday, state police told the AP. The child reportedly wandered away from her home in Fairplain Township and entered the water.

Another death was reported Wednesday near Stilwell, Oklahoma. Victor French, 53, was killed after attempting to drive across a flooded bridge and was swept off the road, the Oklahoma Highway Patrol announced.

Illinois State Police said a 52-year-old woman died early Tuesday morning when her vehicle rolled into a flooded ditch and was submerged along Illinois Route 45 near Peotone, the Chicago Tribune reported. Peotone Fire Chief William Schreiber told the Tribune that several other vehicles were recovered from the flooded intersection, but they didn't discover this particular car until hours later.

Major flooding was reported in parts of central Arkansas as floodwaters continued to rise Friday.

Near Arkadelphia, the Ouachita River burst its banks Friday, turning roads into rivers.

Ouachita River flooding and causing road closures. This is Hwy 51/8 (the only way into Arkadelphia from the east. @KATVToddYak@KATVNewspic.twitter.com/yzLop3gmnH

Flooding problems were reported in several parts of the Hoosier State.

In Elkhart County, crews in boats rescued residents from a dozen homes along the Baugo Creek, according to the AP.

Many drivers are going around our barricades. Please remember, the blockade is there for a reason. This car went around barricades & got stuck in high water on SR 331 in St. Joe Co. Luckily the driver is okay.

Please If you see a barricade, find another way. #TurnAroundDontDrownpic.twitter.com/Mcb5cfNPuY

(MORE: You Probably Don't Know This About Flooding Disasters)

Residents in Hebron were asked to evacuate their homes Friday after a levee breach along the Kankakee River.

South Bend Mayor Pete Buttigieg declared an emergency for the city because of the floods. In the city of Goshen, officials declared a local state of emergency and requested traffic be limited to emergency personnel, the AP also said.

Because of flooding along the Ohio River, the Horseshoe Southern Indiana Casino and Hotel in Elizabeth announced a temporary closure for the first time since 2015, WDRB.com reported. There was no timetable for the hotel's reopening.

Gov. Matt Bevin declared a statewide emergency in response to heavy rains that have been plaguing the state since Feb. 9. In addition, the State Emergency Operations Center received 14 individual county declarations. The order will be in place for 30 days, allowing resources to be prepared to help affected areas.

Meanwhile, search and rescue teams have been put on standby for additional rainfall expected this weekend, WPSD reports.

In Ottawa, volunteers came to the aid of employees at the LaSalle County Nursing Home when they requested help evacuating residents from the facility Tuesday night, NPR reported.

Residents had to be evacuated in parts of Niles Thursday after the St. Joseph River surpassed a 50-year high, MLive.com reported. The waterway crested at roughly 17.33 feet.

Coast Guard officials said Thursday that they rescued over 40 people and their pets from flooded homes, according to the AP.

In Lansing, at least six neighborhoods were issued voluntary evacuations in areas where the Grand River was expected to overtake homes, the AP also said. Residents worked tirelessly to keep the water out of their homes, but some have been overwhelmed by the amount of water that has invaded.

"After the water started coming into the basement, there was just nothing we could do," resident Michael Ezzo told the Lansing State Journal.

In the Cincinnati area, the Ohio River remained swollen as officials prepared for additional rainfall.

Many roads and businesses have been closed in and around the city because of the flooding.

Ohio University in Athens canceled all classes Monday "in anticipation of severe weather and potential flooding."

About 20 homes had to be evacuated in southern Rockwall – a Dallas suburb about 20 miles northeast of the city – after Rockwall Lake overflowed Thursday, the AP reported. Nobody was injured, though several homes were flooded, the report added.

Residents had to be removed from their flooded homes near White Rock Creek in Dallas as water levels rose rapidly late Tuesday night, according to the NWS. Northeast of Dallas, many roads were flooded in the Wylie area Tuesday night, the NWS also said.

In Dallas, rescue crews have been searching for people who may have been inside of a white vehicle that was seen floating in the Trinity River Wednesday, NBCDFW.com reports. Police say a witness told them they spotted the car driving into the water before it was swept away. Dive teams are currently searching the waterway.