This Utah lightning storm looks like a dystopian nightmare 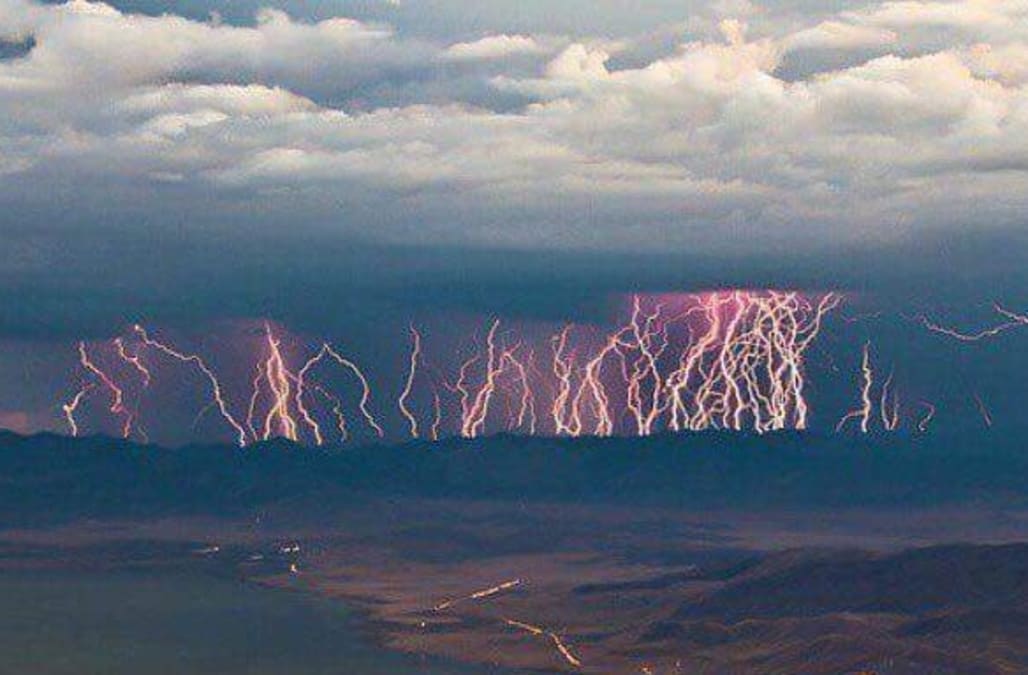 On Thursday, January 18, Reddit user allthekos shared an incredible photo of a lightning storm that took place near Lake Utah.

While it is unclear when the image was captured, one thing we know for sure is that mother nature can be frighteningly captivating.

Fellow Redditors were quick to comment that wild lightning storms hit Utah quite frequently -- most often during the summer -- which has caused wildfires in the past, especially when there is little to no rain.

Other users familiar with Utah's various mountain ranges speculated that the image was most likely captured near undeveloped land in Geneva close to a few industrial sites.

See the amazing photo below: 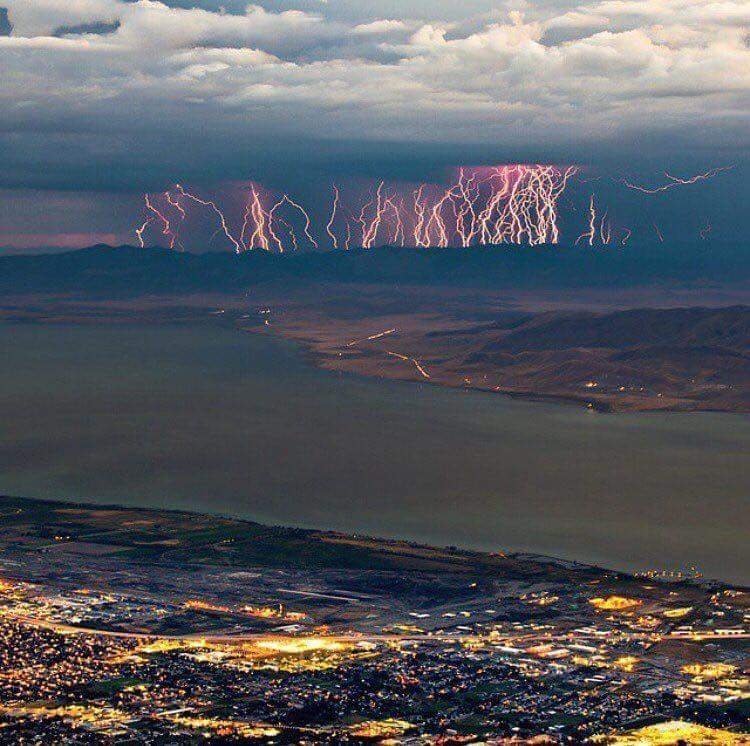 For more amazing lightning storm photos click through below:

Lightning: 'Nature's fireworks'
Lightning strikes over buildings during heavy rainfall in Kunshan, Jiangsu province, September 2, 2014. Picture taken September 2, 2014. REUTERS/Stringer
Volcanic lightning is seen at an eruption of Mount Sakurajima, in this photo taken from Tarumizu city, Kagoshima prefecture, southwestern Japan, in this photo taken by Kyodo February 5, 2016. A Japanese volcano about 50 km (30 miles) from a nuclear plant erupted on Friday, Japan's Meteorological Agency said, sending fountains of lava into the night sky. Mandatory credit REUTERS/Kyodo ATTENTION EDITORS - FOR EDITORIAL USE ONLY. NOT FOR SALE FOR MARKETING OR ADVERTISING CAMPAIGNS. THIS IMAGE HAS BEEN SUPPLIED BY A THIRD PARTY. IT IS DISTRIBUTED, EXACTLY AS RECEIVED BY REUTERS, AS A SERVICE TO CLIENTS. MANDATORY CREDIT. JAPAN OUT. NO COMMERCIAL OR EDITORIAL SALES IN JAPAN. TPX IMAGES OF THE DAY
Mass lightning bolts light up night skies by Daggett airport from monsoon storms passing over the high deserts early Wednesday, north of Barstow, California, July 1, 2015. Picture taken using long exposure. REUTERS/Gene Blevins
Lightning strikes over Lake Maracaibo in the village of Congo Mirador, where the Catatumbo River feeds into the lake, in the western state of Zulia October 22, 2014. This year the Catatumbo Lightning was approved for inclusion in the 2015 edition of Guinness World Records, dethroning the Congolese town of Kifuka as the place with the world's most lightning bolts per square kilometer each year at 250. Scientists think the Catatumbo, named for a river that runs into the lake, is normal lightning that just happens to occur far more than anywhere else, due to local topography and wind patterns. Picture taken with long exposure October 22, 2014. REUTERS/Jorge Silva
Lightning strikes over a power station during a storm in the city of Ashkelon October 28, 2015. REUTERS/ Amir Cohen TPX IMAGES OF THE DAY
A monsoon lightning storm strikes the Mandalay Bay Resorts and Casino (L) and Luxor hotels in Las Vegas, Nevada late July 7, 2014. Monsoon storms are forecast for the the rest of the week in the Nevada and Arizona states. The Luxor Sky Beam can be seen shining into the sky from the top of the hotel's pyramid structure. Picture taken July 7. REUTERS/Gene Blevins (
A streak of lightning is seen above the skyline of Nanning during a thunderstorm in Guangxi Zhuang Autonomous region June 5, 2014. Picture taken June 5, 2014. REUTERS/Stringer
A lightning storm is pictured over the sea near the popular tourist destination of Cancun August 13, 2013. REUTERS/Victor Ruiz Garcia
Lightning strikes over a pier during a storm in Atlit, near the northern Israeli city of Haifa October 25, 2012. REUTERS/Baz Ratner
Volcanic lightning or a dirty thunderstorm is seen above Shinmoedake peak as it erupts, between Miyazaki and Kagoshima prefectures, in this photo taken from Kirishima city and released by Minami-Nippon Shimbun January 28, 2011. Ash and rocks fell across a wide swathe of southern Japan straddling the prefectures of Miyazaki and Kagoshima on Thursday, as one of Mount Kirishima's many calderas erupted, prompting authorities to raise alert levels and call on for an evacuation of all residents within a 2 km (1.2 miles) radius of the volcano. REUTERS/Minami-Nippon Shimbun/Handout
Lightning strikes over Prague's suburban neighbourhood during an overnight storm July 17, 2009. REUTERS/PETR JOSEK
Lightning strikes near the town of Searchlight, Nevada as the first storm of the season passes through the western deserts of the United States in the early hours of June 8, 2006. REUTERS/Gene Blevins (United States)
Lightning is seen over south Mumbai's skyline before the first pre-monsoon showers May 31, 2007. REUTERS/Arko Datta (INDIA)
ITALY - 2016/06/24: A discharge of lightning. Following a strong disturbance traveling on the Ionian Sea on the coast of Calabria and Basilicata was struck by a strong lightning storm. According to some surveys Radar, in three hours have flared over 2000 lightning strikes in this area. Many believe that the particular event is due to climate change. (Photo by Alfonso Di Vincenzo/Pacific Press/LightRocket via Getty Images)
Up Next